Henry Jeffreys
No Comments on Fenjiu, baijiu for beginners

Despite being one of the bestselling spirits in the world, baijiu has not had much commercial success outside Chinese markets. But one state-owned producer, Fenjiu, has its eyes firmly on Western markets with an accessible, cocktail-friendly spirit. We spoke with Qiqi Chen, MD at the UK distributor, to find out more.

Whenever the subject of baijiu comes up, someone will pull a face and say how disgusting the Chinese spirit is. It seems like one of those things, like the rotten shark flesh that’s popular in Nordic countries, that will always struggle to cross cultures. But, as I learned at an event at the Excel in London, baijiu (pronounced ‘buy Joe’) is a very broad church. The occasion was the World Chinese Entrepreneurs Convention: there were western companies like Aston Martin, Barratt Homes and Lindores Distillery looking to sell to the Chinese, and Chinese companies looking to sell into western markets. At one point a crowd of dignitaries interrupted my tasting, apparently Liz Truss had arrived. I got excited thinking it was the author of Eats, Shoots and Leaves, but apparently she’s the business secretary or something, and was showing around the Chinese ambassador to the UK, Liu Xiaoming. 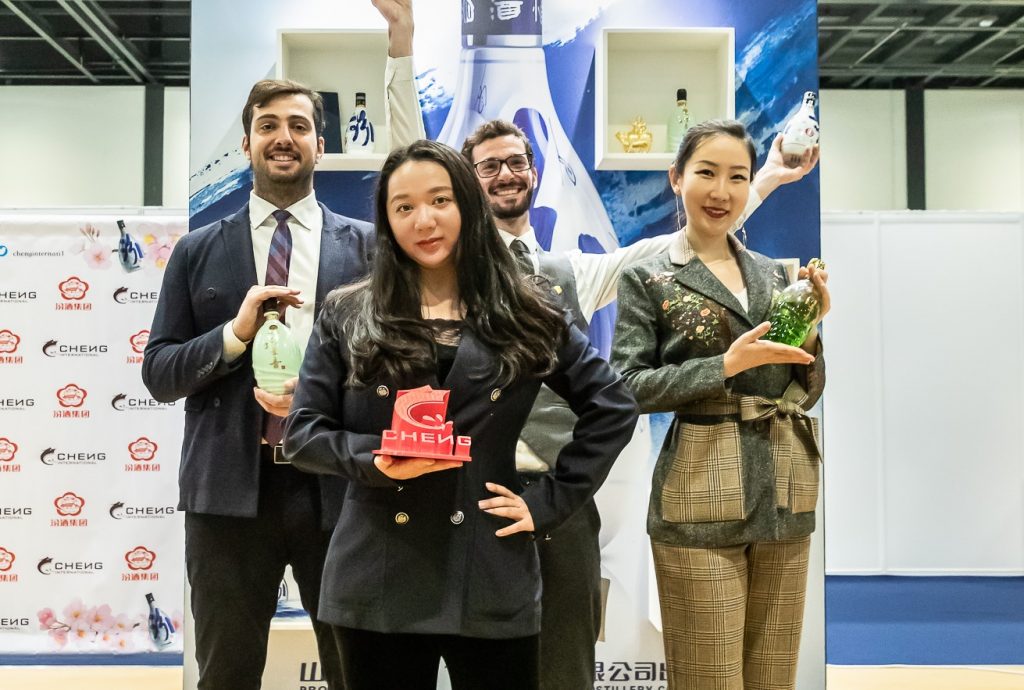 Team Fenjiu: QiQi Chen on far right, next to her, Andrea Dionori

Aiming to change people’s perceptions of baijiu is Qiqi Chen, MD of Cheng International, the distributor of Fenjiu in the UK. She trained with William Curley, the chocolatier, and speaks excellent, London-accented English. Before we did any tasting, she explained a little about baijiu. There are four main types with different production methods: light aroma, rice, strong aroma and sauce aroma.. The last two are particularly funky and may be to blame for people’s prejudices against the spirit. “Some categories of baijiu available in the west are very heavy, very soya,” she told me. “There’s a big culture clash. Maybe you’ll be ready for them in 20-30 years, but that’s not something you start with.” She compared it with starting your Scotch whisky journey with Islay single malt.

Another reason some might be wary of baijiu is because many people, particularly journalists, have only tried it as guests at a Chinese feast and had a bit too much to drink. It’s the local hospitality: “We want to make you happy so we encourage you to drink,” she said. “We don’t drink like that every day.”

She works with Fenjiu, a state-owned enterprise with a long history. It is based in Fenyang in Shanxi province in northern China. Apparently, the company and the spirit date back 6,000 years, though there is no evidence that the Chinese were distilling alcohol much before the 13th century AD. But what is clear is that alcohol has been made from local grains here for a very long time. 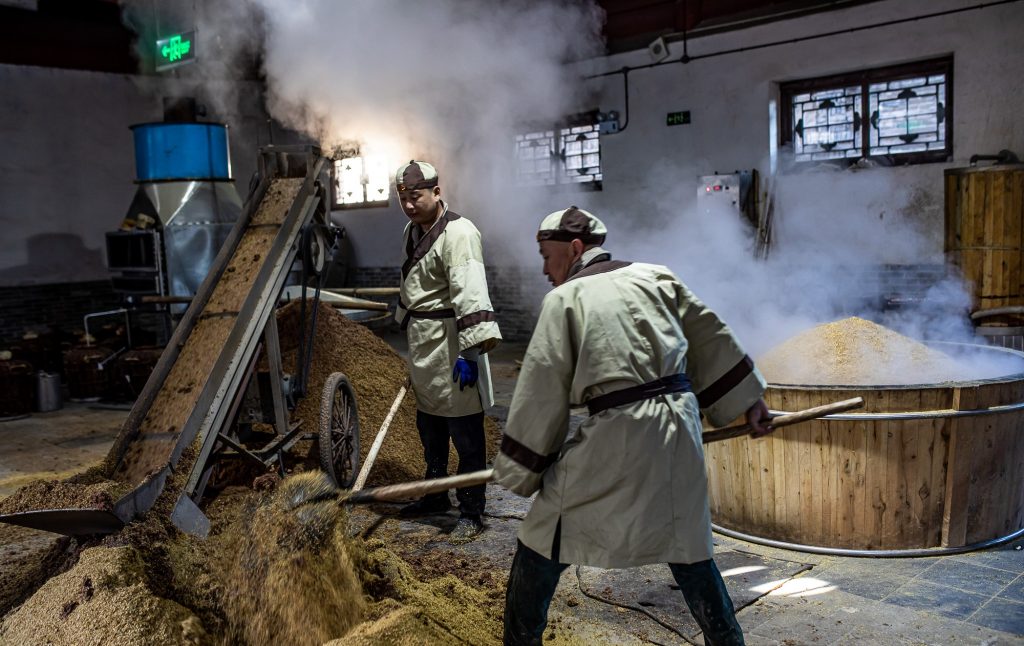 Preparing the Sorghum for Fermentation

The techniques used to make Fenjiu are worth explaining. It is made from sorghum. First the grains are steamed for eight hours until they form a sort of jelly. Then they are fermented using a starter culture called daqu. This is made from a mixture of peas and barley which are formed into bricks and left to mature for three months. Fermentation takes place over 28 days in pits which are never cleaned and waste from distillation is added to them. So, rather like the dunder pits used to make high-ester Jamaican rum, you’re going to get lots of yeast and bacteria, and lots of wild flavours.

Distillation takes place in a stainless steel pot still. At Fenjiu, two batches are made. Solid fermented sorghum is layered in the still and the first batch is distilled once. The heads are added back for redistillation. The heart is then kept aside. Then more fermented sorghum is added to any undistilled mash and re-fermented. This is then distilled with the tails from the first batch. The two batches are blended together and aged in clay jars to mature. The colour doesn’t change with age but the spirit does mellow, becoming more acidic. The spirit is then diluted with spring water and marketed under age statements such as 30 years old (not a minimum age, more like an average).

We tasted the baijiu out of traditional bamboo (actually made from china) cups. Gingerly, I took the first sip of the 30 year old Fenjiu. And you know what? It’s not half bad. There was definitely a funky edge with earthy notes, vinegar and some acetone, but it had the most delicious umami texture and is incredibly complex. The flavour builds with each sip. I tried some other age statements too, and they varied in intensity and ABV but all had wonderful aromatic notes of jasmine, eucalyptus, and that texture. Chen said: “Light aroma baijiu is similar to what western people have been drinking, but at the same time different.” 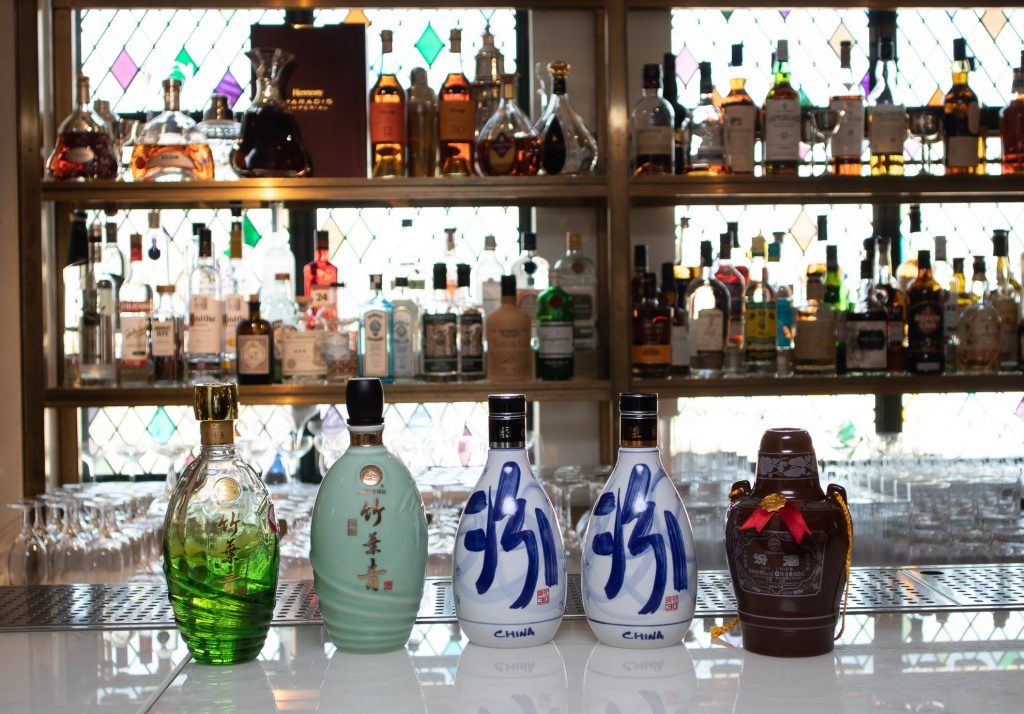 Next we moved on to the flavoured baijiu. There was a honey one that had something of the Drambuie about it, and then two bamboo-flavoured ones: a ten year old, with grassy funky flavours akin to a rhum agricole and an intensely-flavoured 30 year old which came across like Green Chartreuse.

In China, these are all drunk neat but, in May last year Fenjiu announced a cocktail competition in order to open up western markets,. The winner was Italian bartender Andrea Dionori from Milroy’s of Soho. He now works as a brand ambassador for Fenjiu and gave me some cocktails to try. Baijiu can be tricky to mix, according to Dionori. That creamy texture comes from ethyl lactate; dilute it too much and you lose the creaminess and just get acetone, but “add water and you make it harsher,” he said. One cocktail made with 10 year old Fenjiu blended with Cocchi Americano and lychees was odd but not unpleasant with the tang of the baijiu coming through strongly. More successful was a blend of five year old bamboo-flavoured spirit with bitters and ginger ale.

The aim with the cocktail competition and food pairing initiatives, such as a collaboration with her former employer William Curley, Chen told me, is to change baijiu’s hard-drinking image to make it “more sophisticated and appeal to younger, trendy consumers.” It’s clearly the work of years but baijiu is not going to go away, so it might be time you lost your fear. Fenjiu is the perfect place to start.

In celebration of Chinese New Year, Fenjiu will be taking over Harry Gordon’s Bar at Selfridges in London until 2 February offering baijiu tastings and cocktails.

Master of Malt @MasterOfMalt
19 hours ago
If you love an old single malt but don’t want to pay rare Scotch prices, then you should be looking at Armagnac. @Lauren__Eads takes a look at this underrated brandy.

Master of Malt @MasterOfMalt
21 hours ago
Rum is superb for laid-back summer sipping – explore an array of remarkable expressions from around the world in our #Rum Festival!