Cocktail of the Week: The Snowball

Henry Jeffreys
No Comments on Cocktail of the Week: The Snowball

It’s time to get out the shagpile rug, stick some Slade on the stereo and regret chucking out that avocado bathroom, because the most 1970s cocktail ever is back; it’s the Snowball!

It’s a commonplace of TV chefs that Christmas isn’t Christmas without a certain something e.g. mince pies, clementines or family arguments. Well, there really was one drink which (in Britain at least) was synonymous with the holiday season, the Snowball, a mixture of advocaat and lemonade. And then it disappeared as everybody became sophisticated and switched to prosecco and New Zealand Sauvignon Blanc. That unloved bottle of advocaat sat at the back of the cupboard going crusty and unpleasant. By the time I could legally drink way back in the mid 90s, the Snowball was already something of a joke in popular culture. It was laughed about but never made. I have to admit that before I started writing this column, I had never tried a Snowball. I’d never even tried advocaat. And I call myself a drink writer. 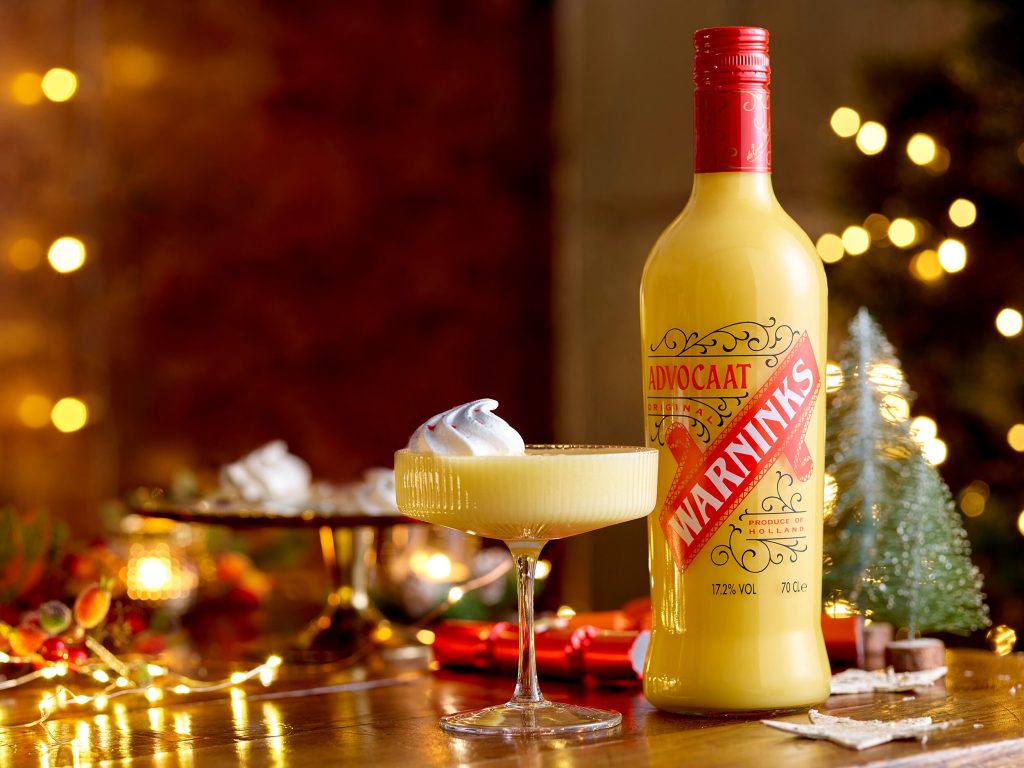 Snowball cocktail with a bottle of Advocaat, in a warm festive setting.

Advocaat is a traditional Dutch liqueur made from a mixture of egg yolks, vanilla, sugar and alcohol, (the leading brand, Warninks, is part of the mighty De Kuyper group). It’s essentially boozy custard and who doesn’t like boozy custard? The combination of eggs and booze is an ancient one. There are many old English recipes for drinks like possets and flips involving alcohol, spices, milk or cream and eggs. Some of these would have been heated with a red hot poker. An ale treated as such was said to be ‘nogged’ which is one possible derivation of the word eggnog. Though it might have come from England, the Americans really took to nogging in a big way. David A. Embury in The Fine Art of Mixing Drinks has a whole subchapter on ‘nogs’; there are many different kinds but all contain eggs, alcohol or some sort, milk and/or cream and sugar, lots and lots of sugar. So not that different to advocaat. Incidentally, the word probably comes from the Dutch for lawyer.

Eggnog rather died out in the old country perhaps because we had the Snowball, which is thought to have been invented some time in the 1940s. It was in the ‘70s, however, that the Snowball reached its apotheosis only to become something of a national embarrassment. This might be because so many people of a certain age began their drinking experiences with an illicit Snowball or two. After all it is essentially boozy custard, much easier on a youthful palate than wine or beer.

But that was all a long time ago and a younger generation don’t have the same cocktail hang-ups. The Snowball is being upgraded for the 21st century. You can even buy it in cans now to make the last train home after the Christmas party even more fun. There are fancy versions available: Difford’s Guide lists a Snowball made with Champagne and fino sherry.

But for my first Snowball I thought I thought should keep it trad. Though to be properly 1970s, I should have used R White’s Lemonade and omitted the lime juice. I don’t think I saw a lime in Britain until about 1991. And the result? Well, it’s absolutely delicious. In fact, Warninks advocaat neat is pretty damn tasty. Make sure you keep it refrigerated as people in the office have shared lurid stories of what happens to an open bottle of advocaat left in a warm cupboard. Think of the eggs, people.

Shake the advocaat and lime juice in a shaker with ice, pour into an ice-filled highball glass, top up with lemonade and stir. Or you can serve it straight up in a coupe, just make sure you use chilled lemonade.