Lauren Eads
No Comments on Cocktail of the Week: The Singapore Sling

This week’s cocktail was invented at one of the world’s great hotels, Raffles Hotel in Singapore.  Well, probably, the Singapore Sling has a convoluted and fascinating history as Lauren Eads finds out.

There’s few cocktails more famous than the Singapore Sling. Born at the turn of the century in colonial Singapore, it screams frivolity with its luminous pink hue, foamy top, lemon slice (sometimes pineapple) and glacé cherry garnish. In the hands of some, it can be a dangerously garish cocktail that would be tacky if it weren’t such a classic. But there is method to its madness, amid a convoluted history.

It’s widely reported that the Singapore Sling was created in 1915 (or thereabouts) by bartender Ngiam Tong Boon at Raffles Hotel in Singapore. At that time the hotel’s Long Bar had become a popular gathering spot, positioned near the newly improved rail and road systems that brought rubber and palm oil plantation owners over to Singapore from Malaya every weekend. So much so that it had become known as ‘the ‘Rendezvous of Planters’.

Men were a firm fixture, of course, but what’s more curious is a twist that would see the Singapore Sling intertwined with (some kind of) feminism. At the time, women were not allowed to consume alcohol in public. Instead they were reduced to drinking only juices and teas to “save their modesty”. What a drab way to spend an afternoon. 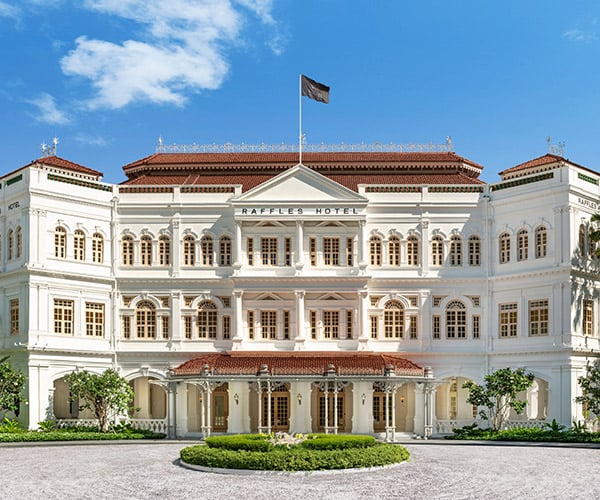 Where it all began, probably, Raffles Hotel in Singapore

A man ahead of his time

Tong Boon, who was either a feminist or a capitalist, saw an opportunity to create a beverage that appeared non-alcoholic (hence the juicy appearance and bright colour), but was actually infused with a kick of gin.

Today, Raffles lists the recipe as being made with gin, pineapple juice, lime juice, Triple Sec and Bénédictine D.O.M. Tong Boon is said to have added grenadine and cherry liqueur to turn the serve pink, supposedly chosen to give it a “feminine flair”.

The clandestine cocktail became a hit with women and men alike, and so it is to this day. That’s how the Raffles story goes, but where cocktails lead, controversy often follows.

In 2011, journalist and cocktail historian David Wondrich found contradictions to the Raffles tale having trawled through old newspapers, unearthing references to ‘Slings’ throughout the late 1890s, twenty years before Tong Boon’s invention.

The Sling cocktail is well documented with origins in North America (spirit, soda water and sweetened with sugar). But he also unearthed references to ‘Pink Slings for pale people’ as early as 1903 – still a decade or so before Raffles lays claim to the pink drink.

By the time Harry Craddock’s 1930 Savoy Cocktail Book was published we find three similar yet distinct cocktails; the Gin Sling, the Singapore Sling and the Straits Sling. 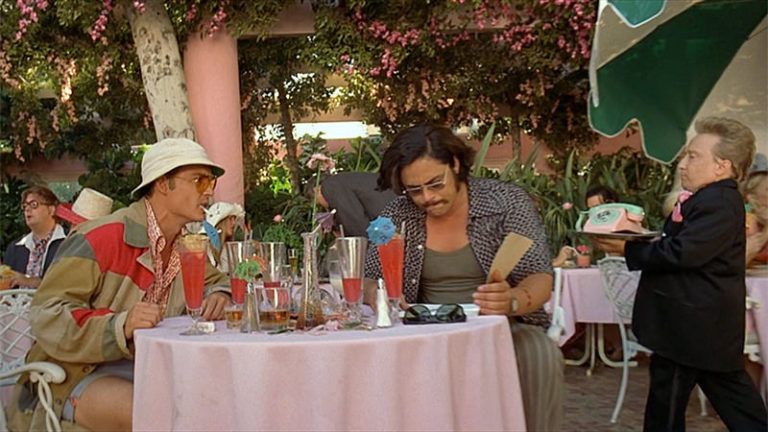 Hunter S. Thompson (Johnny Depp) enjoying a Singapore Sling or two in the film of Fear and Loathing in Las Vegas

So who added the grenadine?

But neither call for pineapple juice or grenadine like the Raffles’ ‘classic’ recipe. So, how did they come into the mix? Simon Difford from Difford’s Guide posits that they were added in the 1970s to appease a growing taste for sweeter, tiki-style drinks, while also making use of the abundance of pineapples in Singapore. This is a likely assumption – the Singapore Sling’s heyday was no doubt the ‘70s.

Hedonist and literary legend Hunter S. Thomson might have helped raise its cool. Thought to be one of his favourite cocktails, he makes reference to a session of drinking Singapore Slings “with mescal on the side and beer chasers” in his 1971 classic Fear and Loathing in Las Vegas (though admittedly Thompson referenced a lot of drinks throughout his literary career).

The Singapore Sling has had a confusing journey, full of mystery and misnomers. My take? Tong Boon’s drink most likely began as a Gin Sling at Raffles (sugar, gin, ice, topped up with soda), probably transformed into a Straits ‘pink’ Sling (with the addition of Benedictine, cherry brandy and bitters), and later gained the name ‘Singapore’, which had a more internationally-appealing ring to it. Pineapple and grenadine were completely arbitrary additions, which ironically is what most now associate with a Singapore Sling…

So, while variations exist, I see two closely related versions of this classic; the sweeter Raffles ‘Singapore Sling’, and the pared back drier ‘Straits Sling’. Here’s how to make them both. 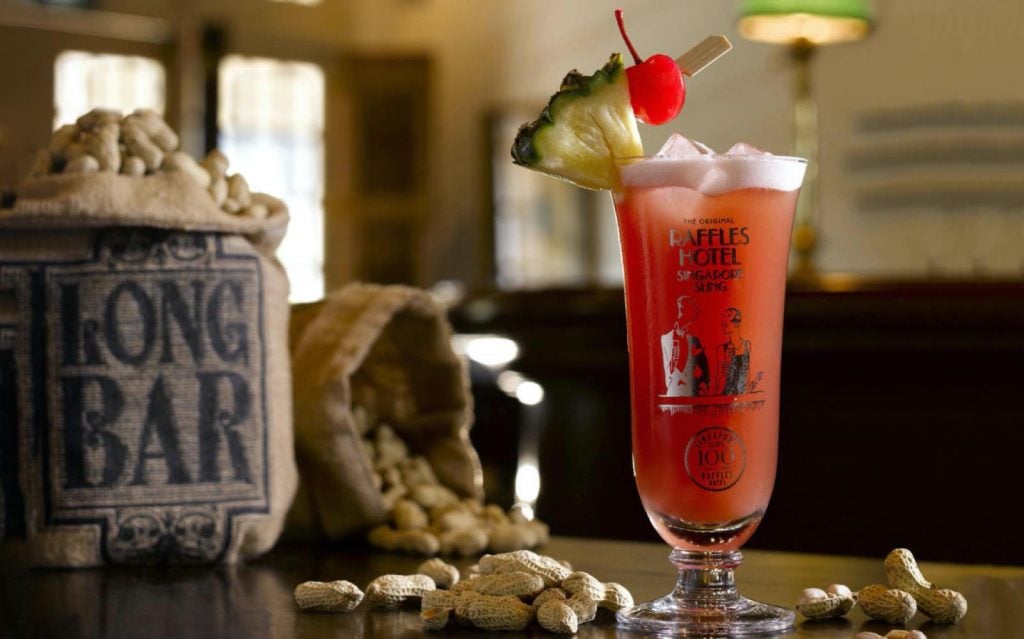 Singapore Sling (according to Raffles Hotel)

Shake all ingredients with ice and strain into a Hurricane (Sling) glass. Top up with soda and garnish with a lemon slice and cherry on a stick.

Straits Sling (according to Harry Craddock in 1930 Savoy Cocktail Book, made for six)

Shake well and strain into a glass. Top with soda water and ice.