Cocktail of the Week: The Red Devil

Henry Jeffreys
No Comments on Cocktail of the Week: The Red Devil

Today we’re getting all diabolical with a special smoky Tequila from Maestro Dobel and a cocktail inspired by Día de Muertos.

Agave 101 is that mezcal is smoky while Tequila isn’t. Well, it’s time to tear up the rule book because Maestro Dobel has just launched Humito, a smoky spirit which the company claims is the “world’s first smoked silver Tequila.” We won’t get into an argument about who got there first only to say that there are other smoked Tequilas out there and, in the distant past, agave used in Tequila production would have been cooked over wood. Maestro Dobel won’t tell exactly how its process works, only to say that it involves: “a secret technique that harnesses mesquite wood”. And who doesn’t love a secret technique?

We tried it earlier this year at a special evening put on by Maestro Dobel. The brand is owned by the Beckmann family who also own Jose Cuervo, but Maestro Dobel is independent. Over the course of the evening we tried a number of Tequilas from the range: first the Diamante which is an aged blanco Tequila, the world’s first, apparently. This is like the white rum of the Tequila world, aged in oak and then filtered to remove colour. It’s a category that has inspired a certain amount of scepticism among Tequila fans. Why remove the colour? But it certainly tastes good, the ageing giving it a gentle creaminess without masking any of the fruity character. We also tried a very special Tequila called Maestro Dobel 50 1•9•6•7 Extra Añejo. It was created for the 50th birthday of Juan Domingo Beckmann (born in 1967) who started the Maestro Dobel brand. It’s a blend of five to seven-year-old spirits aged in a mixture of new American and French oak, blended and finished in sherry casks. There’s no filtering here. In its colour and flavour, it’s not unlike a very swanky rum. The price is pretty swanky too: it’s only available in a few select hotels where a measure will  cost you about £200!

Which makes the Humito at £43 sound like a terrific bargain. It’s a delicious drop too, lots of fruity aromatic agave character, very smooth, with the smoke present but sort of lingering in the background. Like a good drummer. We tried it in conjunction with food from top Brazilian chef Rafael Cagali from Da Terra in East London (who won a Michelin star earlier this year). 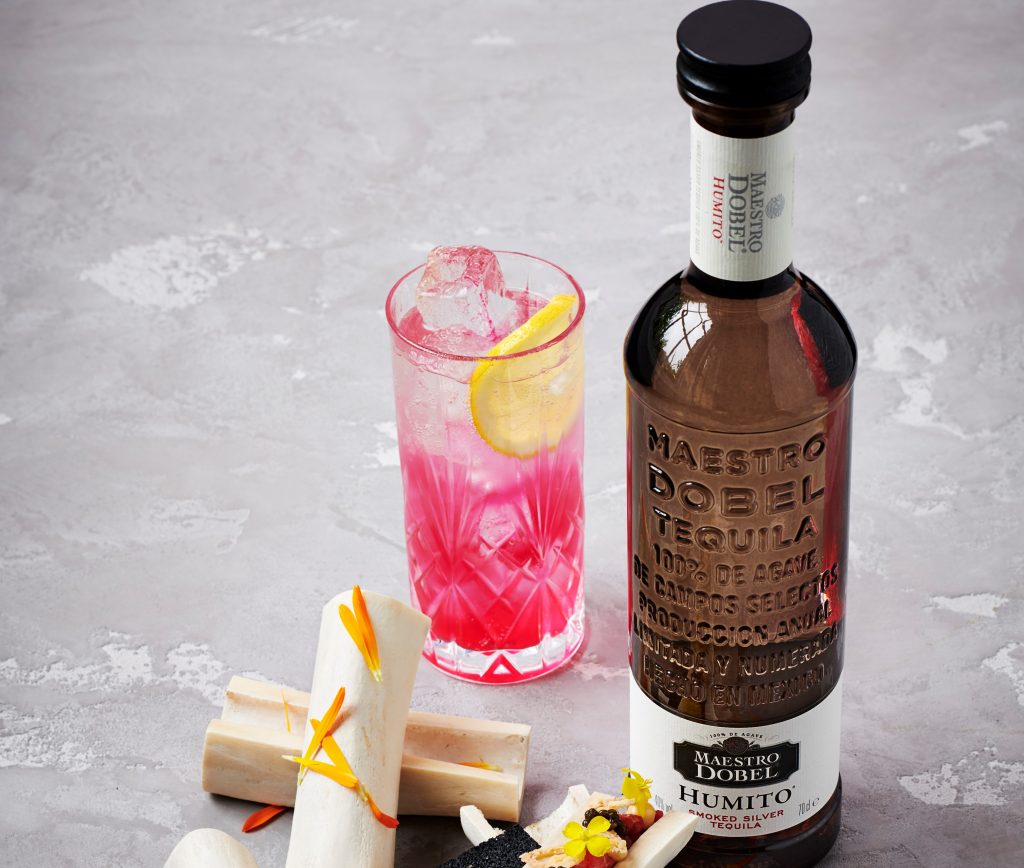 Humito is a great cocktail Tequila providing lots of character but it’s not overpowering like some mezcals can be. In fact, it’s rather like adding a teaspoon of mezcal to a Tequila cocktail. To tie in with Día de Muertos, which is turning into quite the international event, Maestro Dobel has come up with a suitably diabolical cocktail called the Red Devil which accentuates Humido’s subtle smokiness with hibiscus syrup. Rafael Cagali has even come up with some recipes to go with it including beef tartare and mackerel croquettes but we are sure it will go equally well with nachos.

Right, got your red horns on? It’s time to make a Red Devil:

Add first three ingredients into ice-filled highball glass and give it a good stir. Top up with soda water, stir again and pour on the hibiscus syrup. Garnish with a lemon wheel.