Cocktail of the Week: The Martiki

Henry Jeffreys
No Comments on Cocktail of the Week: The Martiki

Today we have something of a rarity for you. You won’t find it in just any bar. It combines two great cocktail traditions: classic American and tiki, all in one glass. Say hello to the Martiki!

The inspiration for this week’s cocktail came from a recent conversation with two drinks writers, Richard Godwin and Simon Difford. Over a few drinks, we discovered a shared love of kümmel, a kind of schnapps with a distinctive nutty sweet taste. We thought it would be fun to try to raise the profile of this delicious but rather forgotten liqueur. So, from now on the 17 April will henceforth be known as International Kümmel Day.

Godwin suggested I try it in the form of a cocktail called the Martiki. So, I dug out my battered copy of Godwin’s book The Spirits (a great one-stop place for all your cocktailing needs) and found the recipe. The Martiki is, as its name suggests, a tiki take on a Martini in which you use white rum instead of gin, and in place of vermouth, kümmel.

According to The Spirits, the cocktail was invented at The Luau restaurant in Beverly Hills. Now closed, the place was a celebrity hangout in the ‘50s and ‘60s, decorated in a tropical style, and featured an actual lagoon in the dining room. Bring back lagoons, I say. Much more fun than all this modern minimalism. Most recipes for the Martiki, however, don’t use kümmel. Some call for vermouth, and other versions are rather like Pineapple Martinis. According to Godwin, his recipe came from Jeff ‘Beachbum’ Berry. With a name like that, you’d expect him to know his tiki drinks.

The Combier Distillery where Mentzendorff kummel is made

Kümmel gets its peculiar taste from caraway seeds along with cumin, fennel and other spices. So it’s not dissimilar to Scandinavian Akvavit, though sweeter. The leading brand Mentzendorff was originally made by a Prussian family in Riga, Latvia. In the 1860s, the family came to Britain and branched out into wine importing. The firm is still going strong and is the UK agent for Bollinger Champagne. The liqueur is now distilled in France. The other brand you might see, Wolfschmidt, is Danish.

Despite its Baltic origins, kümmel used to be immensely popular among the British upper classes. There are mentions of it in Evelyn Waugh’s works. But the only places you will see kümmel drunk today are golf clubs and old-fashioned gentlemen’s clubs. Indeed, the last time I visited such an establishment to give a talk about my book, the man who had invited me insisted I join him for a glass of restorative kümmel afterwards. In short, kümmel could not be less fashionable, which means that it is ripe for a revival.

And so, on to Godwin’s Martiki. If you’re a kümmel novice, you might want to halve the amount you put in. Expressing a piece of lemon peel is essential as it freshens the whole thing up; you can either drop it in, or if you’re feeling properly tropical, garnish with a piece of coconut. You could even, as recommended in The Spirits, add a little coconut water to make it totally tiki. 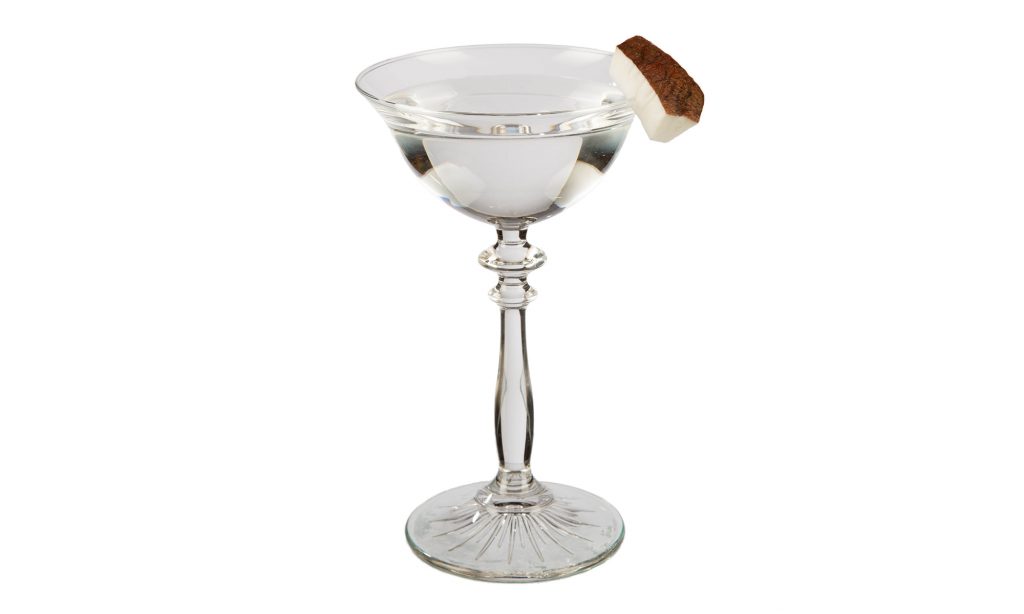 Here’s the Martiki, a strange mixture of classic and tropical, with a good dash of Baltic into the bargain. Perhaps it should be called the Cosmopolitan.

Stir ingredients in a shaker with lots of ice and strain into a cold Martini glass. Express a piece of lemon peel over the top, and garnish with a lemon twist or a slice of coconut.