Henry Jeffreys
No Comments on Cocktail of the Week: The Mango Mule

This week’s cocktail is a cold, fruity little number that highlights a very special Polish vodka made with old oak-aged fruit brandy.

Cast your mind back to the steamy days of late July. Temperatures in London were in the mid-30s but it was the humidity that was taking its toll on our spirits. It felt like monsoon season in the tropics. Fortunately, we found the answer, ice-cold cocktails courtesy of new vodka brand Kavka. While the air got thicker and the sky darker, we just sipped and chatted on the terrace at Ognisko restaurant in South Kensington.

The Polish Hearth Club (Ognisko Polskie), a grand stucco townhouse in Exhibition Row, has served as a home from home for London’s Polish community since 1939. During the Second World War, it housed the Polish government in exile. Jan Woroniecki, who has run the venue’s bar and restaurant since 2012, remembers the club’s heyday in the 1960s when the wartime generation were still in their prime. Woroniecki himself is an Anglo-Pole, his father was in the Polish army during the War and took part in the D Day landing. Following the Soviet occupation of his country, he decided to remain in London and married an Englishwoman.

According to Woroniecki, the club began to decline as that generation aged and their children weren’t so interested in looking after the place. The building, which must be worth a fortune, was nearly sold to property developers in 2012. When Woroniecki took over the bar and restaurant, he modernised the menu and decor (though there are still plenty of paintings of fierce-looking Polish heroes), and now, he told me, “the restaurant is generating lots of income, it’s financially very stable.” The place was certainly heaving when we were there.

Woroniecki originally worked as a photographer but moved into the restaurant business because, in his words, “it was just too much fun.”He’s the man behind Wodka (now closed) on Kensington High Street and Baltic (still thriving) in Borough. His latest venture is Kavka, a vodka brand which has just landed at Master of Malt. It came about following an investigation into how vodka was made in 19th century Poland. “Every distillery made a different spirit as a point of difference”, he told me, “I came across a method where you take rye and wheat spirit, and blend in small quantities of fruit spirits.” Jan Woroniecki discovered some 50 plus-year-old apple and plum pot still brandies in wooden barrels and adds a tiny amount, less than 1%, to column-distilled rye and wheat spirits. This then undergoes a very light filtration: “We can’t legally call ourselves a Polish vodka as we don’t know where fruit spirits came from,” he added. 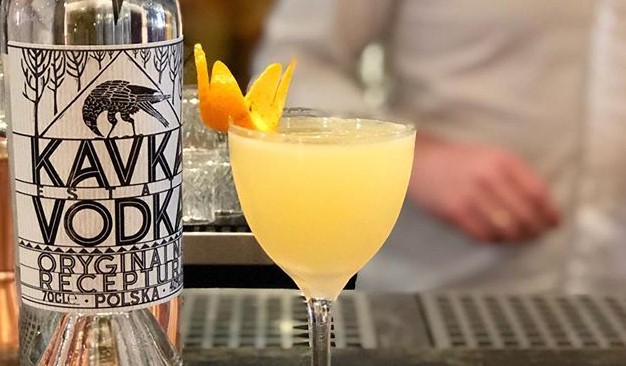 The taste is smooth, spicy and sweet, with a subtle fruitiness. Kavka makes about the best vodka Martini I’ve ever tried but the cocktail that really refreshed on that hot night in July was the Mango Mule. Mule cocktails are usually based on the Moscow Mule and the common ingredient are vodka, ginger beer and, usually, lime juice. They are then usually served in a copper mug. This one is nothing like that but it is delicious and in the end, that’s all that matters. We’re not going to quibble about a man’s mule. The subtle fruitiness of the vodka going beautifully with the mango sorbet and lemon juice with a little bit of Campari providing bitterness. The tropical weather might be a distant memory, but one sip of the Mango Mule and you’ll be transported to sweltering South Ken.

Shake the ingredients hard in a shaker and then strain into an ice-filled Nick and Nora glass. Garnish with a piece of orange peel.

A lesson in blended whiskey at London’s smallest Irish pub

The relationship between booze and brews