Henry Jeffreys
No Comments on Cocktail of the Week: Spiced Rum Coke Float

This week’s cocktail is a retro classic with a kick. We all remember the Coke Float from the ‘80s but what about a Coke Float with rum in it. Now you’re talking!

There are some drinks that have the time travelling powers. The very name can transport you into the past. One such is the Coke Float, just Coca-Cola over ice with a scoop of ice cream on the top. It was a staple of burger joints when I was growing up in the 1980s. Ordering one made you feel like you were in some optimistic American series, like Saved by the Bell. Putting ice cream on top of a carbonated drink goes back much further, however. According to trusted source Wikipedia it was invented in 1874 by Robert McCay Green, though it doesn’t seem inconceivable that someone had put ice cream in a fizzy drink before. It’s not rocket science.

All very nice and nostalgic, but we’re grown-ups now and so Tom G. Hurst from Rockstar Spirits had the brilliant idea of putting rum into this classic drink. Again, he might not be the first person to have done this, but still, what a great idea! And not just any rum but his Two Swallows Citrus and Salted Caramel bottle. This is made from high quality aged rum from the Diamond Distillery in Guyana – the people behind El Dorado. Then the team at Rockstar add natural ingredients to create a delicious, not too sweet flavoured rum. Hurst has worked hard on the profiles so that each rum works particularly well with Coca-Cola – as he told me: “80% of rum is drunk with Coke.”

Hurst’s background is in new product development. He worked at William Grant & Sons during an incredibly fertile period for the company when it launched Hendrick’s Gin, Sailor Jerry spiced rum and Monkey Shoulder blended whisky. All drinks that launched a thousand imitators. Hurst saw that rum was ripe from premiumisation and so in 2018 he set up Rockstar Spirits. Figures released last year by the WSTA support this with over 10 million bottles of flavoured rum sold 2018/19 and the market is growing rapidly. There are now nearly 200 brands on the British market, up from 50 in 2006. 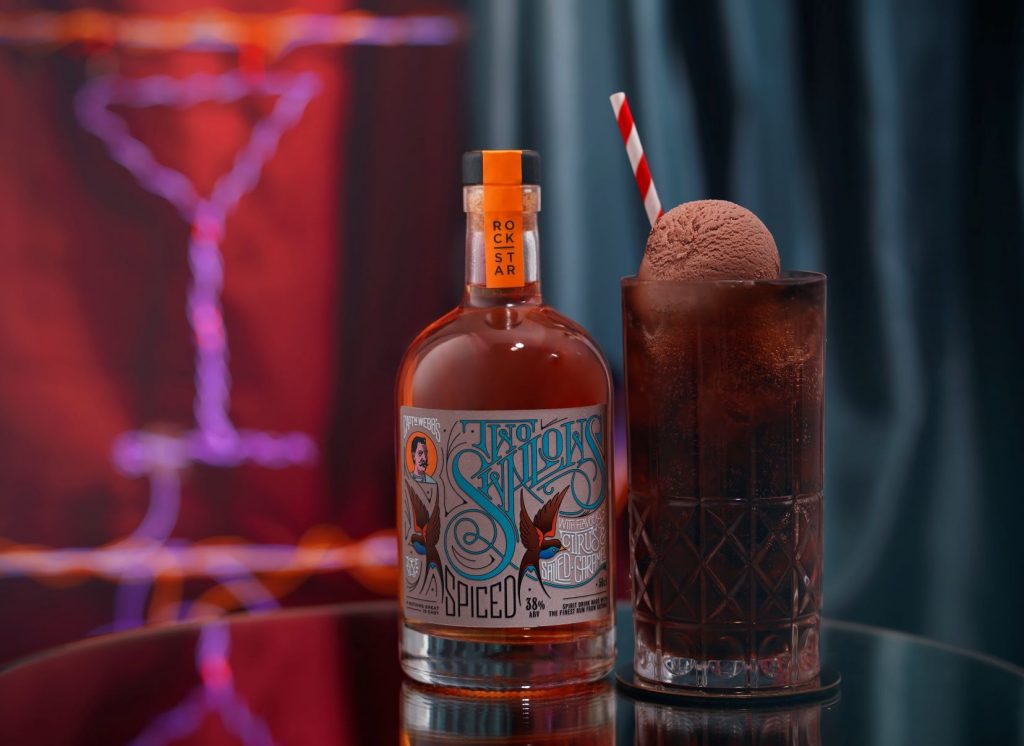 The main line from Rockstar spirits is Two Swallows, a range of flavoured rums made with high quality natural ingredients. The name comes from the classic naval tattoo, and inspired by Hurst’s great great uncle Captain Matthew Webb. Hurst described him as “a global icon. David Beckham of the Victorian era.” He was the first man to swim the English channel. Bryant & May put his face on its match boxes. He came to a tragic end, however. Hurst explained: “He loved the fame aspect and as that faded away, he kept on trying to do crazier and crazier stunts.” One included swimming the rapids at Niagara Falls where he drowned. The two swallows were supposed to carry drowning sailors to heaven.

So that’s the story behind Two Swallows. The brand has only been going a short time but things are going well despite the problems caused by lockdown. “Long term we are very much committed to the on-trade,” Hurst said. But the brand is going great guns through supermarkets and other retailers. It’s one of the bestselling rum brands at Master of Malt. “We launched three new products since the new lockdown to give people a point of difference,” he said. The combination of distinctive packaging and distinctive contents seems to work. Hurst explained the thinking behind the rums: “They had to tick three boxes: excellent standalone spirits, great with mixers, and interesting for bartenders to work with”. To achieve the latter, the rums are packed with subtle flavours which you might not notice on first taste, but can be pulled out with the right ingredients.

This might be the best Coke Float you’ve ever had. Here’s how to make it:

Serve in Highball glass over ice with a scoop of good quality chocolate ice cream.

The winner of a bundle of Cointreau booze is...