Henry Jeffreys
No Comments on Cocktail of the Week: The Corpse Reviver No.1

With the party season looming we thought it would be a good idea to look at a famous cocktail to take (in moderation, of course) the next day after a big night out. It’s the mighty Corpse Reviver No.1!

Even for drinkers as responsible and mindful as the Master of Malt editorial team, there are times when we might have one too many Brandy Alexanders of an evening. The next day, there’s the familiar dry mouth, headache and general sense of impending doom, though that might just be the forthcoming General Election. We all have our little rituals for such days: some swear by Alka Seltzer or breakfast at McDonald’s; for me nothing works better than ice cold full fat Coca-Cola. Annie Hayes wrote something recently on the industry devoted to curing one of mankind’s most perennial ailments.

Some hangover remedies, however, are a little more fiery. In PG Wodehouse the Inimitable Jeeves, Bertie Wooster’s butler comes up with a concoction consisting of a  raw egg, Worcestershire sauce, and red pepper. Jeeves describes it as “extremely invigorating after a late evening.” It’s what Americans would call a prairie oyster and the idea is, I think, that it’s so unpleasant that it distracts from the pain in the head. Bertie describes it as like “a bomb inside the old bean.”

Working on a similar principle is the hangover cure recommended by Fergus Henderson from St John restaurant in his book Nose to Tail Eating consisting of two parts Fernet Branca to one part créme de menthe drunk over ice. Which sounds like the kind of thing that will send you to an early grave.

The Corpse Reviver No 1. is an altogether more generous pick-me up. The recipe below is from Harry Craddock’s Savoy Cocktail Book (1930) where he writes: “To be taken before 11am, or whenever steam and energy are needed.” It is, however, a much older cocktail, dating back to foggy 19th century London where there were a whole variety of cocktails designed to get your day off to flying start with names like Gloom- Lifters, Eye-Openers, Smashers and Morning Jolts. There’s also a Corpse Reviver No. 2 for when the No. 1 doesn’t work which consists of gin, triple sec, sweet white vermouth, lemon juice and just a hint of absinthe; Craddock comments: “Four to these taken in swift succession will unrevive the corpse again”, so watch out! 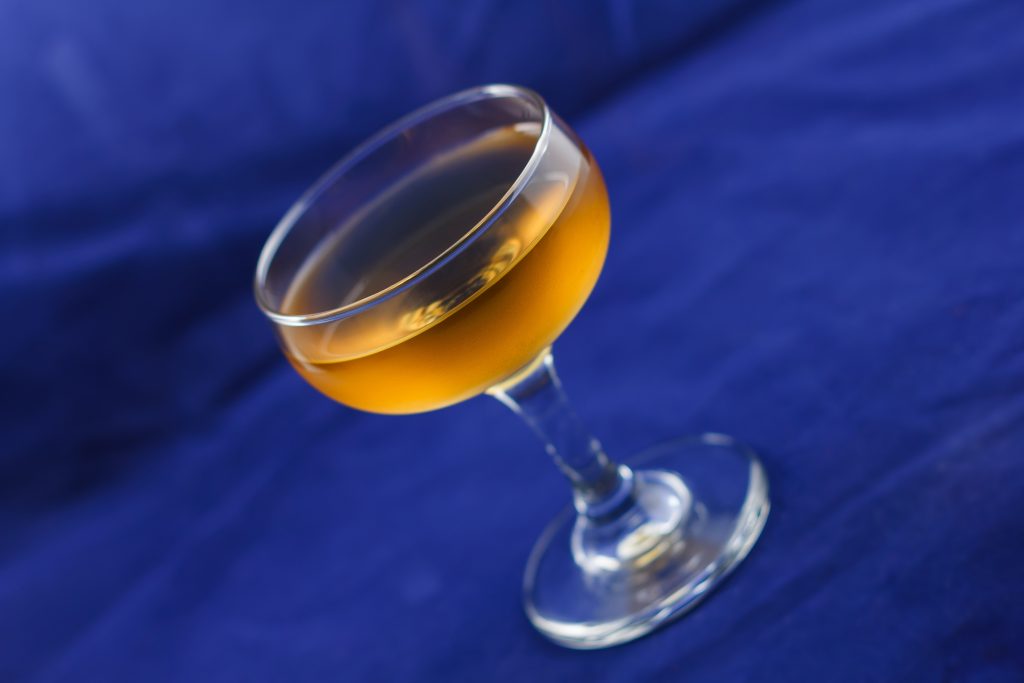 “Hope will dawn once more”

But back to No. 1, it’s not unlike a Manhattan but made with two sorts of brandy, Cognac and Calvados, instead of bourbon or rye. You might be drinking this at breakfast but don’t use cooking brandy. H by Hine VSOP is one of the best value Cognacs on the market, specifically designed for cocktails. For the Calvados, you could go for some funky farmhouse stuff but instead I’ve plumped for something smooth and fruity from Boulard. And to finish off your pick-me-up, Cocchi Storico Vermouth Di Torino is hard to beat.

In a shaker stir with lots of ice and strain into a chilled Coupette glass. Drink, and to paraphrase Bertie Wooster, hope will dawn once more.