Hold on to your tasting glasses: closed Scotch whisky distillery Brora is about to release something very special indeed. With just one year to go until its highly-anticipated revival, Brora 40-Year-Old celebrates 200 years of the Highland distillery – and it’s one to get whisky fans salivating.

The new expression is the first commercial release since Brora’s Special Releases 2017 appearance, and it’s also one of the distillery’s oldest. Drawn from 12 American oak hogsheads with liquid distilled in 1978, just 1,812 bottles will be available (a nod to the year the distillery was founded). And expect the 49.2% ABV whisky to be fairly heavily peated, too.

“Of all the stories of Brora, there is one that seemed particularly fitting to tell on its 200th Anniversary,” said Diageo master blender, Dr Craig Wilson. “From 1969-83, there was a new experimentation phase in production and the Brora distillers created a smoky malt used heavily-peated Northern Highland barley. Used primarily in blends at the time, the few casks that are left from this Age of Peat, matured remarkably well and what remains is a multi-layered and complex single malt of astonishing quality.”

It all came about by working closely with the Diageo Archive team, who helped Wilson identify when the smoky Brora style was at its peak. The archivists discovered original production records during the distillery’s restoration work. “Little did the craftsmen at the time know, they had created a masterpiece,” he continued. “It is emblematic of the varied past of the distillery that makes it so special to all that know it: a humble story of experimentation, craft and happy coincidence.” 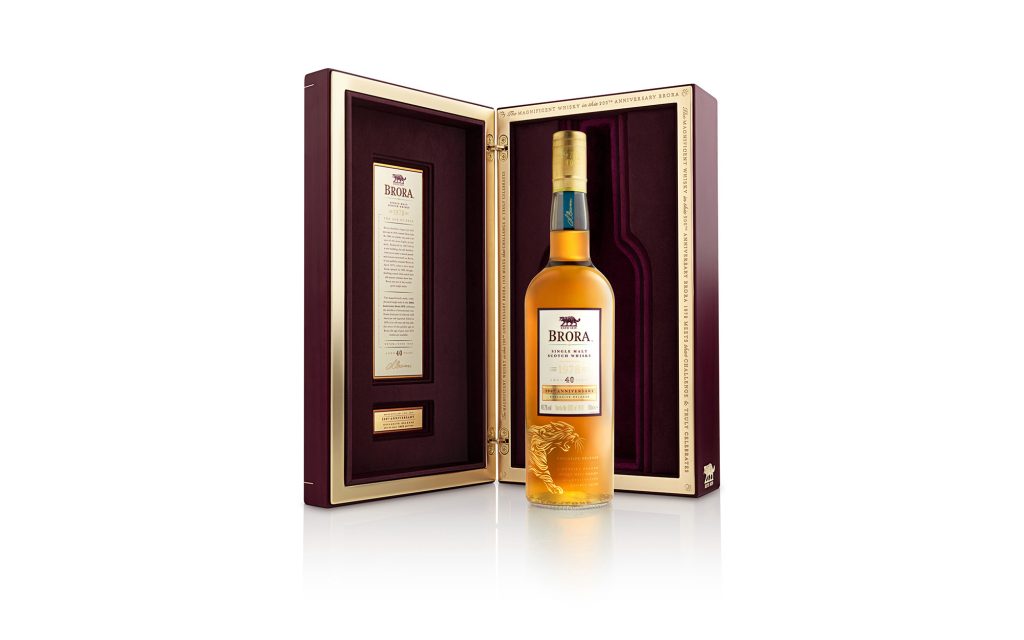 The celebratory bottling is one the oldest ever released by Brora

What does it taste like? According to Diageo, expect a whisky clear amber in appearance, with long, fine beading. On the nose, there’s sweet, smoky peat wafts, treacle toffee, ripe figs, raisings, and with water, sacking and tweet notes come through. On the palate, there’s a waxy texture with sweet and savoury smoke, dates, white pepper, and a minty note with a dash of water. The finish? “Long, rich, and sweetly warming”.

Brora 40-Year-Old: 200th Anniversary Limited Edition will retail at £4,500 – click right here to see it in all its glory!