The whole fruit and nothing but the fruit

Fruit brandies are big on the continent but unknown in Britain. Almost unknown, that is. There is one man distilling eau-de-vies in tiny quantities using local fruit and an obsessive attention to detail. Ian Buxton travelled to the Cotswolds to meet him.

Where do your literary sensibilities lie? Do you prefer Henry James or Marcel Proust to Ian Fleming and Wilbur Smith? Or for an agreeable foreign break, would you choose a cultural tour of little-known Greco-Roman remains over Club 18-30? Nothing wrong with either I should add, but you do need to know what you like. You may, for example, really enjoy very robust Islay single malts or monstrous roaring sherry-soaked whiskies. That’s fine, but if so I’d suggest that you look away now because I doubt that the English fruit brandies (or eaux-de-vie) of the Capreolus Distillery will really float your boat.

Everything here is about subtlety, refinement, delicacy and precision. These are very cerebral spirits, not for quaffing with roguish abandon but to be savoured, thought about and analysed. These, I would submit, should be drunk with at least some appreciation and regard for the precision that has gone into making them. 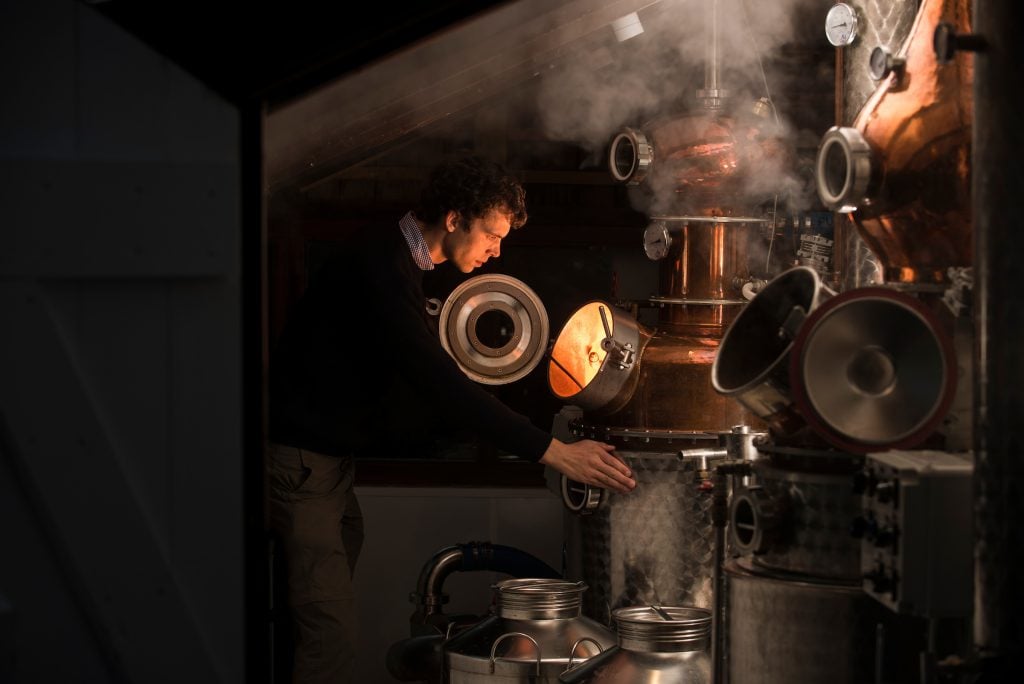 But who or what is the Capreolus Distillery, I hear you ask. At one level, it’s another of the many tiny craft distilleries we’ve seen spring up over recent years. This one is based in a converted Cotswolds greenhouse, with a garage serving as warehouse and dry goods store.  Two small Czech stills are the engine at its heart and self-taught distiller (and professional photographer, see photos in the article) Barney Wilczak presides over the operation. A highly-regarded gin first drew the world’s attention.

So far, so unexceptional: well-rated gin from a start-up distillery is praiseworthy (and the gin is very, very delicious) but not all that unusual. What really makes Capreolus stand out are the fruit brandies. Eaux-de-vies are not an English tradition. With the exception of cider and, less often perry, fruit has conventionally been used in England for preserves and desserts whereas in much of continental Europe small-scale, artisanal distilling is well established. Indeed, such is its importance that in France, Germany, Hungary and Italy among other nations it’s considered part of their cultural patrimony, enjoys an honoured place in the drinking repertoire and is an essential component in gastronomy. Oh, and upstart outsiders are looked at sceptically. 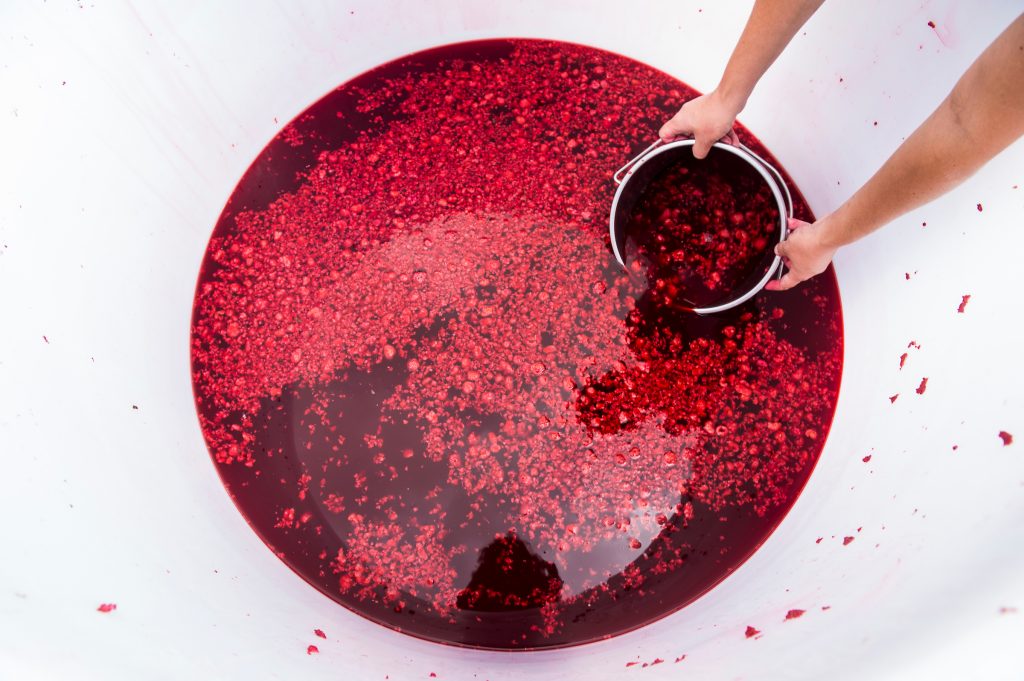 Fermented raspberries being transferred to still by hand

In working with locally-grown English apples, pears, quince, plums, damsons, greengages, blackcurrants, raspberries and other fruits, Wilczak has taken on a considerable challenge.  Not only are the products a minority taste in the UK, his meticulous approach means they are incredibly demanding and expensive to produce. His pursuit of absolute purity of taste borders on the obsessive: only the finest fruit is selected, no sugar is added and only wild yeasts employed in fermentation. Very considerable quantities of fruit are required to produce even a single litre of distillate.

Just imagine examining 34.5 kilos of raspberries by hand. Each single berry is inspected, damaged berries or leaves removed and prior to fermentation the fruit is washed by hand.  When bottled at 43% ABV, Wilczak estimates that there’s the equivalent of one kilo of raspberries in each 25cl measure or, as he puts it, “100,000 pips in every glass”.

Even using a 37.5cl bottle as standard, this painstaking approach means that quantities are very limited: in 2018 there were a mere 93 bottles of the Raspberry Eaux-de-Vie and despite a price tag of £120 they were soon all gone. Other expressions are similarly restricted: 106 bottles of Damson, 142 of Greengage, and 194 from the Quince, every single one of which was picked by hand, then individually washed to remove any trace of a fine fluff that becomes rancid after distillation. 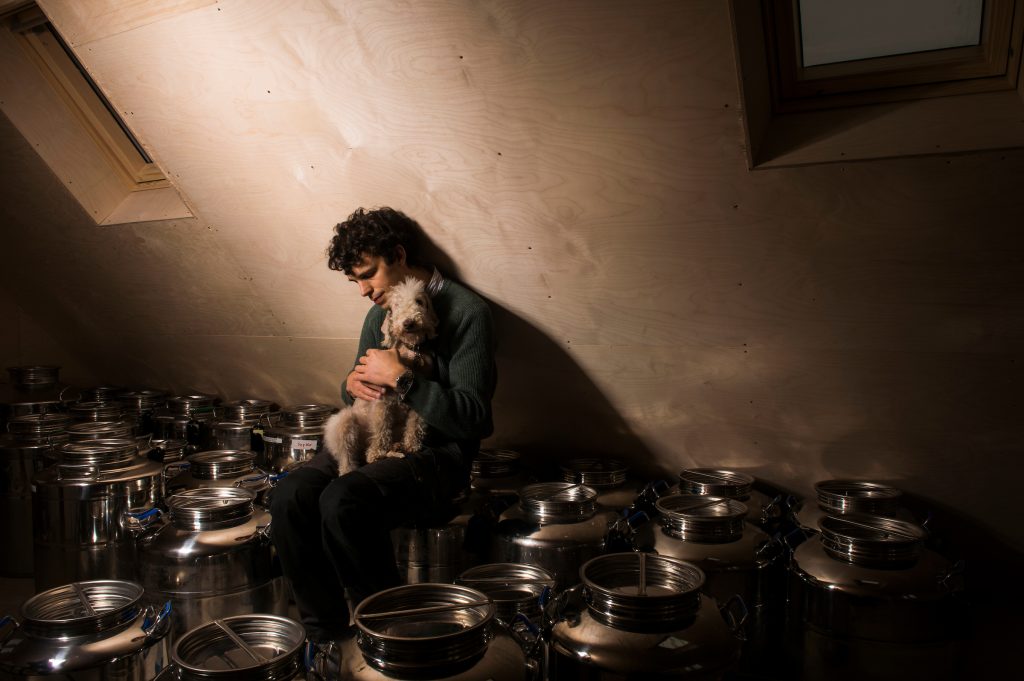 The results are remarkable, with an intensity and delicacy that is hard to convey on paper.  What Wilczak is doing seems closer to perfumery than distillation as we understand or usually experience it. The natural home of these products would be a Michelin-starred restaurant where they can be served with due ceremony and appreciation as the culmination of an exceptional gastronomic experience. I should add that a little goes a long way, but that these are a quite exquisite expression of the transcendental power of distillation to preserve the essence of the base ingredient whilst magically transforming our understanding of the fruit to a profound new level.

That may be a candidate for Pseuds Corner but, if you had tried any of these products you’d understand. Here’s a tip: start with the Garden Swift Gin. Not only is it less expensive, it’s the ideal pathway to understanding what has been achieved here. Personally, I’m happy to sip it neat, very slowly, and restrict myself to a single, small glass (not a sentence I write all that often).

Click here for the Capreolus range available from Master of Malt.