The final spot is here! For the first time since the 1960s, there are four colours in the ‘Spot’ range of single pot still Irish whiskey with the arrival of the Madeira-aged cask strength Blue Spot. We spoke to people behind its rebirth and, most importantly, had a little taste.

In November 2018, we visited Dublin for the relaunch of Red Spot single pot still Irish whiskey and while we were there, Kevin O’ Gorman from the Midleton Distillery hinted heavily that the team were working on the release of the final spot in the range, Blue. Well, now the wait is over.

But before we dive in, first a bit of recap. The Spot range of whiskeys, of which Green Spot is the best known, are a relic of the old days when the big distillers didn’t bottle their own whiskey. Instead, merchants all over the country would buy and age new make spirit and sell it under their own brands. One such was Mitchell & Sons wine merchants in Dublin. They began buying spirit from John Jameson and Sons distillery on Bow Street in 1887 and filling it into empty wine casks, mainly sherry, Port, Malaga, Madeira and Marsala. 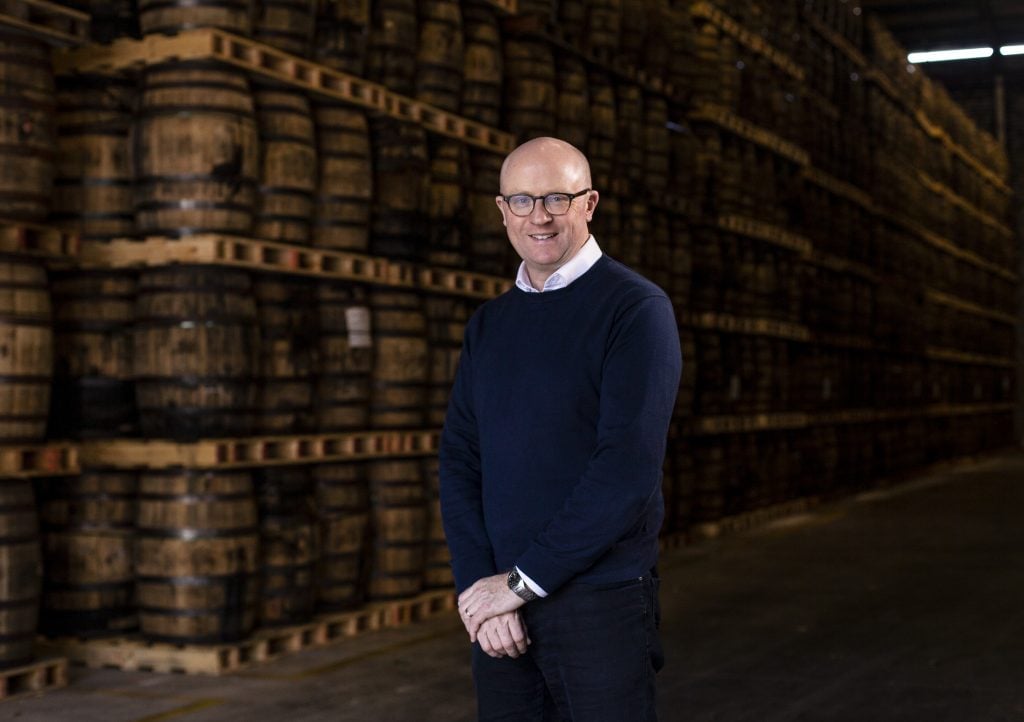 These casks would mature in the firm’s Fitzwilliam Lane cellars and then daubed with a spot depending on its ageing potential with red being the highest designation. At one point the firm sold four designations: Blue, a seven year old, Green, a ten, yellow, 12 and red, 15 year old. Gradually, however, the mighty Irish whiskey industry contracted and independent bottling died out. Green Spot survived, now made at the New Midleton distillery in Cork, but the other Spots were discontinued in the early 1960s.

At one time, Green Spot was the only single pot still whiskey available. It was hard to get hold of and often a welcome present for Irishmen living abroad. Peter Dunne from Mitchell & Sons told a story about two men coming into the shop and buying six bottles. He’d never sold so many before and was curious about who they were for. Apparently, these men were friends of Samuel Beckett on their way to visit him in Paris.

Now, of course, things are very different, the style is revered and Green Spot is available globally.  Now an NAS expression, it contains whiskeys between seven and ten years old. Yellow Spot was reintroduced in 2012 as a 12 year old whiskey aged in sweet Malaga casks followed in 2018 by a 15 year old Red Spot aged first in bourbon and then Marsala casks. Now the final piece in the jigsaw is here. Sadly we weren’t able to travel to Dublin this time but instead did a Soom tasting with Katherine Condon and Kevin O’ Gorman from Irish Distillers, Jonathan and Robert Mitchell from Mitchell & Sons, and Humberto Jardin from Henriques & Henriques in Madeira.

This relaunched version is aged in bourbon and sherry casks like Green Spot, but adds Madeira, a wine which would have been imported by Mitchell & Sons. According to O’ Gorman, they didn’t really know what the original Blue Spot tasted like beyond that it was seven years old and had some Madeira influence, nobody has seen a bottle for years. 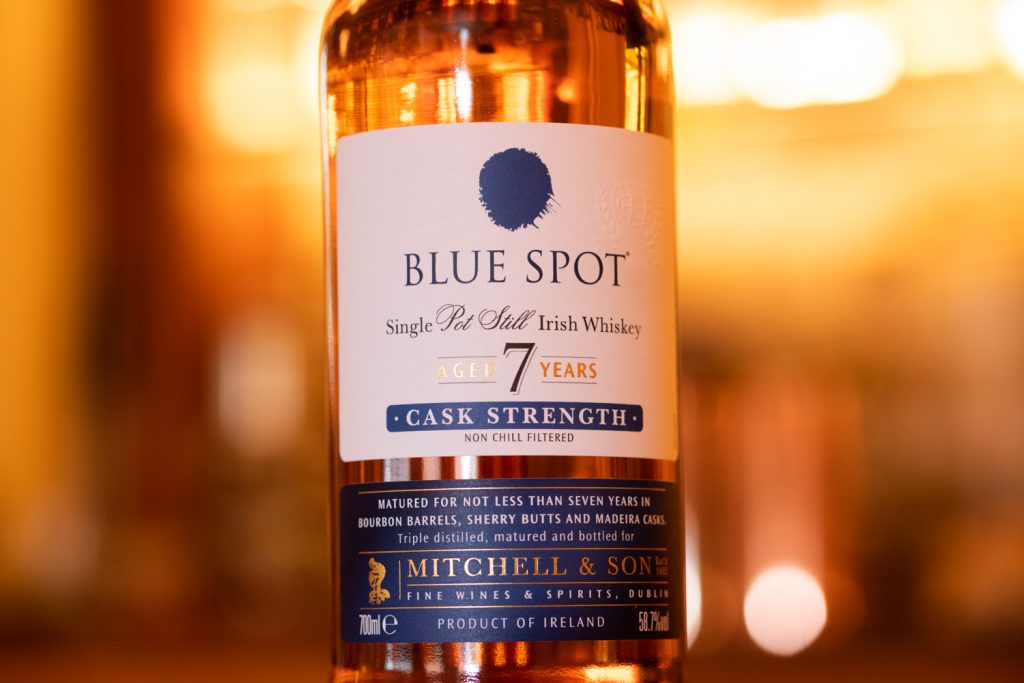 Jonathan Mitchell explained: “The inclusion of whiskey aged in Madeira casks adds flavours that would have been originally introduced into Irish whiskey by the Mitchell family. As the full Spot range comes back to life, we find ourselves bursting with pride for the role our family played in the creation of this treasured range of whiskeys.” These casks were coopered in northern Portugal before being sent to the island of Madeira for seasoning in Tinta Negra, a full-bodied medium sweet wine, for three years before they’re ready to be sent to Ireland to be filled with medium style pot still spirit.

It’s a seven year old whiskey but according to master distiller Kevin O’ Gorman, it contains much older Madeira cask whisky including some barrels that were filled when he first joined the company. He commented: “It is with absolute pleasure that we reintroduce Blue Spot and bring a piece of Dublin’s rich whiskey history back to life. Over the years I have had the honour of collaborating with the Mitchell family, who for generations have celebrated the influence of fine wines on Irish whiskey, as we have reintroduced expressions to the beloved Spot range. I am incredibly proud to celebrate with Jonathan and Robert Mitchell on this historic day as Blue Spot takes its place alongside Green, Yellow and Red Spot, reuniting the whole family once again.”

This reborn version is non-chill filtered and bottled at cask strength in batches so the alcohol will vary. Our sample was 58.7% ABV. There’s a full tasting note below but it really rounds off the spot range: the Green being all about that fresh green apple note, the Yellow honey, peaches and creme brulee while the Red Spot majors on dried fruit, rum and nuts; the Blue, in contrast, is bigger, burlier and spicier but with no shortage of elegance. Those Madeira casks provide nuttiness and the alcohol comes through more as flavour than heat, making it dangerously drinkable for such a strong whisky. According to O’ Gorman, it just tasted so right at cask strength that he thought there was no point adjusting it. We have to agree.

Nose: Big hit of spices on the nose, ginger, nutmeg and cinnamon, followed by a medley of puddings: banana custard, apple pie, and frangipane tart.

Finish: There’s a milk chocolate creaminess that goes on and on with fresh fruit and nuts lingering, and just a lick of rum at the end.

You can buy Blue Spot from Master of Malt now!

Master of Malt @MasterOfMalt
9 hours ago
A recent tasting of @DrinkFiveFarms Irish Cream Liqueur got us thinking about the way the Irish cream liqueur is changing and growing, and why that’s a good thing.

Master of Malt @MasterOfMalt
14 hours ago
Copper Dog is brimming with honeyed fruit and biscuity malt character. A splendid blended Scotch if ever we saw one – and the brand supports animal shelters! Perfect for #WhiskyWednesday!

Win big with our #MissedMoment competition!