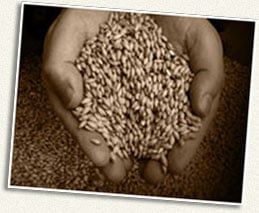 A handful of malt

The term ‘whisky‘ derives from the Gaelic usquebaugh – itself from the Scottish Gaelic uisge beatha, or the Irish Gaelic spelling uisce beatha. Uisce comes from the Old Irish for ‘water’ and beatha from bethad, meaning ‘of life’. With this in mind, whisky is etymologically linked with a great number of spirits, all of which refer to the origins of the spirit – the quest for the elixir of life.

A still at Penderyn

Distillation is often attributed to the Arabs, who invented pure distillation during the 8th century. There has been distillation on the Indian subcontinent since 500 BC, but the Arab and Persian chemists advanced it using a number of apparatus and techniques similar to those of today. They are to be credited with the term alcohol, which first appeared in English in the 16th century. It was from the medical Latin and before that the Arabic al-kuhl – ‘al’ being the definitive article (‘the’) and ‘kohl’ being a powdered form of eyeliner, originally used as a preventative against what ailed the eye. It was produced by drying sandalwood paste, of the juice of Alstonia scholaris (Indian devilwood), which is dried and left to burn over a lamp. Etymologically, Kuhl dates back further still, from ‘kahala’ meaning to stain or paint.

Charring the casks at Mackmyra

The modern definition for alcohol was first recorded in 1753, with the definition ‘intoxicating ingredient in strong liquor’. The water of life is a term applied to other spirits, aquavit, for example, from the Latin aqua vitae (water of life) and the grand French spirits: Cognac, Armagnac and Calvados, all of which are eaux-de-vie (no definition necessary). The Latin aqua vitae has been used in reference to distilled beverages since the early 1300s.

Gaelic whisky was first documented in 1405 in the Irish Annals of Clonmacnoise, a lost Irish chronicle translated in the early 17th century. Herein there is a written record of the death of chieftain, at Christmas time, after “taking a surfeit of aqua vitae”. Scotland has its first record of the water of life in 1494 in the form of an entry in the Exchequer Rolls where the malt was sent “to Friar John Cor, by order of the king, to make aquavitae”. Usquebaurgh became whisky during the 12th Century, during an invasion of Ireland when King Henry II’s soldiers bastardized the term. 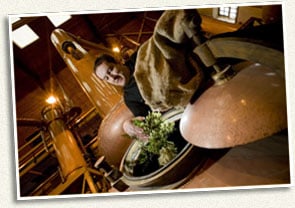 The spelling of whisky, or whiskey, differs geographically. As a rule, American and Irish prefer ‘whiskey’ and the Scots, Canadians and the rest of the world’s single malt makers prefer ‘whisky’. This originated during the 19th century. For in around 1870, Scotch whisky was of very low quality, much of it being distilled poorly in Coffey stills. For exportation to America, the Irish distillers wanted to differentiate their product from the poorer Scotch whisky, thus they added the ‘e’ to mark the crucial distinction. Today, Scotch whisky has become one of the world’s greatest spirits, but the spelling still differs. En mass, Americans still spell their spirit with an ‘e’, though legally it is spelt ‘whisky’. A few distillers, Maker’s Mark and George Dickel for example, prefer the Scottish spelling, this is to be attributed to their Scottish ancestry.

So whether you’re looking for a bottle of the good stuff online (we hear there’s a particularly good award-winning retailer who can help you that), writing your own reviews or you can see the words “whiskey whiskey” flash across your brain as your Friday shift slowly draws to a close, you can feel confident knowing when it is appropriate to drop or add that all important ‘e’.