Ben Ellefsen
1 Comment on World Whiskies Awards (6 of them. Yes. 6) 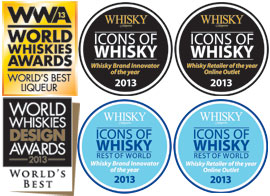 Hot on the heels of our success at the Off License News Drinks Retailing Awards, the World Whiskies Awards 2013 were presented last week at the Waldorf Hotel in London, and, erm, we cleaned up again*.

I’m not going to re-hash the recent blog post I wrote about our success at the OLN awards, but suffice it to say, there’s a reasonable-length post here about the innovations and initiatives we’ve launched in the past 12 months. It’s well worth a read if you’ve not already.

Our first award of the evening was Online Whisky Retailer of the Year (Rest of World) – an award for the online retailer outside of Scotland who’d done the best job of selling things over the interwebs in the last 12 months. The other contenders in the category were; The Whisky Exchange, The Whisky Shop, La Maison du Whisky, Dan Murphy’s, Jeroboams, Kawachiya, Pure Spirit Drinks, and Whisky Galore.

Scotland had already been judged for this category, with Loch Fyne Whiskies coming out as Scotland’s best online retailer, leading on to…

The next award of the evening – The World’s Best Online Retailer. This was perhaps the most important award of the night, as, well, it’s our core business. We were delighted to have been recognised by the world’s leading whisky publication for the second year in a row. We were delighted too that Joel, from off of caskstrength.net (Joel and Neil were hosting the evening together with Rob Allanson, editor of Whisky Magazine) was wearing tapestry shoes. Just not as delighted. 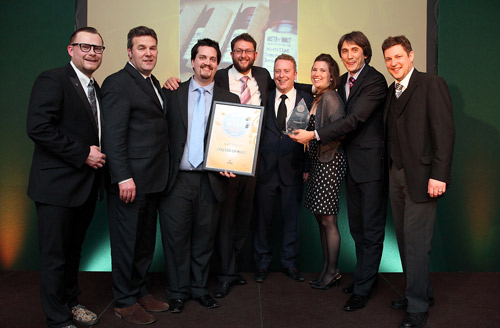 After this came an award which we genuinely weren’t prepared for. It’s no secret that here at MoM that we like a bit of boundary-pushing. A spot of Innovation.

What we categorically weren’t expecting though was to be nominated, and to win, both awards (Rest of World, and Global) of the Whisky Brand Innovator of the Year Category. 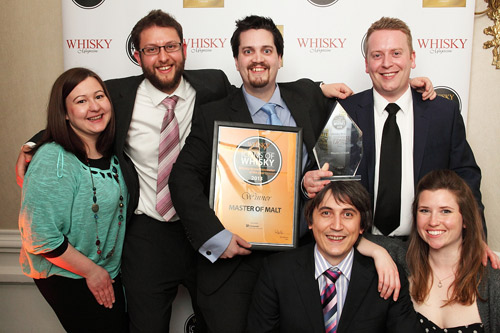 Note to self – look less manic in photos

To even be mentioned in the same sentence as the first two of these (both of whom are international giants) is immensely humbling, but to win was really quite something. We were gobsmacked.

The Fifth Award of the evening took the form of the ‘New Range’ award within the World Whiskies Design Awards. This one was less of a surprise (though still tremendously welcome given the competition), given the immense, immense success of the project. 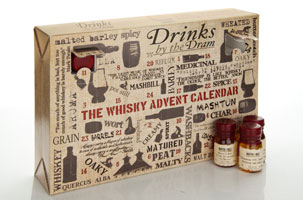 The final award of the night was more of a grass-roots affair, although arguably the highest profile award of the night. The trophy was also the only one I could be confident of killing more than one person at a time with. Just look at it.

This has the supremely important quality of being the only award that we have achieved so far from Whisky Magazine for *liquid*, as opposed to ‘doing things’. 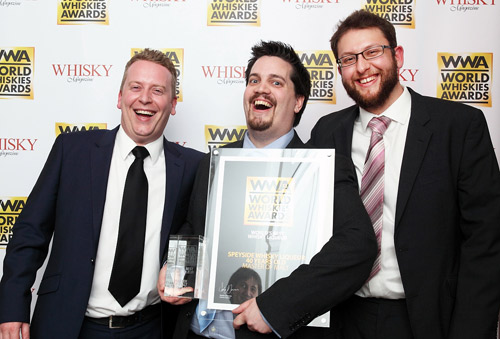 I’ve genuinely no idea what was so funny.

Whilst it feels like this astonishing liqueur has been part of our portfolio forever, the fact of the matter is that this is the first year that we’ve been able to enter, due to the launch date, and entry deadlines for the awards.

In view of this win, I think we’re probably going to do another blog post discussing it in the near future – look out for this…

So – another year, another clutch of awards. As ever, we categorically couldn’t have done this without you lot – our customers. Thank you, and watch this space. We’ve got *a lot* more coming this year, and a lot of it is centered around whisky.

To finish with – here’s a group shot of all the winners from the evening. Lots of familiar faces:

*cleaned up or made the entire evening significantly more messy. Depends on perspective.

The Ship Hits the Fans…Caskstrength launches a Cutty Sark!