The myths and marvels of the Prairie Oyster

Hangover remedy, cocktail, or both, the famous egg yolk-based concoction was once the go-to for the enthusiastic drinker. Millie Milliken looks into the history of the Prairie Oyster and asks why we don’t drink/ eat more of them.

“There wasn’t a week went by but that on at least one day I couldn’t eat anything for breakfast but a couple of aspirins and a prairie oyster.” The words of Ian Fleming’s James Bond in his 1961 novel Thunderball. No doubt silly, suave James had had one too many vodka Martinis the night before and was indulging in the infamous hangover cure, the Prairie Oyster (not to be confused with Rocky Mountain Oysters – I’ll let you Google that one).

When you’ve had an oeuf

In its simplest state, the Prairie Oyster combines a raw egg yolk, Worcestershire sauce, hot sauce/vinegar and salt and pepper. The origins of this peculiar remedy are mysterious, although most think it had its origins in the Wild West during the 19th century.  Since then, the down-in-one hangover remedy has featured in countless books, films and TV shows (P.G.Wodehouse’s short story Jeeves Takes Charge, Cabaret, Pillow Talk and – my favourite – Addams Family Values) as a way of nursing the effects of a night on the sauce.

I was introduced to the peculiar joys of the Prairie Oyster after a recent Tasting Online cocktail masterclass, led by bar industry pro and once head of London Academy of Bartenders , Shiv Lal. We had just used egg whites to make a Ramos Gin Fizz and so had yolks left over.

“My first Prairie Oyster was given to me in the first bar I worked in by a senior member of staff. We used fresh egg white for our sour cocktails, so having leftover egg yolk was best consumed rather than binned,” he explained. And so down the hatch it was and I have to say that it worked wonders on my rather fragile constitution.

What do the eggsperts think?

Some experts, however, have poo-pooed its revelatory effect on a stinking hangover. In a 2015 BBC Future article, head of Keele University’s Alcohol Research Group, Richard Stephens accredited its apparent easing of the fuzzies to the distracting “unusual and piquant” flavours of its ingredients.

But what about the yolk? According to Healthline, the fact that eggs are rich in cysteine (an amino acid that your body uses to produce the antioxidant glutathione) is its secret hangover-busting weapon. “Drinking alcohol decreases the body’s stores of glutathione. Without it, your body has a hard time breaking down the toxic by-products of alcohol metabolism. Eating cysteine-rich eggs is a great way to increase glutathione in your body and possibly improve hangover symptoms.”

The Prairie Oyster, however, isn’t always as virtuous. The addition of alcohol to the mix brings with it an alternative name (Amber Moon), more flavour nuance, a greater appreciation of its peculiarity and the opportunity to elevate it from hangover cure, to hair of the dog and beyond. “I find this cocktail to be quite rare in terms of offerings in cocktail bars,” says Lal, “however you might get lucky if the bartender is willing to make you one having the ingredients to hand.”

If you are lucky, the addition of tomato juice (and almost a riff on a Bloody Mary or a Red Snapper) is a common theme. Lal makes the Bloody Mary comparison too: ‘It’s not too dissimilar to a Bloody Mary which has a mix of savoury, umami and tart flavours, [and is also] often used as a hangover cure.’ 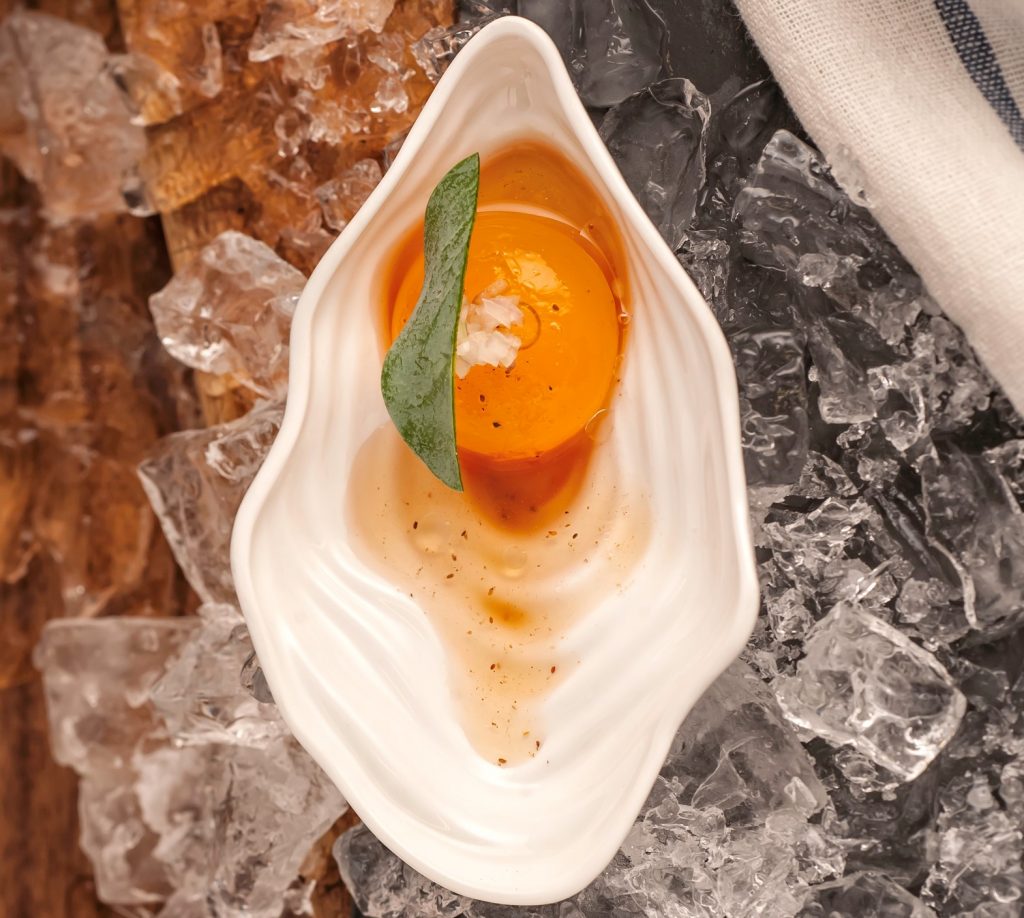 Star bartender Erik Lorincz (now owner of Kwant) created a Prairie Oyster during his tenure at The Savoy’s award-winning American Bar. It combined 40ml of gin infused with herbs of Provence, 5ml house Bloody Mary mix, a mini jar of tomato ketchup (30ml), 5ml of softer vinegar such as balsamic, a pinch salt, a pinch pepper, all stirred together at room temperature and poured into a coupe. Then, the egg yolk was carefully dropped in.

Other alcoholic renditions include that from Black Cow Vodka using 25ml Black Cow, two dashes of Worcestershire sauce, three dashes of Sriracha sauce, a sliver of slightly melted salted butter and on free range egg yolk served in an eggshell. Over in Islington, 69 Colebrooke Row’s signature serve incorporates tomato yolk, horseradish vodka, Oloroso sherry, shallots, pepper sauce, celery salt and an oyster leaf. It’s tomato yolk replaces that of the egg, using clarified tomato juice, dyed orange, frozen- and dipped in vege-gel. When it’s time to serve (in an oyster shell) it will be solid on the outside and liquid on the inside. The original recipe (from 2007) even included shochu rather than vodka for that extra hit of umami.

Lal suggests adding anything from gin to sherry, vermouth, brandy and Cognac. Personally, I’m partial to the latter, namely a Frapin 1270 for its creamy vanilla, white pepper and tobacco notes, or Remy Martin 1738 if you fancy something a little fruitier. I wouldn’t uncork the special bottles you’ve saved for when the Queen visits though – the folks at Hermitage might not be impressed with you downing a shot of its 1893 Paradis with an egg yolk sitting in it