This week’s hot new arrival is a very special spirit from Haiti. Not only is it superb and distinctive but 100% of the profits from sales of Saint Benevolence Rum Clairin go to helping the Haitian people.

If you want to taste a spirit that reflects its place of origin, nothing beats clairin. It’s a kind of Haitian rum made from pure sugar cane juice rather than molasses, like a rhum agricole.

Until very recently, clairin was only available to intrepid visitors to Haiti but now there are two companies bottling this distinctive spirit for export (there’s also Boukman botanical rum). One is La Maison & Velier, a collaboration between La Maison du Whisky and Italian rum specialists, Velier. The other is a father and son operation called Saint Benevolence run by Chase and Calvin Babcock.

Chase Babcock told me that his father Calvin became interested in Haiti after doing some building work there in the 1970s. He is from Miami so the island republic was just a short plane ride away, but a totally different world. It’s a desperately poor country. 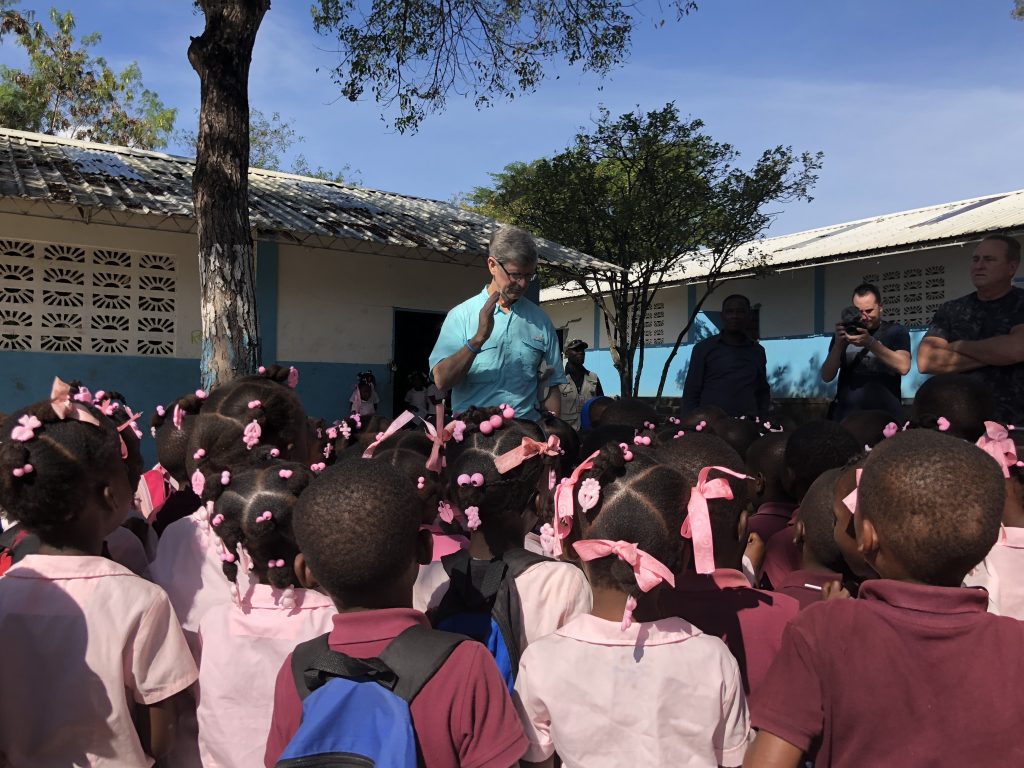 Calvin Babcock at a school in Saint Michel

Haiti shares the island of Hispaniola with the Dominican Republic. It was a French sugar plantation worked by African slaves. According to Babcock, at one time half of the world’s sugar came from this island. In 1791, inspired, somewhat ironically, by the ideals of the French revolution, slaves led by Toussaint Louverture overthrew the French and established a republic. The only successful slave revolt of the modern era.

Since then, the country’s history has not been a happy one: a catalogue of coups, invasions by colonial powers and misrule. Most notoriously in the ‘60s and ‘70s the country was governed by a bizarre dictator Papa Doc Duvalier and later by his son, known as Baby Doc.

At times, the island’s beauty and closeness to America has made it a tourist destination. During a brief period in the ‘60s, it became a playground for the rich and famous. But more recently, Haiti has suffered from natural disasters like the devastating earthquake of 2010.

Founding a school in St. Michel

Following his first trip there, Babcock became a regular visitor to Haiti. In the late ‘90s, Babcock senior met a Haitian native living in Miami called Gueillant Dorcinvil who urged Babcock to get fully involved in helping the people of Haiti. In 2002, this led to the foundation of a school in the town of Saint Michel, “built on land donated by Guillant’s family and that’s how they got started,” Chase said, when I spoke to him over Zoom this week.

He went on to say: “I inherited passion and responsibility for the town”, and wanted to start a business that would help the community of Saint Michel. Initially, he thought of coffee but the quality wasn’t there, “but they were making this beautiful clairin. Dorcinvil’s family had been growing sugar cane for three generations, and distilling it to the family still. I realised the moonshine they were making was a complex agricultural product,” he said. 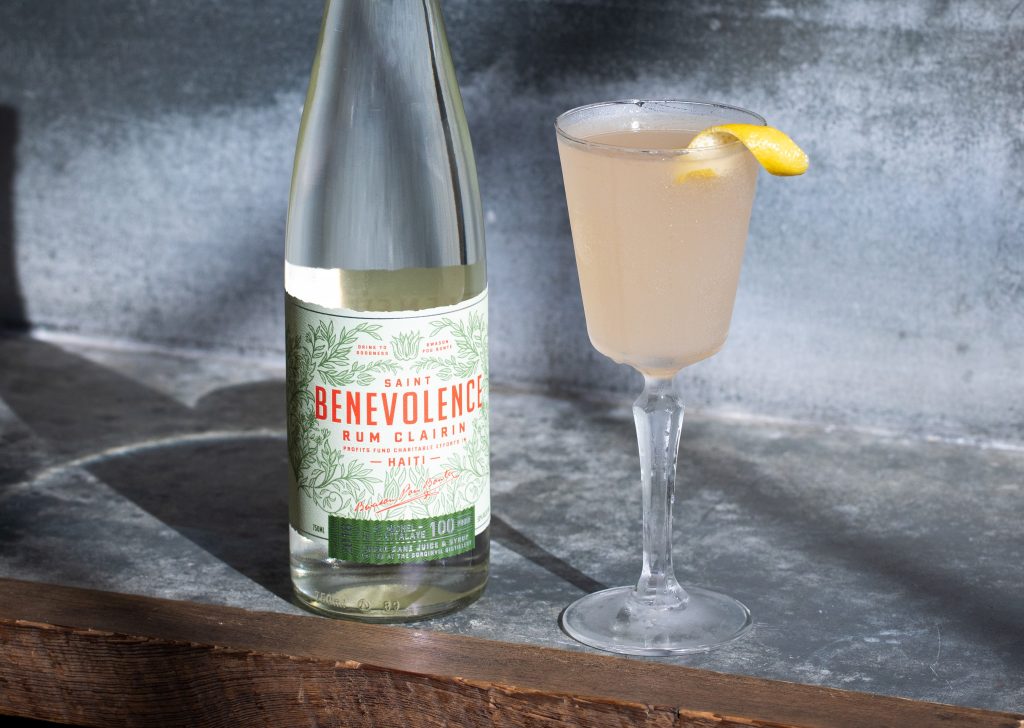 Clairin is made using techniques and raw materials that haven’t changed much since the revolution. British writer Claire Dodd wrote about this unique spirit for drinks magazine Tonic:

“It’s hard not to feel frozen in time here, where hundreds of tiny shack distilleries dot the fields, and donkeys pull carts of cane to be crushed and ultimately distilled all metres from where it was grown. With an estimated 500 independent producers, Haiti’s clairin industry is unique in the world.”

Apart from the famed Barbancourt distillery, there are no large distillers. Whereas most sugar cane production is industrialised, in Haiti, Chase said “you get a really wild and unique variant of sugar cane”. He went on to say how the different types are like grape varieties with distinct flavours.

How Saint Benevolence clairin is made

Farming is 100% organic because nobody has the money for pesticides, synthetic fertilizer, or herbicides. To make Saint Benevolence clairin, they crush four different varieties of sugar cane using a diesel-powered grinder. The juice is then left in the open air to spontaneously ferment for around a week. It’s then distilled once in a 300-gallon pot still with a three plate column which is fired by burning leftovers from sugar cane production, producing a spirit of about 57% ABV. Chase describes the process as “more art than science.”

They also do something known as “method Saint Michel”, which involves boiling the sugar cane juice to create a syrup. This is then fermented using a selected yeast strain, and then distilled as above. The two are blended and diluted down to 50% ABV to create Saint Benevolence clairin.

Chase described the strength as: “really well-balanced for sipping,” which is how it is drunk in Haiti. But he accepts that clairin with its big funky flavours of green banana “can be polarising.” He hopes that it can emulate the success of mezcal, the spirit clairin most closely resembles in production techniques, history, and flavour. “If mezcal can do it, clairin can do it too,” he said. And apparently it’s already proving a hit with bartenders. It’s superb in limey cocktails like a Mojito or Caipirinha, and it makes a particularly fierce Daiquiri.

100% of the profits from Saint Benevolence go to three charities helping the people of Haiti. There’s Living Hope Haiti, a Christian mission that runs schools in Saint Michel. From that first school, the charity now educates around 1,500 pupils all the way from kindergarten to secondary school. There’s even a university that teaches vocational courses.

Then there are two medical charities: Innovating Health International, helping women and cancer patients, and Ti Kay dedicated to TB and HIV sufferers. “All these organisations are Haitian-led, and Haitians are the only people benefitting and getting a paycheck. We’re really proud of that,” Chase said.

The Babcocks are so serious about transparency that they publish their tax return on their website to show how everything Saint Benevolence makes is going to help the Haitians. In an age where charity work is increasingly seen as a career rather than a calling, this is a powerful statement of intent.

Chase finished by saying that “rum is a beautiful product with a complex and dark past.” Saint Benevolence clairin shows that something tangible can be done to ensure that rum’s future is brighter.

Underripe banana with earthy minerality, and green olives. Plenty of spicy crushed peppercorn heat with clove, cardamom, and crisp sugar on the finish.

Master of Malt @MasterOfMalt
2 hours ago
Elephant Dry #Gin is made with 14 botanicals, including an array of African ingredients – and the brand donates funds to African elephant foundations!

Master of Malt @MasterOfMalt
19 hours ago
Whip up a Strawberry Shrub #cocktail with Piston Gin! Shake your gin with lemon juice and ice, strain into a glass, add crushed ice and a drizzle of berry cordial, then garnish with fresh berries.

Master of Malt @MasterOfMalt
23 hours ago
Made in the Amazon rainforest with a host of native botanicals, Canaïma Gin is deliciously sharp and fruity – and the brand supports reforestation!