As many good stories do, this particular tale involves a bottle of Scotch whisky. And not just any old liquid, either. Bottled in 1948 with ‘Special Old Scotch Whisky’ wrapped around the label,  one of the few remaining bottles of James Eadie’s Trade Mark ‘X’ had been given to Rupert Patrick by his uncle, Alastair Eadie – the great-grandson of Scottish brewer and distiller James Eadie, who was born in Perthshire in 1827.

It was a timely gift. After 25 years in the whisky industry, Patrick had recently departed corporate spirits – having worked for drinks giants Macleod Distillers, Beam Suntory and Diageo – to launch trading platform Whisky Invest Direct with an old school friend. Encouraged by Alastair, he’d found time to visit the National Brewery Archive in Burton-on-Trent, the location of James Eadie’s brewery that operated for 90 years. 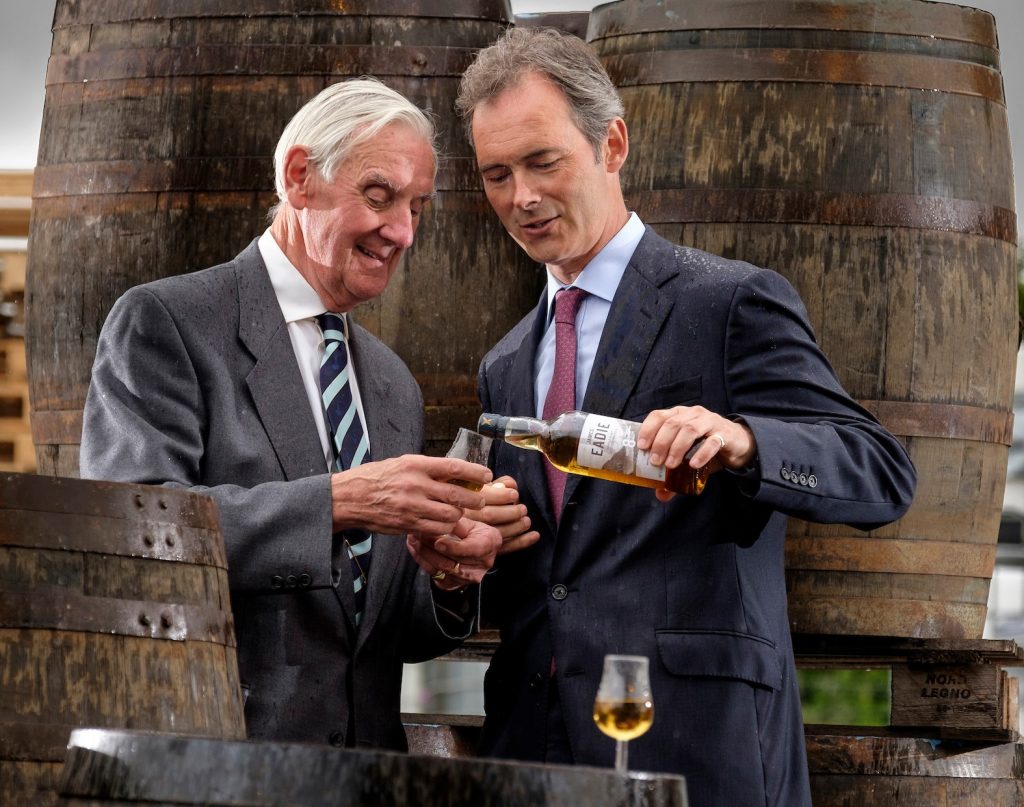 Alastair Eadie and Rupert Patrick enjoying a dram in the rain, as you do

Dating from 1860 to 1900, the ledgers and records were filled with Eadie’s Scotch whisky blending notes – and plenty more besides – including the original recipe for Trade Mark ‘X’. “When Alastair handed the bottle over, he said, ‘I remember drinking that when I was younger, I didn’t like it very much. It was very peaty and I don’t like peaty whisky’,” Patrick recalls. “Now, I love peaty whisky, and as soon as he said that, I thought, ‘if this has stood the test of time then it could be quite amazing’.”

He called on the expertise of Norman Mathison, the former master blender for Invergordon Distillers. “He’d retired, but he was still doing quality sampling for some of the distillers,” Patrick says. He showed Mathison the list of whiskies James Eadie blended to make Trade Mark ‘X’. “I said, ‘I’ve got a bottle from 1948, have a look at the list and tell me if this could make a really good blend if we revived it’,” Patrick continues. “Norman looked up at me with a beaming smile and said, ‘of course I can – these are some of the best malts and grains anybody’s ever used’.”

Together with a small group of industry types, he and Mathison sampled the historic bottling. This final blend had been bottled in 1948 on the instructions of Patrick’s grandfather, a Scotch connoisseur, who had sold the business to brewing behemoth Bass 15 years prior. “It was the last time they ever bottled James Eadie’s whisky,” he reflects. “I reckon he said, ‘look guys, this is the last hurrah – bottle up the old stuff and really make this a great blend’.” 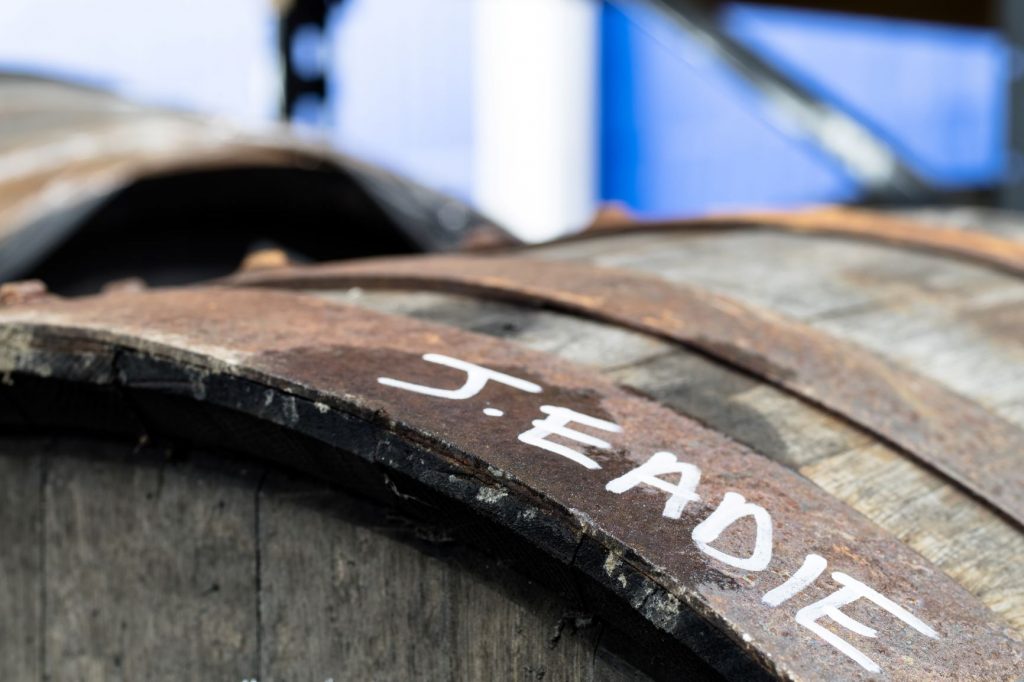 When they opened the bottle, “the colour was incredibly dark, which gives a good signal of age,” Patrick says. “It wasn’t oxidised, the fill level on the bottle was still good, it had been stored upright. As soon as we nosed it, we all just went, ‘oh my god, that’s good’.” While the original is more sherried than its recreation – “a deeper, richer whisky,” he says – it exhibited the trademark balance between peat and the Speyside whisky that James Eadie had been known for in his heyday.

Satisfied that he was onto something special, Patrick’s next job was to procure casks from the  various Scotch whisky distilleries that made up the original Trade Mark ‘X’ recipe, which include Lagavulin, Aberlour, and Cameronbridge. Trickier than you’d expect, and not just because two – Littlemill and Cambus – have since ceased production. It took a year to obtain the various components that Mathison needed to recreate the blend.

Despite the challenges, he and co-founder Leon Kuebler were determined they would only use whiskies from distilleries Eadie personally bought from. “We just decided to stick really religiously to what he did,” Patrick explains. “We’ve stuck to the knitting and in Trade Mark ‘X’ created a really balanced, structured all-rounder. It’s such a lovely balance between Speyside, Islay, Lowland and Highland.” 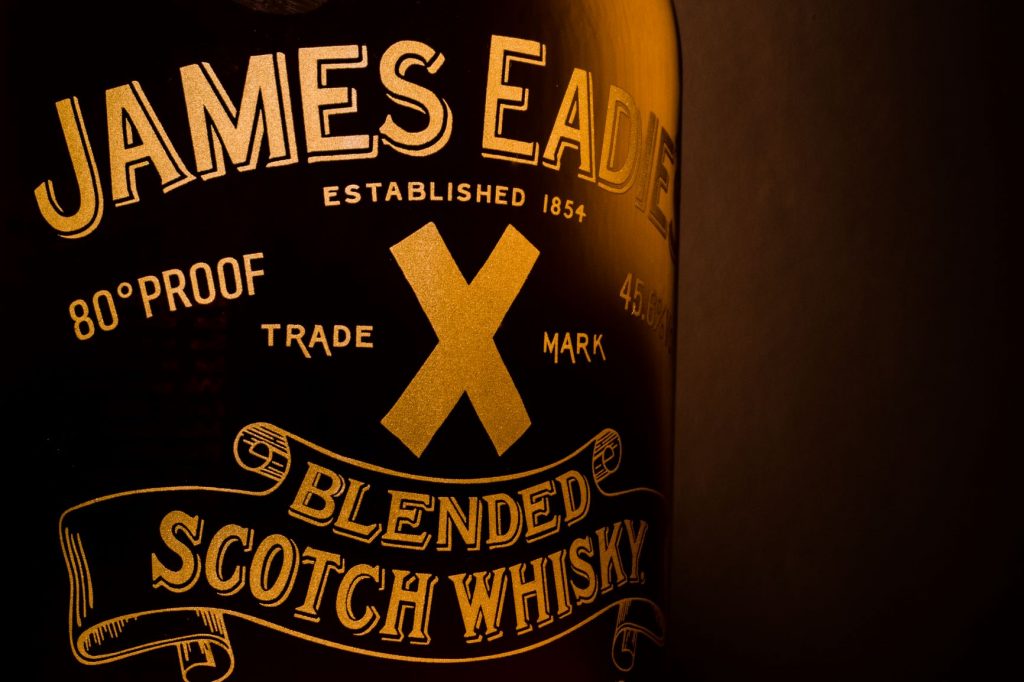 The name – Trade Mark ‘X’ – is in itself a slice of whisky history. The UK Trademark Act was introduced in 1875, and “the first symbol to be trademarked in the UK was Bass’s red triangle,” says Patrick. “Bass was next door to James Eadie in Burton on Trent – as you know they eventually bought his business – so he decided to trademark his own symbol not long after.” Since Eadie’s brewery was based on Cross Street, he and the team decided to trademark an ‘X’ in 1877 – “well ahead of many other Scotch whisky brands,” he says.

James Eadie’s trademarked liquid lives on – not just in this bottling, but across the entire label. “Whenever we do cask finishes, we only use wood that James Eadie used in the 19th century,” Patrick says. “There’s plenty of scope – Marsala casks, Madeira casks, lots of oloroso, PX, palo cortado – so we’re not limited to just a few things.” With such a comprehensive record of recipes to draw from, there’s scope to recreate other blends, too. “There are lots of possibilities,” Patrick says, “but the most important thing is to stay true to the spirit of James Eadie.”

James Eadie Trade Mark X is available from Master of Malt along with a range of single malt bottlings.

Master of Malt @MasterOfMalt
4 hours ago
Elephant Dry #Gin is made with 14 botanicals, including an array of African ingredients – and the brand donates funds to African elephant foundations!

Master of Malt @MasterOfMalt
21 hours ago
Whip up a Strawberry Shrub #cocktail with Piston Gin! Shake your gin with lemon juice and ice, strain into a glass, add crushed ice and a drizzle of berry cordial, then garnish with fresh berries.

Cocktail of the Week: The Dalgona Martini