Annie Hayes
2 Comments on What makes a bottle design iconic?

Mankind has been storing spirits in glass for hundreds of years but what does it take to make a particular bottle design iconic? We touch on the most fascinating aspects…

Mankind has been storing spirits in glass for hundreds of years but what does it take to make a particular bottle design iconic? We touch on the most fascinating aspects of booze bottle design – from historic, barely-changed labels to pricy, record-breaking vessels – and speculate about the future of spirited packaging…

When a spirit goes global, so too does its bottle. Not only are the most famous brands defined by their shape and label – Jack Daniel’s and Patrón Tequila, for example, are recognisable by the silhouette alone – but often, clever design is part of what makes them so coveted in the first place. The right bottle can communicate elements of the spirit’s character, such as sense of place, but it can also work on an emotional level, appealing to a potential’s buyer’s sense of self. With brands jostling for space on back bars, websites and retail shelves in a crowded market, this personal connection is increasingly important.

Fittingly, many bottles are a real labour of love. The Maker’s Mark design is near-identical to the original prototype by Margie Samuels, wife of founder Bill, in the early 1950’s. Made in their kitchen from papier-mâché, it was inspired by her collection of antique Cognac bottles. “My favourite detail is the indent at the bottom of the neck – it was deliberately intended to create that ‘glug’ when pouring the liquid,” says brand diplomat Nicole Sykes. Margie’s creative influence extends far beyond bottle shape, to the hand-dipped red wax beading – fashioned using a melted candle stick and a deep-fat fryer – and the font on the label, which is die cut, by hand, on a 1930’s print press to this very day. “We say, ‘Margie is the reason you buy your first bottle of Maker’s Mark, and Bill is the reason you buy your second’,” says Sykes.

Plenty has changed since the fifties, but when it comes to attracting new drinkers, the bottle is as important as ever. For independent producers without vast marketing budgets to fall back on, it can be make or break. “It’s everything,” says Robert Hicks, co-founder of the Highland Liquor Company, which produces Seven Crofts and Fisherman’s Strength gins. “At the very start, a drinks industry veteran said to us, ‘you need a bottle that stops traffic, but what’s inside has to be even better’.” The bottles reflect the distillery’s wild, scenic location – green ombre for the woods meeting the North Atlantic; blue ombre for the sea. “We always wanted a tall genever-style bottle that’s classic in look and tactile in feel,” he says. “The label had to sit high so even if we find ourselves at the back of a shelf, we’re never hidden away.”

Presenting the fruits of your labour in eye-catching packaging is a phenomenon that reaches back hundreds of years – just ask Ireland’s Old Bushmills Distillery. Dating back to the early 1608, it’s the oldest licensed whiskey distillery in the world. “The oldest bottle we have on-site is from 1882,” says master distiller Colum Egan. “It represents the very earliest stages in Bushmills bottling, as before this, whiskey would have been sold more typically in earthenware jugs, or in barrel form with it being bottled on-site by the customer. It’s believed that the square shape was chosen to stand out among other brands at the time.” Clearly it worked – the design has survived largely unchanged in the 140 or so years since.

In those early days of bottle design, transporting booze was a precarious undertaking, so functional packaging came foremost. When the Luxardo family began bottling Maraschino liqueur in northern Italy 200 years ago, they could never have known that protective packing would become a trademark. “Early bottles were made on Murano island off Venice, famous for its glass,” says global brand ambassador Gareth Franklin. “They were protected with a straw wrap for their journey to Luxardo for filling. The wraps also helped to ensure safe transit to far off new markets such as America. Ever since, the distinctive wrap has been a feature of authentic Luxardo Maraschino. The green bottle, white label, and red bottle cap were proudly designed to reflect the Italian flag.”

The EH Taylor bottle has barely changed in an 100 years

Besides looking attractive and traveling well, distinctive bottles pledge authenticity and craftsmanship. They represent a handshake between the distiller and the drinker; something Edmund Haynes Taylor Jr. knew all too well when he designed the Old Taylor bottle more than a century ago. “Taylor’s design assured quality and honesty by stating, ‘let the label tell the truth’,” says Kris Comstock, senior marketing director for premium whiskey at Buffalo Trace Distillery. Today’s design is a tribute to the great man. “The Old Taylor brand name is now Colonel E.H. Taylor Jr. and his portrait on the label features Taylor wearing a top hat – otherwise the label is very much the same as Taylor’s original design,” Comstock says.

In the last few decades, we’ve seen a rise in ultra-expensive designs. From bottles dipped in 24 carat gold to hand-blown crystal decanters, producers have presented their rarest liquids in one-of-a-kind vessels worth eye-watering amounts of money. The priciest? D’Amalfi Limoncello Supreme, embedded with one of the world’s rarest diamonds, of which just two bottles were ever made. Yours for a cool £27 million. If that’s too pricey, Pasión Azteca Tequila 2010, studded with 6,400 diamonds, is slightly more affordable at £2.1m. The Macallan Fine & Rare 60 Year Old 1926, which fetched a record-breaking £1.5m at auction in 2019 – making it the most expensive bottle of wine or spirit sold under the hammer – seems like a comparative bargain.

Among us regular mortals, sustainability has been established as a marker of quality – and this eco-friendly ethos is growing prominent in packaging. Scotland’s Nc’Nean Distillery made headlines by presenting its inaugural single malt, Annir, in a 100% recycled clear glass bottle. Last year, Diageo developed a 100% plastic-free paper-based spirits bottle for Johnnie Walker, made from sustainably sourced wood. Bacardi is trialling a biodegradable bottle made from plant polymer, with plans to roll it out across the company’s portfolio by 2023. Amsterdam-based Fitzroy Rum, meanwhile, rescues washed-up Coca-Cola labels from the North Sea and repurposes them into toppers for its arty bottles.

No matter whether it’s a traditional brand or a contemporary bottling, one thing is clear: much time, effort and care goes into the bottle design. Next time you pour a dram or mix up a cocktail, take a closer look at the bottle. There’s probably a good story behind it.

END_OF_DOCUMENT_TOKEN_TO_BE_REPLACED
2 Comments on What makes a bottle design iconic?

Master of Malt @MasterOfMalt
12 minutes ago
We're so glad they arrived safely, congratulations again and we love how you've arranged them! The only question is; which @Tomatin1897 will you open first? https://t.co/o1p0e3ZkBq
View on Twitter 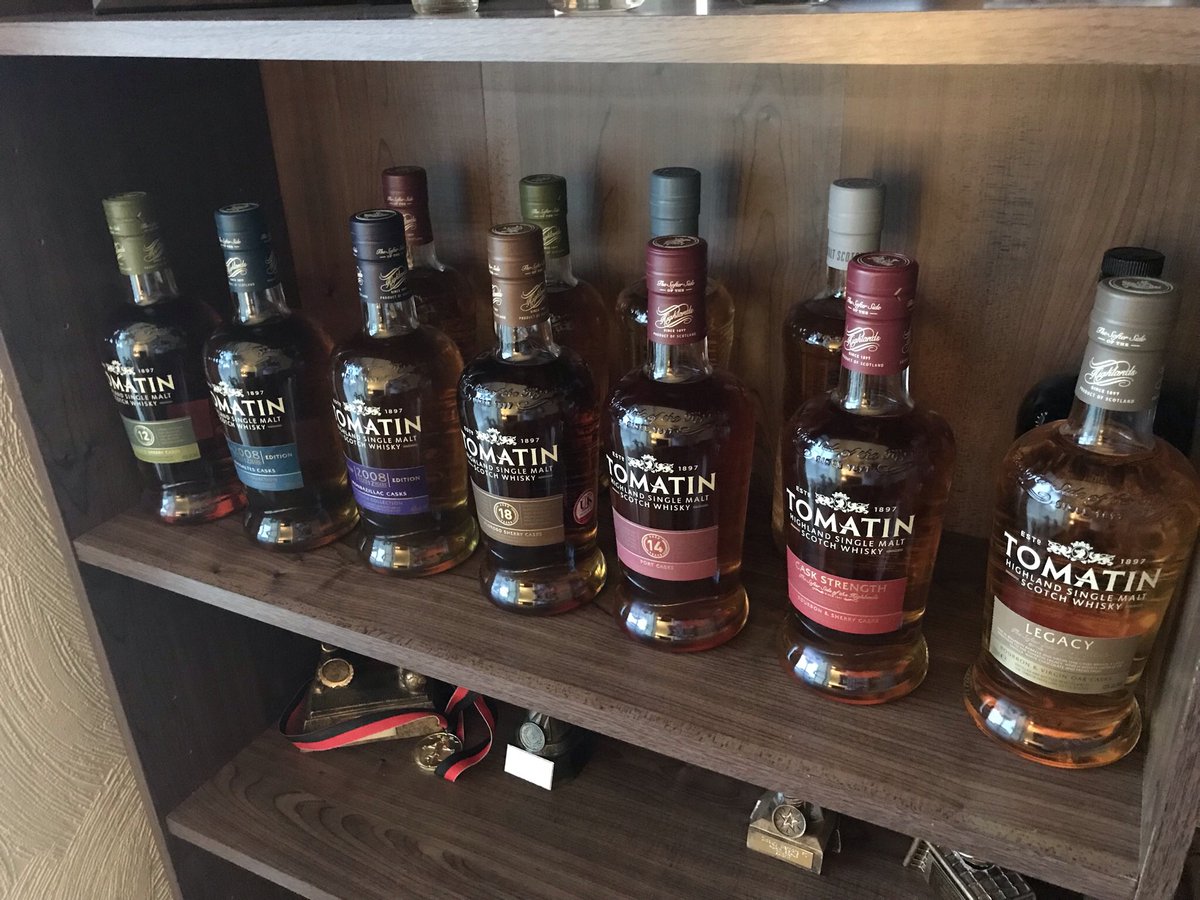 Master of Malt @MasterOfMalt
2 hours ago
As ever, #WhiskySanta's will be back to grant more wishes tomorrow, and will be popping thousands upon thousands of gifts in lucky MoM orders in the meantime. 'Tis the season to be giving, after all! 🥃🎅
https://t.co/FVroB8nQnJ
View on Twitter
3
13

Master of Malt @MasterOfMalt
2 hours ago
Don't forget that #WhiskySanta has a truly extraordinary Super Wish this week too! Be sure to place your wishes for @GlenfiddichSMW 40 Year Old for your chance to win this epic Christmas pressie! 🎄🎁