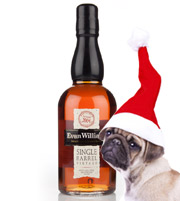 Time to open the third window of our Whisky Advent Calendars and see what surprise lies behind it… why I think this is a bourbon… Yes, it’s Evan Williams Single Barrel Kentucky straight bourbon whiskey!

They’ve been producing Evan Williams at family-owned Heaven Hill since 1959 you know, and it’s named after the chap who was purportedly Kentucky’s first ever commercial distiller. I remember young Evan very well, of course, but as an omniscient supernatural being I’m not allowed to clear up these little historical facts for you I’m afraid. Rules is rules. Besides, there’s some delicious bourbon to taste…

3. WIN A BOTTLE – Below you’ll find the Chaps at Master of Malt’s tasting note for this whisky – think you can do better? Leave your tasting note on the Evan Williams 2013 or 2014 Product Pages in the User Review section (making sure to leave your details afterwards***) for a chance to win a bottle of the latest Single Barrel!

4. Ask #WhiskySanta – I’m still granting one wish every day, so why not wish for a bottle of Evan Williams Single Barrel on Twitter or Facebook now?!

“Tasting Note by The Chaps at Master of Malt for Evan Williams Single Barrel: