The grand countdown to Christmas Day has entered single digits – and today there’s a dram from a suitably epic location to celebrate. It’s Isle Of Jura 18 Year Old!

Many a distillery plays on its remote location in its marketing. But Jura may just be able to make that claim stick. To visit the island distillery you first need to get to the Glasgow area. Then it’s either a ferry or a flight to Islay, followed by a teeny tiny ferry over the small but mighty Sound of Jura, then you’re on the island. But it’s another eight miles or so down a single track round until you reach the village of Craighouse and the warmest of welcomes.

Jura is a Hebridean island made famous for its sizeable deer population (6,000 or so), it’s tiny human headcount (approximately 200), and because it’s where George Orwell marooned himself to write 1984. It’s also home to the Jura Distillery, which is where today’s dram comes from: Isle Of Jura 18 Year Old!

It’s a treat of a dram, matured in American oak barrels before it was finished in Premier Grand Cru Classé Bordeaux barrels for a full-on fruity vibe. A perfect sipper on a dark December evening.

As we tuck into the dram, we catch up with distillery manager Graham Logan, to get his take on island life, the distillery’s history, and what he’ll be drinking this Christmas… 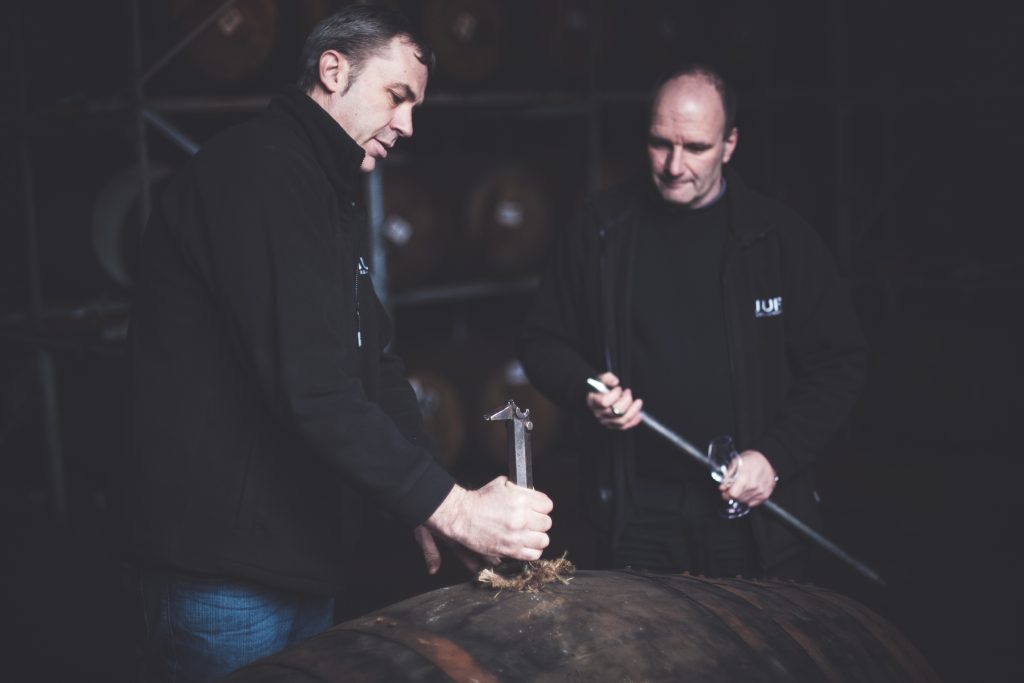 It’s Graham Logan (on the right)!

Master of Malt: Jura Distillery is set in a stunning but incredibly remote location. Talk us through a typical day on the island…

Graham Logan: As with most on the island, I have a dual role in the community so my first job of the day isn’t actually at the distillery! I live on a croft, so at the crack of dawn, I am up and out feeding all the animals. Then it’s a five-minute ‘commute’ down to Craighouse, the heart of the island and home to the Jura Distillery and most of the community. Believe it or not, there is the occasional traffic jam en route, but I’m not talking about cars, I’m talking about the red deer or pheasants who like to take the run of our single-track road from time to time! When I make it to the distillery, I like to take a few minutes taking in the view from my office window – palm trees, small isles bay, Kintyre peninsular and even over to Ben Cruachan and Ben Lomond in the distance. The sunrises on Jura are spectacular, and a brilliant way to set yourself up for the day ahead.

I will then spend the next few hours touring the distillery, I will talk to all the site team and do some testing. Usually, gravities of washbacks, mash tun temperatures and doing a shake test on the malt grist. On Jura the pace is a little slower, so we’re never without our 10 am tea break! Then it’s on to catching up on emails and all my regulatory paperwork. In the afternoons, you might see me doing guest tours, talking to visitors who take the effort to come to our remote shores or spending time in a warehouse checking on some of our 30,000 casks.

MoM: How does remote island life affect the character of the whisky or the whisky-making process?

GL: Jura is blessed that the Gulf stream, all the way from the Caribbean, passes up our west coast and keeps Jura very mild in the winter. Snow is a once in a ten-year phenomenon, so our warehouses are a pretty constant temperature which allows our maturation cycles to last longer. The wood grains of the staves on our first-fill ex-bourbon barrels never quite close, which allows maturation to take place all through the winter. The warehouses are only 100 yards from the sea, allowing the salt air to penetrate our casks, leaving a very slight salt note. What makes some of this possible are our exceptionally tall, lantern-shaped stills (25ft 4 inches); only the lightest floral noted spirit makes it to the head of the still. This light spirit is the perfect partner for maturation with the American white oak ex-bourbon casks that each Jura whisky starts its life in. 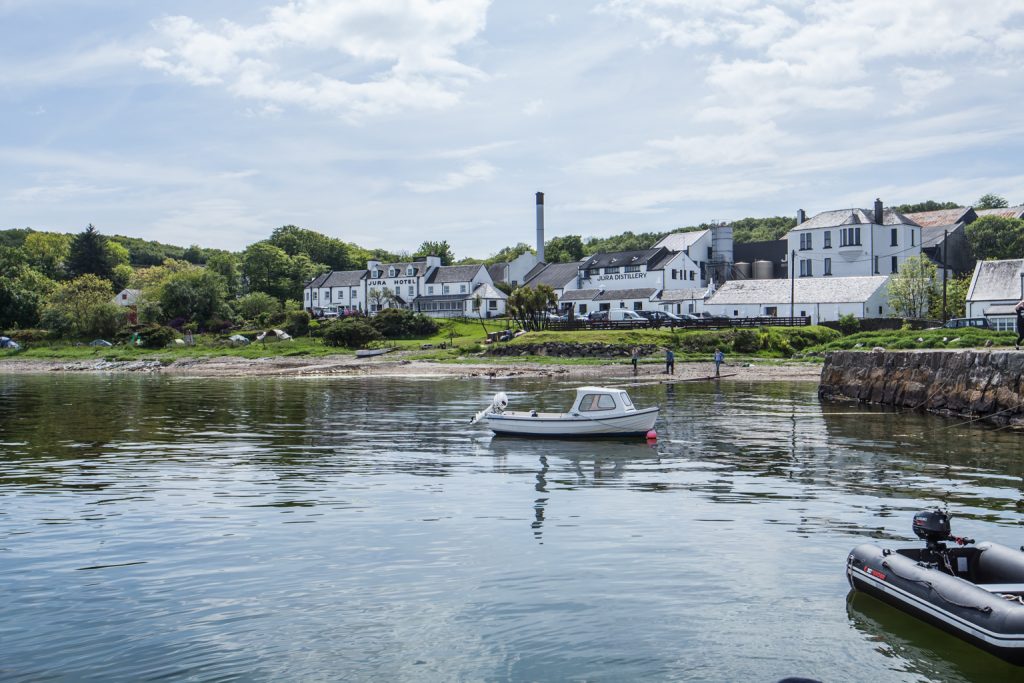 GL: I have been at Jura distillery for 28 years and have had some escapades in that time! I had the misfortune to mash some heavy peated barley by mistake one day and because I had a cold at the time, I didn’t notice. Our then manager Willie Tait had a hairy fit and suffice to say, I wasn’t brave enough to do it again! The distillery also had a tractor and trailer for delivering the casks from the filling store to the warehouses. I got to drive it and managed to crash it within 30 seconds. A cask fell off the trailer and went speeding towards the hotel and only the nimbleness of Iain Cameron (our warehouseman) saved the day as he diverted the cask before it was sitting in the bar and whisky really was whisky galore! Surprise, surprise, I was banned from driving the tractor.

GL: My tipple of choice this winter will be the Jura Tide. It’s our new 21 Year Old and started its life in American White oak ex-bourbon barrels before being enhanced with a finish in virgin American oak white oak casks. I am also inclined to enjoy a dram of Jura 18 Year Old; Jura whisky enhanced in any red wine cask is excellent but this is really special with a finish in Premier Grand Cru Classé Bordeaux barrels. Delicious, especially on a crisp day! 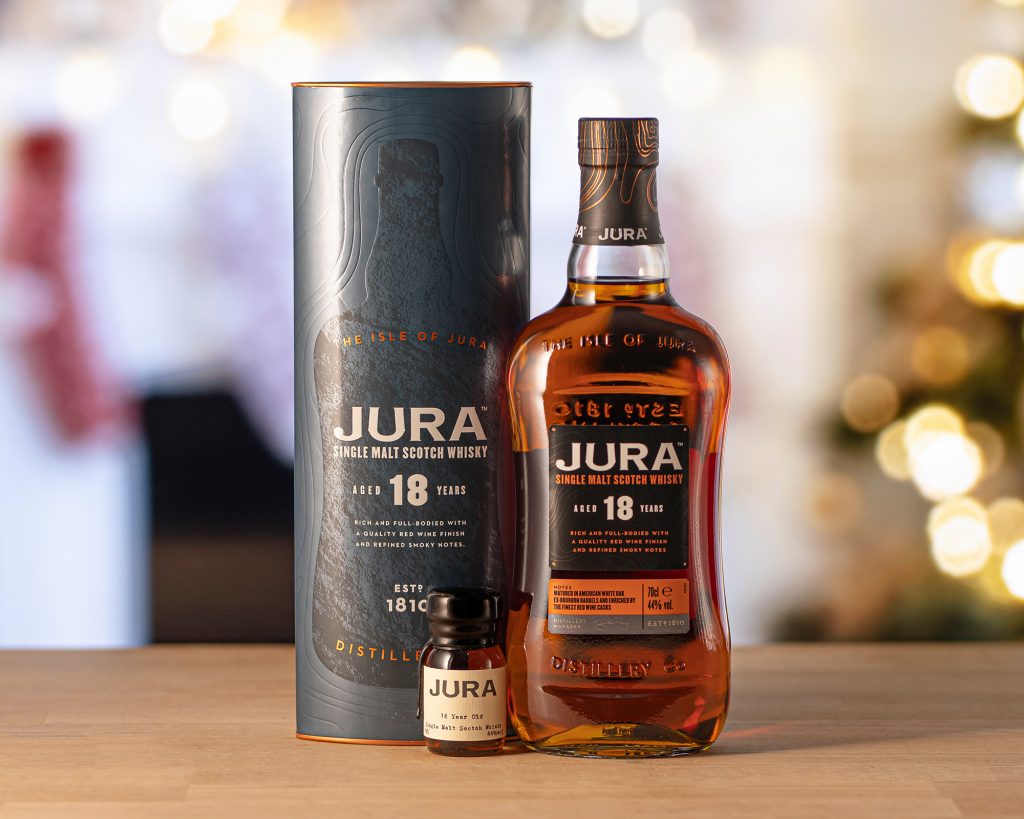