What the heck’s a swan neck?

Lucy Britner
1 Comment on What the heck’s a swan neck?

Ever wondered why Sipsmith has a swan for its spokesbird? Or what the bit that bends at the top of a still is called? Well, wonder no more. Lucy Britner explores the world of the swan neck and looks at how different iterations affect the flavour and character of spirits such as whisky and gin.

Stills are a bit like people. They come in all shapes and sizes, they all have their own character and some even sing (hello, Mortlach). A still’s swan neck – the bit at the top that curves to connect to the lyne arm – also has its own vibe and the angle of a swan neck can have an impact on the spirit in question. 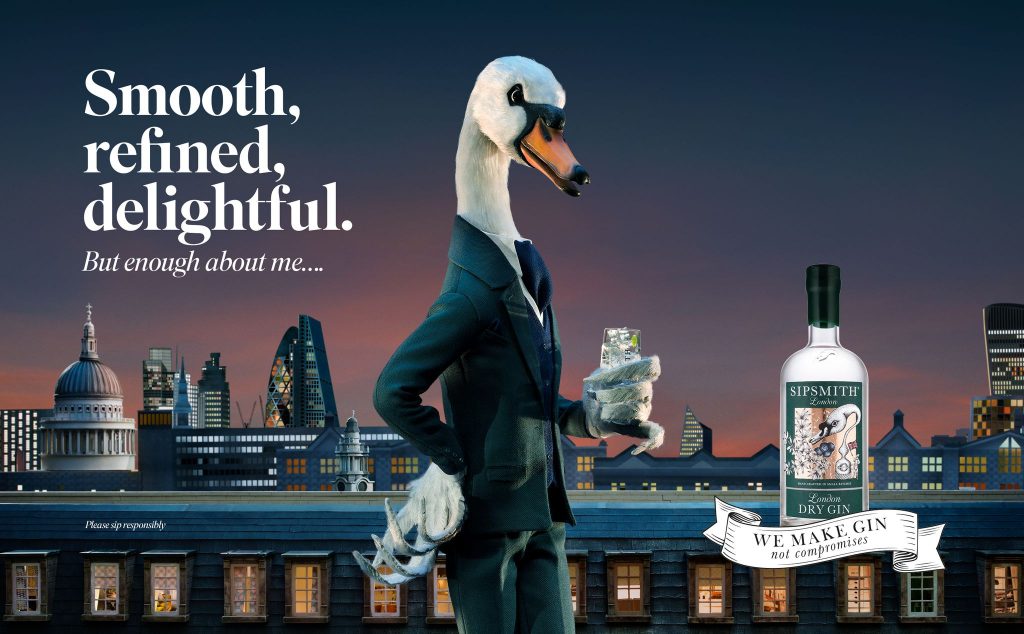 Sipsmith has a swan brand ambassador

Swan necks are so important that intense focus on the first still’s swan neck design at Sipsmith caused the swan to creep (waddle? glide? swan?) into everyday conversations  – and it went on to influence the brand’s entire identity.

“I remember a sign inside the door of the tiny garage on Nasmyth Street where we started out: ‘Swanny says – did you remember your keys and wallet?’,” Sipsmith master distiller Jared Brown tells me. “The artist who sat in the distillery taking notes before creating our label and immortalising our swan had to see that sign and must have heard the word a few times.”

Not only is Brown a master distiller, he’s also a master at explaining the swan neck. Pour a G&T and take note.

“A classic copper pot still begins with the pot, which holds the liquid and is where it is gently heated to convert it to steam,” he starts. “The steam rises from the pot, then condenses on the sides of the helmet above the pot. This causes it to run back down the inside of the still against the highly-reactive copper repeatedly, with impurities leaving the spirit and bonding to the copper with each pass. Once steam reaches above the helmet it passes into the swan neck which leads to the condensing coil where it will be cooled and returned to a liquid state.”

A still’s swan neck dictates how easily the liquid passes from the pot and helmet to the condensing coil. Brown explains that stills with broader swan necks that slope steeply downward carry heavy, smoky, oily, peaty flavours. Meanwhile, stills with necks that slope upwards from taller helmets, and have narrowed diameters bring more refined notes, while causing the heaviest flavours to remain in the still.

Te still set-up at Sipsmith, note the elegant swan necks on the stills

Of course, the beauty of building your own distillery is that you get to choose everything.

New kid on the block White Peak Distillery in Derbyshire is launching its first whisky in autumn this year. The dram will join its Shining Cliff Gin, which is already available.

“One of the unique benefits of starting a whisky distillery is the opportunity to design bespoke equipment, including pot stills to achieve a desired style of spirit, and the connection this gives for the whisky-makers through design to spirit,” says White Peak co-founder Max Vaughan.

He describes the distillery’s spirit still as having an oversized pot (for the batch size) with a modest fill level, a tall and relatively thin neck and a gently upward sloping and long lye pipe, and finally a copper shell and tube condenser. Vaughan says the combination of these features encourages reflux/copper contact and the spirit to “work hard”, therefore helping to strip out some of the heavier compounds.

“We also run the still slowly which gives the still shape more influence and helps with hitting our desired cut points to produce a smooth and fruity, lightly-peated spirit,” he adds. 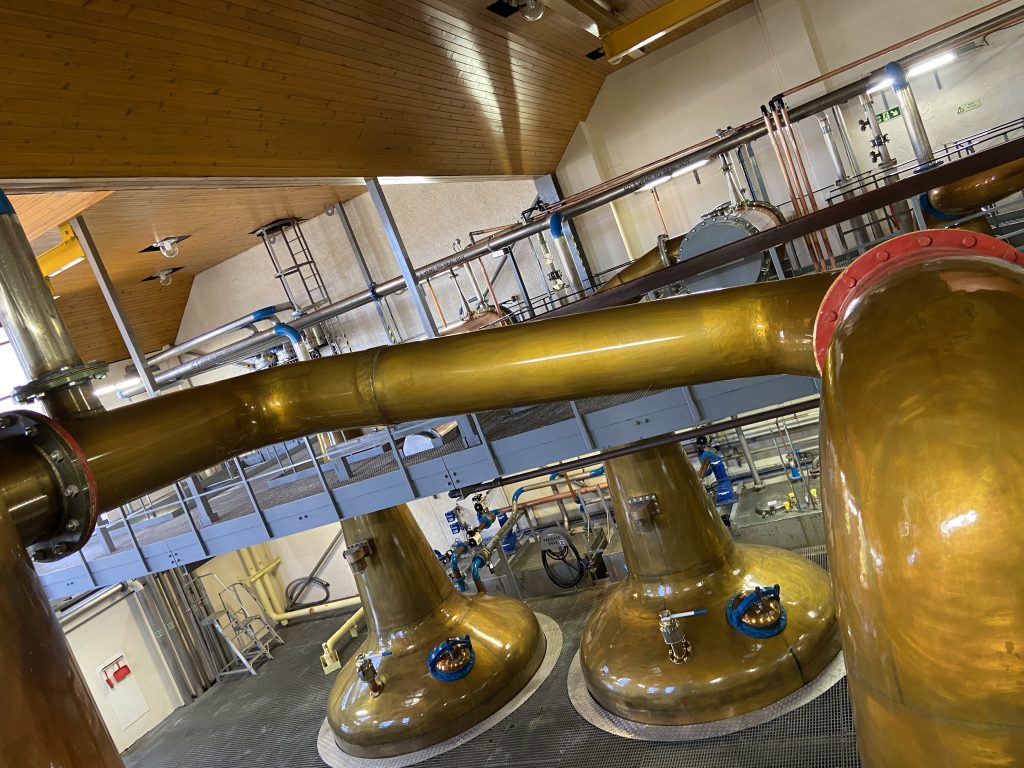 Building a distillery from scratch isn’t a reality for everyone and on many occasions, especially when it comes to re-jigging older facilities, fitting in with the space can determine the set up of a swan neck.

Bacardi brand ambassador, Matthew Cordiner describes the Macduff distillery, which makes The Deveron, as a “bit of a Mad Hatter’s tea party”. Indeed, if a real swan had the neck from a Macduff still, it would either be able to see around corners or be in serious pain.

“Two wash stills have a right-angled kink in them [in the foreground above], which is pretty unusual, leading to the vertically mounted shell and tube condensers,” says Cordiner. “This was more about how to best fit them into the space than a flavour-led decision. But the fairly steep upwards sloping lyne arms will encourage more reflux and re-boiling action – meaning less lower volatility compounds will be able to make it through the first distillation run.”

The distillery also has a rather unusual spirit still set up – pretty small and narrow stills, giving lots of copper contact and very short lyne arms [in the background above], which are also angled upwards and have a right angled kink in them.

“These would again encourage a bit more reflux, though any ‘lightness’ this might have brought is almost undone by having horizontally mounted shell and tube condensers,” Cordiner adds. “The horizontal condensers mean that less ‘weight’ is stripped from the spirit through copper contact. This creates almost a midpoint between a vertical shell and tube and an old fashioned worm tub, we do have a light/moderate sulphur character in the new make spirit because of this, too.”

Cordiner emphasises that it’s a combination of all of this, plus how the distillery makes its cuts, which creates the balance between fruitiness and cereal/nutty characters, as well as the signature ‘apple’ note The Deveron is known for. 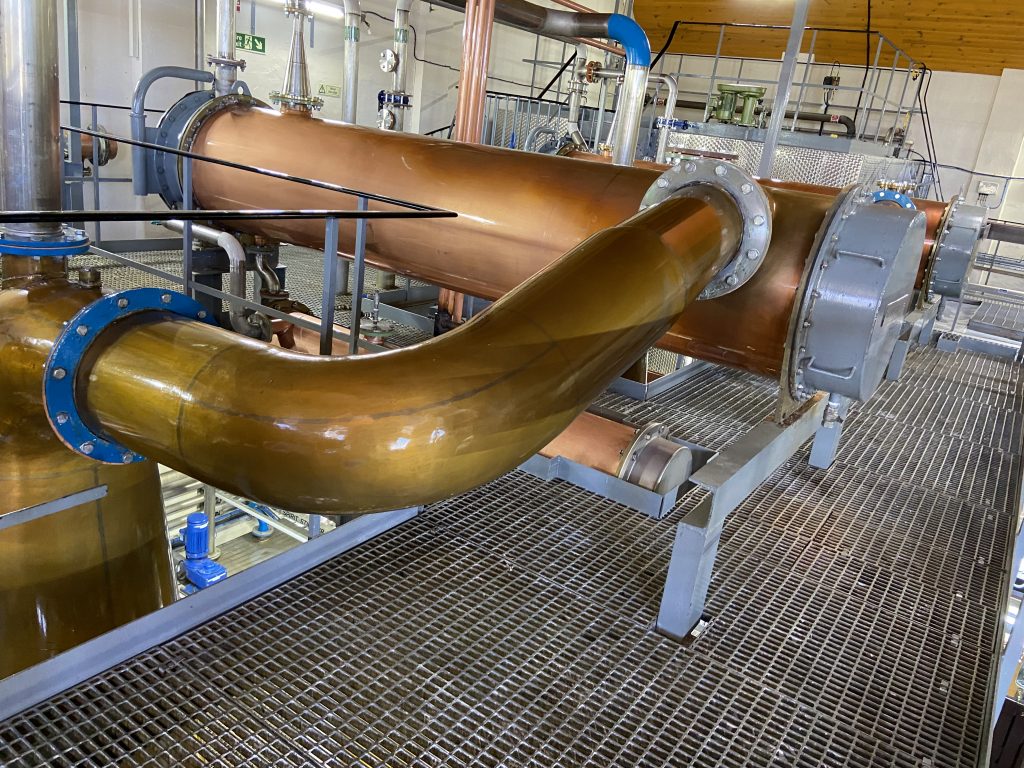 It’s the way that you do it

“Still shape and configuration is really important but it is also down to how you run them,” he says. “If you take our Aultmore distillery for example, with its short stills and descending lyne arms, at a glance you would have thought they were producing a more robust style of whisky, but by the way in which they are run, we are able to create a light, grassy and biscuity style of whisky.”

And so, it is a truth universally acknowledged that it is the whole process combined that creates a spirit’s character – but there is no denying the swan neck plays an important part.

So important that the eagle-eyed Latinists among you will note the term ‘cygnus inter anates’ on the bottom of all Sipsmith bottles. A slogan created by Sipsmith co-founder Fairfax Hall, meaning ‘a swan among the ducks’.