This week at Master of Malt it was all about whisky icons. No, not elaborate devotional paintings of Bill Lumsden or Rachel Barrie – though they sound amazing – but distilleries and brands that are iconic. So we’ve been asking customers on social media which whiskies are worthy of veneration and, at the time of writing, it’s come down to a four-way all-Scottish dust-up between Ardbeg, Bunnahabhain, Lagavulin and Talisker. All distinctive island whiskies with a particularly strong showing from Islay. MoM customers clearly love a bit of Islay. It’s all taking place on Twitter so get voting. We’ll announce the winner on Monday. There can only be one!

The week got off to an expensive start as we talked to Richard Paterson about the super-fancy Dalmore Decades collection which has just landed at MoM. It was delivered in a special Whyte & Mackay armoured car which the company uses only for it’s most elite whiskies. Good whisky doesn’t have to be expensive though, as Aber Falls has proved with the second release of its Welsh single malt. Then Adam got taste of the first release from Midleton’s micro distillery, the Method & Madness Rye and Malt Irish Whiskey, and we launched our Whisky Icons competition. Lauren Eads returned to show us how to make a Singapore Sling, and Henry tried Waterford Cuvee and pondered the future of whisky *strokes chin*. Right, that’s enough chin stroking, it’s on with the Nightcap: 24 September edition!

There was no doubt what was the biggest story of the week. On Monday we learned that Pernod Ricard had acquired The Whisky Exchange from its owners Sukhinder and Rajbir Singh. The brothers said in a statement: “The Whisky Exchange and our customers have always felt like a family, and we are looking forward to maintaining this ethos with a partner that shares our values. Our mission remains the same: to offer the finest range of whiskies and spirits from the best producers around the world, educate and engage with consumers, and support the top on-trade establishments around the UK”. Alexandre Ricard, chairman and CEO of Pernod Ricard, added: “We are thrilled to work with industry pioneers such as Sukhinder, Rajbir and the whole team to bring The Whisky Exchange to a new step of its development.” There was no mention of how much Pernod Ricard paid but industry analyst Jefferies on the Business Wire estimated it to be between: £360m and £420m. That’s a lot of Pernod. The deal includes the Whisky Exchange website, shops, Whisky.Auction and trade arm Speciality Drinks. However, it does not include agency Speciality Brands or Elixir distillers. So the brothers are holding onto their Islay distillery. Very canny.

It’s been a big week on the blog for Irish whiskey with Method and Madness Malt and Rye, and Waterford Cuvee. Now it’s Bushmills turn with rare releases called ‘the Causeway Collection.’ It’s the second such offering from Northern Ireland’s most famous distiller. Henry tried three bottlings: a 2011 finished in Banyuls casks (a Port-style wine from the South of France); a 1995 vintage finished in Marsala casks, and a 32-year-old matured in a Port cask. The latter is one of the oldest ever whiskeys from Bushmills. Master distiller Colum Egan commented: “The Causeway Collection celebrates our extremely rare and unique cask finishes, our passion for single malts, and honours our rich heritage. It’s a privilege to work with such rare liquid, these special cask-finished whiskeys really are our greatest treasures. We were delighted with how the Bushmills Causeway Collection was received globally in 2020, with some even selling out in minutes – and we can’t wait to share this year’s collection with the world.” Then Adam attended the UK launch which fetured an appearance from George the Poet, who wrote a poem (Singular Tales) and featured in a short film that brings together words, music, and images to reflect the home of the Causeway Collection. He was a magnetic presence at the event, talking about the parallels of storytelling, how the best stories are right in front of us, and how important the little moments are. Adam also got a taste of the Marsala cask whisky (stunning, so fruity it’s like chewing on a whole bag of Maynards Sports Mixture while someone sprays Um Bongo in your face) and the 32-year-old Port cask, which was a more subtle but still delightful dram that luckily we’ll be getting soon. But, as Egan warns, they’re unlikely to hang about. Prices start at €55 for the 2011, great value for such a distinctive whiskey, up to a punchy €950 for the 32 year old.

Glenmorangie has partnered with Japanese flower sculptor Azuma Makoto to create a fabulously floral limited edition design for its 18 Year Old. We skipped up to the Saatchi gallery this week to check it out and were treated to a private view of the RHS Botanical Art and Photography Show. The Glenmorangie team served up some fabulous cocktails, cleverly named using anagrams of Glenmorangie. First up we had A Ginger Lemon – a Glenmorangie Original highball with lemon bitters and a splash of ginger ale, most refreshing whilst we wandered the botanical illustration rooms. Secondly we were treated to a Gleaming Reno, shaking up passion fruit and pineapple – a tremendously tropical treat whilst we took in the photography finalists and winners. Special mention from us goes to Faye Bridgwater, with some super colourful artwork in the show, and some serious alliteration skills. We loved the name of this painting: A Bloody Great Big, Ballsy and Bountiful Buncha Bodacious, Buoyant and Bewitching Blooms. Well said Faye!

Over on Islay, the Bowmore Distillery has got something big planned for 2022. Earlier this week it announced that it’ll be launching a collection of extraordinarily rare expressions at the start of next year, with a 50-year-old 1969 vintage single malt in the spotlight. The final release in Bowmore’s 50-year-old vaults series, following on from a brace of other vintages from the ’60s, it was matured in a combination of American oak ex-bourbon barrels and hogsheads for half a century before being bottled up. It’s set to retail at £35,000, so start digging through your sofa cushions now. Clearly not content with one with just the one well-aged whisky, the collection will also feature the 2021 releases of Bowmore 30 Year Old and Bowmore 40 Year Old, priced respectively at £2,000 and £6,750. Again, prepare to ransack those sofa cushions.

The Macallan’s Double Cask range grows once more, this time with the addition of a particularly impressive 30 year old. Its three decades have been spent in sherry-seasoned new American and European oak casks, the former sourced from Ohio, Missouri, and Kentucky, and the latter sourced from northern Spain and southern France. Both wood types are toasted in Jerez, filled with sherry and seasoned for up to 18 months before finally holding the whisky. “The Macallan Double Cask 30 Years Old is a modern take on our classic 30-year-old and is an exceptional aged single malt,” says Kirsteen Campbell, master whisky maker. “With a rich combination and depth of flavour and a complex character, it is a whisky to be savoured, exhibiting notes of cinder toffee, fresh honeycomb, rich vanilla and red apples.” As you’d probably expect, the RRP is by no means small, clocking in at $4,000 – though it does come presented in a solid oak presentation box for that price tag. Who doesn’t love a solid oak presentation box?

Craft Distilling Expo is back, Back, BACK!

Are you a craft distiller or are you craft distilling curious? Then you need to get a ticket to the Craft Distilling Expo which runs from 30 September to 1 October at the Old Truman Brewery in East London. Yes, in real life. None of this Zoom nonsense. Co-founder David T Smith commented: “As with the whole industry the last 18 months have been a challenge, despite the success of our online offerings. We are really looking forward to seeing friends and colleagues, both old and new in-person this year; we’ve put on an exciting range of talk with an increasing focus on sustainability.” Highlights include Ian Wisniewski on tasting, Peter Holland with a guide to botanical and spiced rum and Julia Nourney looking at barrel finishes. We’re also intrigued by ‘ultrasonic spirits’ with Ben Marston of Puddingstone Distillery – does that mean they move really fast? Well, there’s only one way to find out. Go to the website for more information.

Sam Adams Utopias, it’s beer but not as we know it

And finally… a beer so strong it’s illegal

What do you think is strong for a beer? 6% ABV? 8% ABV? Well, how about 28% ABV? No, that’s not a typo. The latest release of Sam Adams Utopias from the Boston Beer Co. is stronger than Port and getting on for whisky territory. It’s so strong that it’s illegal in 15 states in America. Apparently, it’s made with special ‘Ninja yeasts’ which can work at very high alcohol levels. The release is made up of aged beers dating back decades and aged like whisky in old bourbon, Port, Madeira and sherry barrels. It’s released every two years and for the first time this latest batch contains beer from Sauternes casks. All this magnificence doesn’t come cheap, around $240 retail, but if you live in Alabama, Arkansas, Georgia, Idaho, Missouri, Mississippi, Montana, New Hampshire, North Carolina, Oklahoma, Oregon, South Carolina, Utah, Vermont, or West Virginia, you’re out of luck.

Master of Malt @MasterOfMalt
18 minutes ago
Torn between buying Halloween decorations or some booze for the party? Take a look at Kah Reposado #Tequila! Housed in a painted ceramic skull, leave this tasty tequila lurking on your bar, it'll turn some heads, make a few eyes pop out of their sockets. 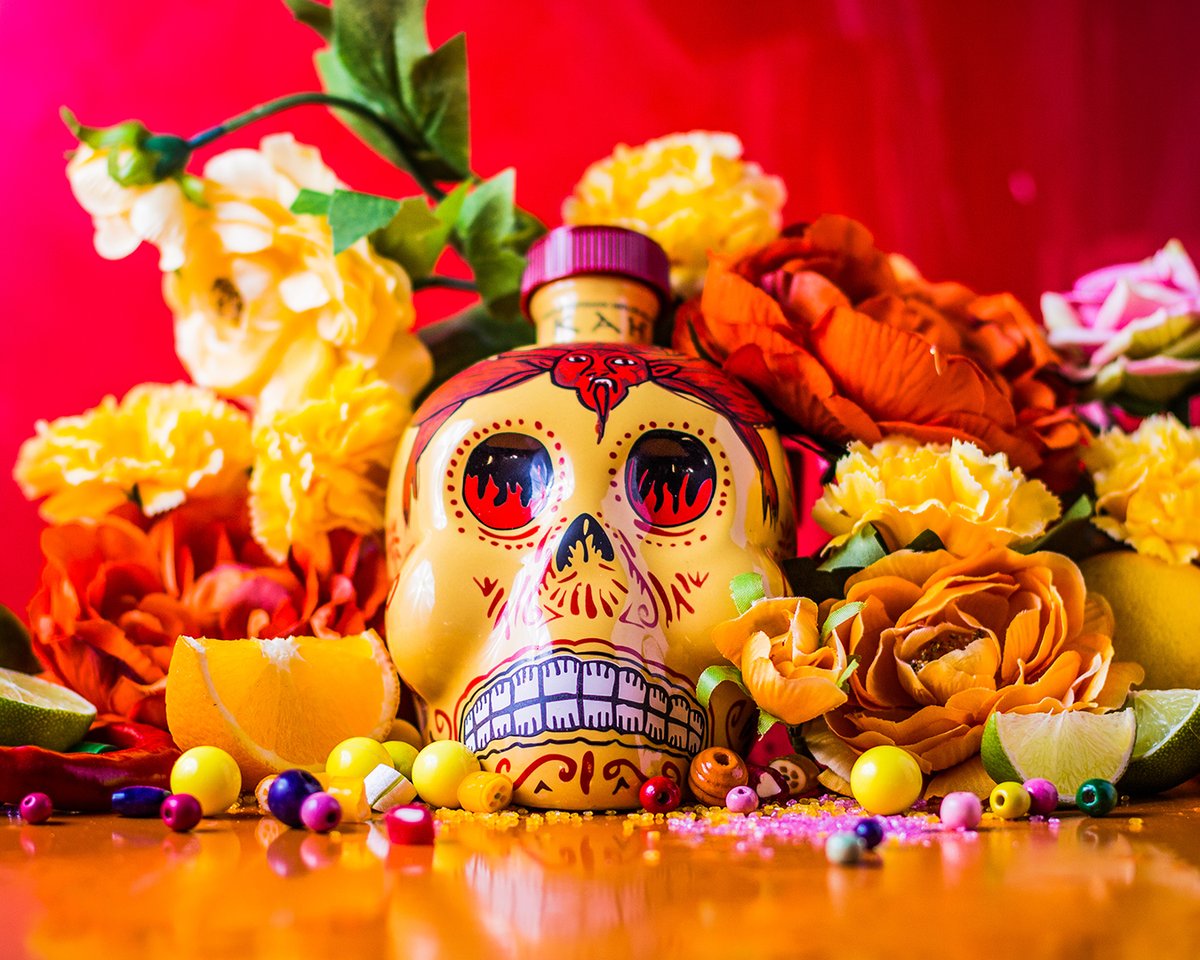 Master of Malt @MasterOfMalt
45 minutes ago
The London Economic has taken an in depth look at #Tequila @Pancho_Datos Reposado as its spirit of the week! Give the article a read to find out all about this tasty Tequila – and if you fancy giving it a try for yourself, you know where to find it 😉
https://t.co/PLo971LPOq
View on Twitter
0
1

Master of Malt @MasterOfMalt
3 hours ago
Featuring four 50ml bottles of the classic Kyrö Gin, the berry and rhubarb infused Pink Gin, the cask aged Kyrö Dark Gin and Kyrö Malt Rye #Whisky, it's like taking a miniature distillery tour from the comfort of your home!
https://t.co/lxquk63ndE
View on Twitter
0
3