Master of Malt
1 Comment on Tequila vs. Mezcal – what’s the difference anyway?

As part of our Mexican week coverage marking Cinco de Mayo, we break down the country’s two most popular spirits and ask you which one is your favourite. It’s Tequila vs. mezcal!

The 5 May or Cinco de Mayo is Mexico’s annual day of celebration. Booze naturally will play its part in the festivities, with spirits like mezcal and Tequila taking centre stage. But they’re not just delicious drinks, they’re spirits unique to the country, a part of Mexico’s heritage. You won’t find many industries that have such a network of farm distillers who operate on a small scale using traditional techniques.

There might be some of you that have always wondered what exactly is the difference between the two. Well, just to confuse matters, Tequila is in fact a type of mezcal but there are lots of factors that separate the two drinks, such as how and where they are made.

So we’re going to break down what the differences are between them in a fun, Lucha libre-style contest. And we’d love to hear your thoughts on which is your favourite and why. 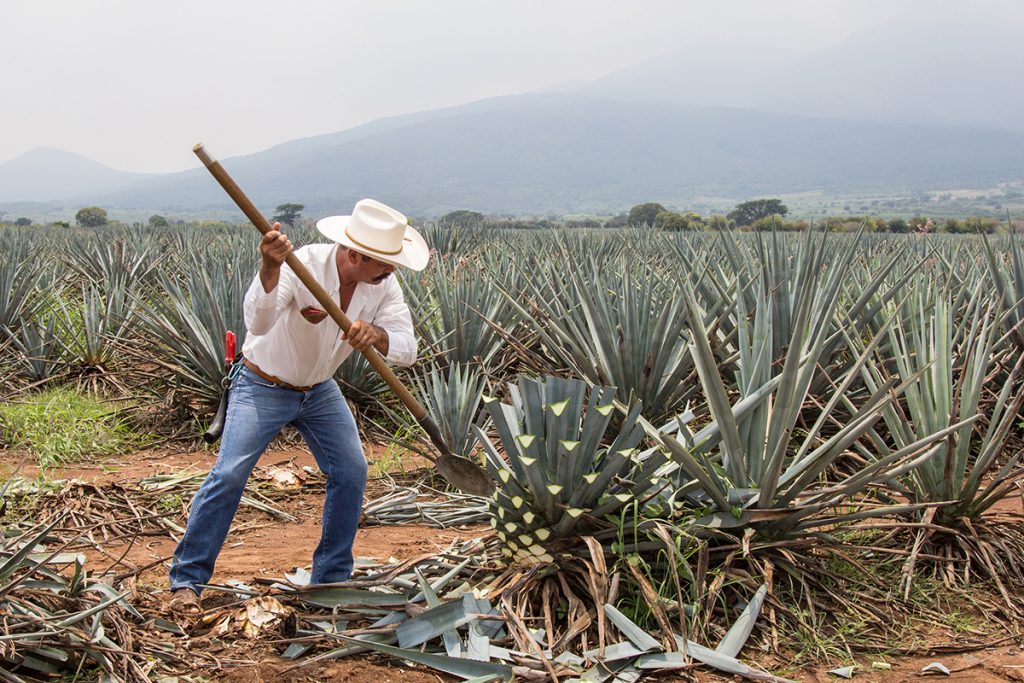 A jimador cutting the agave plant

Tequila vs. Mezcal round one: agave

Agave is what connects the two spirits as it’s the raw material both are made from. In fact, the word mezcal is derived from the Nahuatl word for cooked agave. It’s a tall, spiky green plant that resembles a cactus, and its rounded stem known as the piña is what’s harvested for spirit production. The piña is cooked to soften the fibres and transform its fructans into sugar.

A difference between Tequila and mezcal is the type of agave you can use. Tequila must be made from only a variety called Agave Tequilana Weber, more commonly known as Blue Weber, or simply just Blue Agave.

Mezcal, by contrast, can be made from more than 30 varieties of agave. While Agave Angustifolia Haw (or Espadín) is the most widely used and accounts for up to 90% of mezcal production, you’ll find mezcals made from the likes of Tobalá, Tobaziche, Tepeztate, Arroqueño and more, each of which has its own unique flavour.

Both Blue Weber and Espadín are quite intensively grown, the former in particular, but mezcal will also use semi-wild or wild agave often. 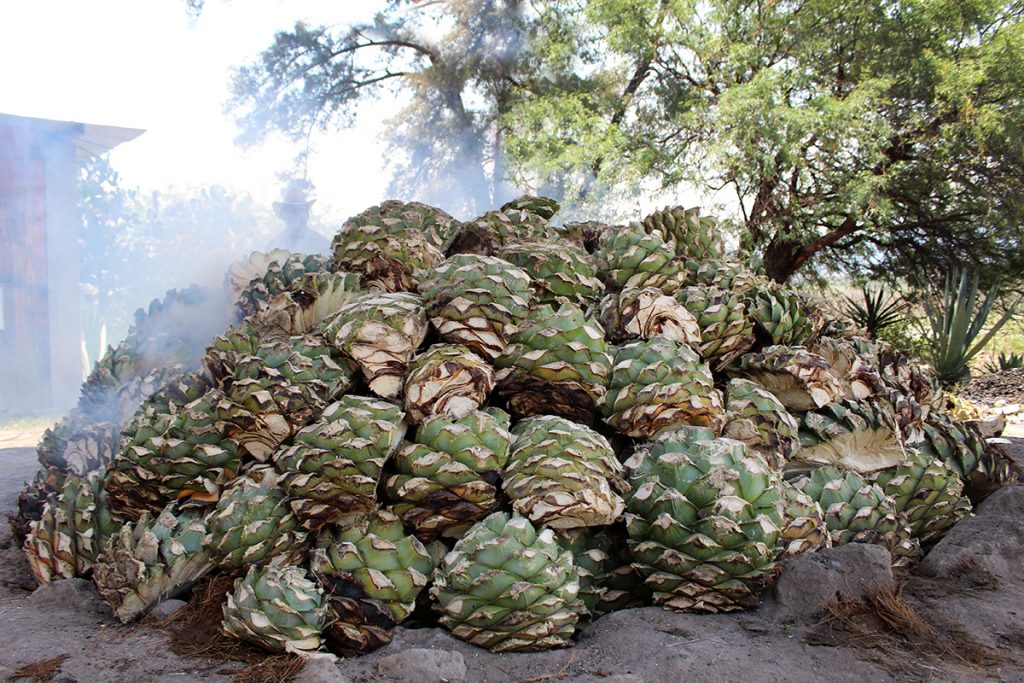 Tequila vs. Mezcal round two: region

While both spirits are only made in Mexico, each has its own set of established regions where production is allowed. Tequila, for example, is made in just five regions: Michoacán, Guanajuato, Nayarit, Tamaulipas and Jalisco. The latter is the most famous and productive and is where the actual town of Tequila is located.

Mezcal, in contrast, can be made in as many as nine different areas of Mexico. They include Durango, Guanajuato, Guerrero, San Luis Potosi, Tamaulipas, Zacatecas, Michoacán, Puebla and Oaxaca. Once again, the latter is the most well known, where upwards of 85% of all mezcal is made. 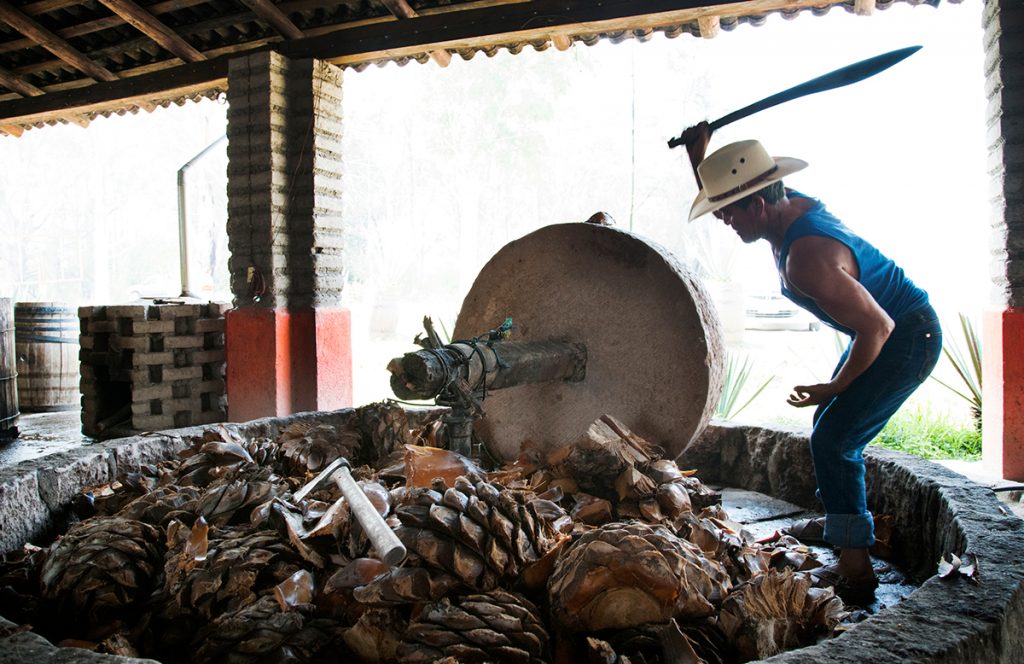 Some truly artisanal processes are still preserved, especially in mezcal

Tequila vs. Mezcal round three: production

While both Tequila and mezcal are made from the piña, the manner in which each spirit processes the core of the agave plant differs too. For Tequila, when the blue agave plant is ripe the jimador (farmer) removes the agave leaves with a sharp curved tool called a ‘coa’ and the agave is then typically steamed inside a giant oven, which converts complex carbohydrates in the piña into simple fermentable sugars. The cooked agaves are then milled and crushed to release the liquid inside, which is fermented and then double or triple distilled in stainless steel or copper pot stills

A more recent way of extracting the fructans from agave plants uses a machine called a diffuser.  This essentially subjects the agave to high temperature, pressure and often high acidity, to maximise extraction from the agave fibres and cook the carbohydrates (although sometimes the liquid is cooked after the process). This is fairly controversial, as it’s seen by many to favour efficiency over quality, and while not having to state on the label the distilleries using diffusers are commonly shared online.

In mezcal, by contrast, the agave is often cooked in fire pits lined with lava rocks and filled with wood and charcoal before the piñas are crushed in a mill, but sometimes done by hand or by donkey using a wheel called a tahona, to extract the sugars. After the agave is crushed, it is placed in wooden barrels to ferment with water and then distilled in either metal or sometimes clay pot stills. While some large-scale mezcal producers have adopted modern methods, artisanal mezcal makers continue to use this more traditional method, which is the source of the smokiness commonly associated with mezcal.

Tequila also allows additives to change the colour, flavour, texture, or sweetness of the spirit like abocado, which can be made from a combination of caramel colour, oak extract, glycerol, and sugar syrup. In mezcal, these aren’t permitted, with the exception of those labelled as such (see below).

Oh, and top tip: on a bottle of tequila or mezcal, the NOM number will inform you of the exact distillery where it is made, regardless of the brand. 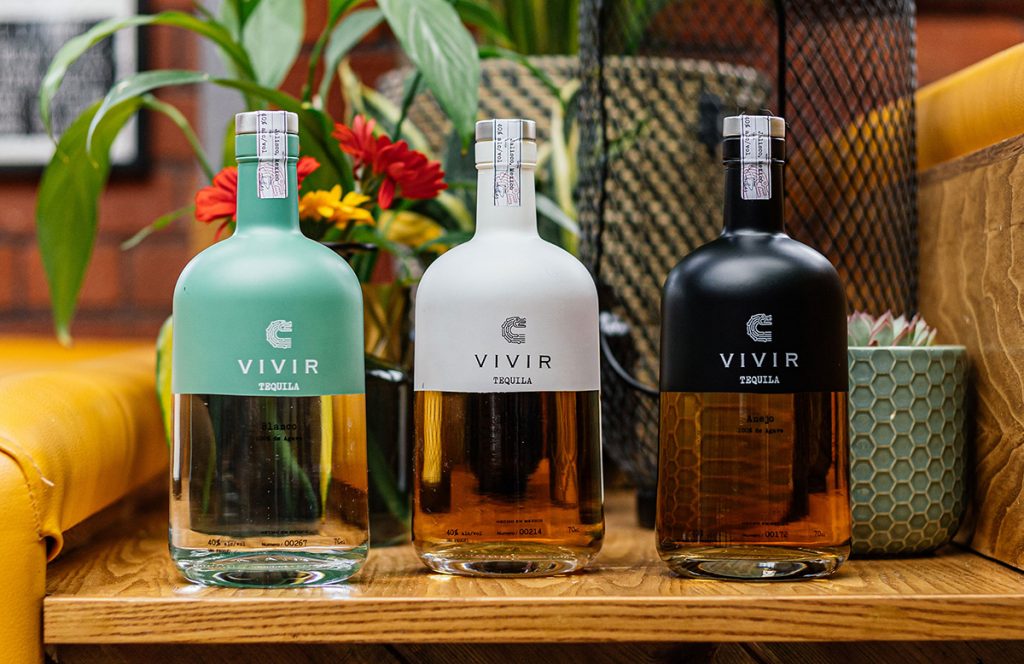 An example of a blanco, reposado, and añejo Tequila

Tequila vs. Mezcal round four: labelling and legislation

Both have their own age-based labelling designations, which are overseen by a respective Consejo Regulador (Regulatory Council) the CRT for tequila and the CRM for mezcal, who govern many areas of production and sale. Tequila is commonly divided into three varieties: blanco (or silver/plato, which is one aged for up to two months), reposado (2-12 months ageing) and añejo (1-3 years in oak vessels with a capacity of 600l or less). There’s also an extra añejo category, only introduced in 2006 and referring to anything over three years aged and cristalino, which is essentially añejo Tequila that has been filtered (often through charcoal) to remove the naturally occurring colours, and Gold Tequila which can be a mix of blanco and aged Tequila, but most often unaged (mixto – see below) blanco with abocado.

Mezcal’s grouping contains similar terms and times, but there isn’t a full overlap. The unaged style is categorised as joven (blanco is also used) which is also up to two months, while reposado is aged in wooden containers of any size or shape for 2-12 months. Añejo, by contrast, means aged in wooden containers that are less than 1000L in capacity for more than 12 months. Madurado en vibrio is also used, which is ‘aged’ in glass.

Tequila can be labelled in two different styles, Tequila 100% agave (100% agave de agave) where 100% of the fermented sugars come from blue agave, or just Tequila. A minimum of 51% fermentable sugars must come from Blue Weber agave for it to be called the latter, which means that the rest can be derived from raw materials like corn or sugar cane juice. These are often referred to as mixtos, a contrast to the more premium Tequilas which boast 100% agave.

Mezcal also comes in different styles based on how it’s made. The categories are: Mezcal, which can be made using more industrial techniques; Mezcal Artesanal, made in a specific region using specific artisanal processes; and Mezcal Ancestral, produced using entirely traditional processes and traditional materials (full explainer here).

Some mezcals are labelled ‘abocado con’ (not to be confused with the abocado used in Tequila), it’s flavoured by maceration with things like agave worm (gusano), damiana, lemon, honey, orange, and mango.  There is also ‘destilado con’ (re-distilled with a flavouring ingredient like turkey, chicken breast, rabbit (all raw), mole, plums, grains, nuts etc.), but these aren’t common.  Those containing Chicken or Turkey are labelled under the name Pechuga, meaning breast. 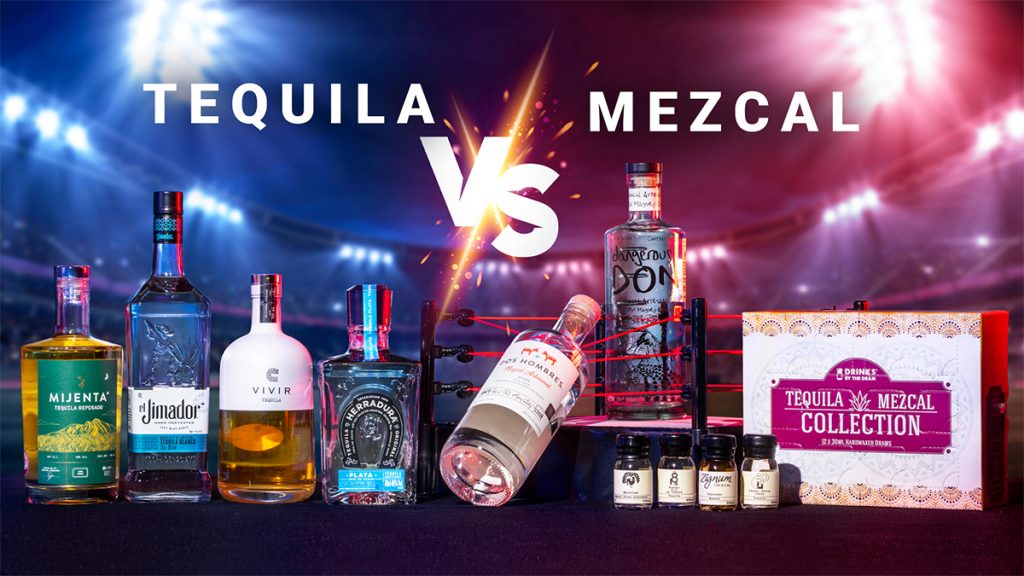 We’ve got some cracking recommendations coming your way tomorrow – but which will you prefer?

Tequila vs. Mezcal round five: taste

As you can imagine, all those different regions, raw material varieties and production processes means that Tequila and mezcal have their own unique profiles and characteristics. In a simplistic term, people will often describe mezcal as being Tequila’s smokier cousin, but there is much more to it than that.

The age and origin of the agave will affect the taste of Tequila, with blanco Tequilas being earthy and vegetal yet sweet, while an añejo Tequila is smoother with a blend of agave and oak flavours. Mixtos will typically have less complexity but are well suited to cocktails and mixers.

Mezcal’s greater variety of agave types and more commonly used traditional processes means it can have a more challenging flavour profile, from the vegetal sweetness of agave, to those classic smoky and meaty notes it’s known for, and anything from citrus, fruit, chocolate, bubblegum, and more. It’s also great in cocktails, but typically enjoyed neat too.

Tequila vs. Mezcal round six: you

So, all that’s left to know is what you prefer. And yes, we love both, and the world is richer for having the two categories. It’s just a bit of fun. Let your hair down. Go wild. And choose a side. We’ve got some top recommendations coming your way very soon…