We have a Master of Malt exclusive, a special gin liqueur, perfect for summer sipping. To tell us more, we speak to one of the people behind Reverend Hubert Garden Gin Liqueur, drinks personality extraordinaire Joe Wadsack.

One of the few consolations of lockdown was watching Joe Wadsack’s Drink Coach videos on YouTube. There’s no editing or fancy production values. Just Wadsack, sitting down, sipping, and talking. It helps that the wine he talks about is always interesting but what really matters is Wadsack’s personality, knowledge, and sheer exuberance. I’d happily watch him talk about Seedlip.

Joe is more than just a wine man, he’s also deeply into his spirits. So much so that he has collaborated with Thomas Lester on a spirits brand called the Reverend Hubert. Two years ago, they launched a winter liqueur, which we made New Arrival of the Week, and now there’s a Garden Gin Liqueur, exclusive to Master of Malt. It’s perfect for loading up with fruit, and lemonade, or tonic water, and sitting back and soaking up the sun. Should it ever return.

Before we take a closer look at this new summer bottling, I asked Wadsack about his wonderfully varied career. He was steeped in food and drink culture from an early age. His mother is Swedish and his father came over from Germany to England to work in the hospitality business in 1966 – “not the best time for a German to arrive,” he joked.

Wadsack senior worked for Trusthouse Forte hotels around the country, before opening a proto-gastro pub in Hampshire called The Three Lions. At one point, he employed legendary sommelier Gerard Basset. “Gerard Basset taught me to play table tennis,” Wadsack said. There’s not many people who can make that boast.

In his holidays, Wadsack would work in the family pub, regaling customers with his knowledge and enthusiasm for food and wine. A planned career as a pilot in the RAF didn’t work out. “I learned a lot about the world which horrified me,” he said. “Also I was too tall to be a fighter pilot which someone should have noticed before.” So Wadsack bowed to the inevitable and followed his love of wine by studying for a postgraduate degree at the University of Bordeaux despite only having O-level French.

Following this, he worked for Oddbins wine merchants in its ‘90s heyday, before a job in the wine department at Sainsbury’s led to him becoming a buyer at Waitrose. His career stalled, however, when “Waitrose made the reckless decision that senior buyers had to be a Master of Wine,” he said.  Studying for this notoriously hard exam, only one in 400 pass, according to Wadsack, did not suit someone who describes himself as having “massive ADHD.” 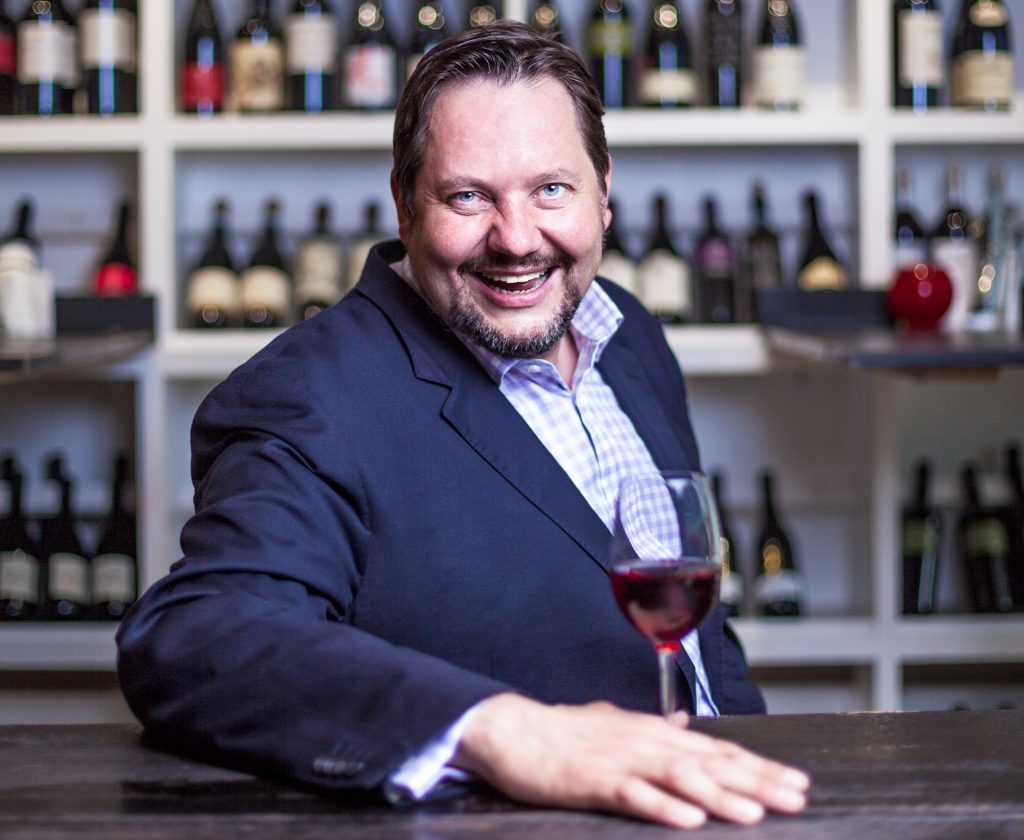 The whirlwind of wine

So with “a six-month-old child and another on the way”, as he put it, Wadsack left the job for life at Waitrose and found his true calling on television. He is one of TV’s genuine naturals, as ebullient and amusing on-screen as he is in real life. Wadsack is always performing which makes him such wonderful if sometimes exhausting company. Victoria Moore in the Daily Telegraph described him as “the whirlwind of wine.” “I love live TV, I’m a massive show-off. I did stand-up at university,” he said. In his varied career, he’s worked with Rick Stein, done Saturday Kitchen and the BBC Food & Drink programme with Tom Kerridge.

At the London Wine Show, Wadsack does a popular slot called Challenge Joe’s Nose where punters would bring mystery bottles for him to identify. Which invariably he did.

During Lockdown, Wadsack started the Drinks Coach. He’s now delighted to be out and about again. “I’ve reconnected more with bars and pubs. They are social catalysts, people leave their ego at the door, and can talk and connect over food and drink.”

This love and knowledge of cocktails and spirits shows in the enthusiasm with which he talks about the Reverend Hubert range. Wadsack was introduced to Thomas Lester, the inventor, and the two got on like a house on fire. Wadsack’s knowledge of the drinks industry was vital in getting it off the ground. 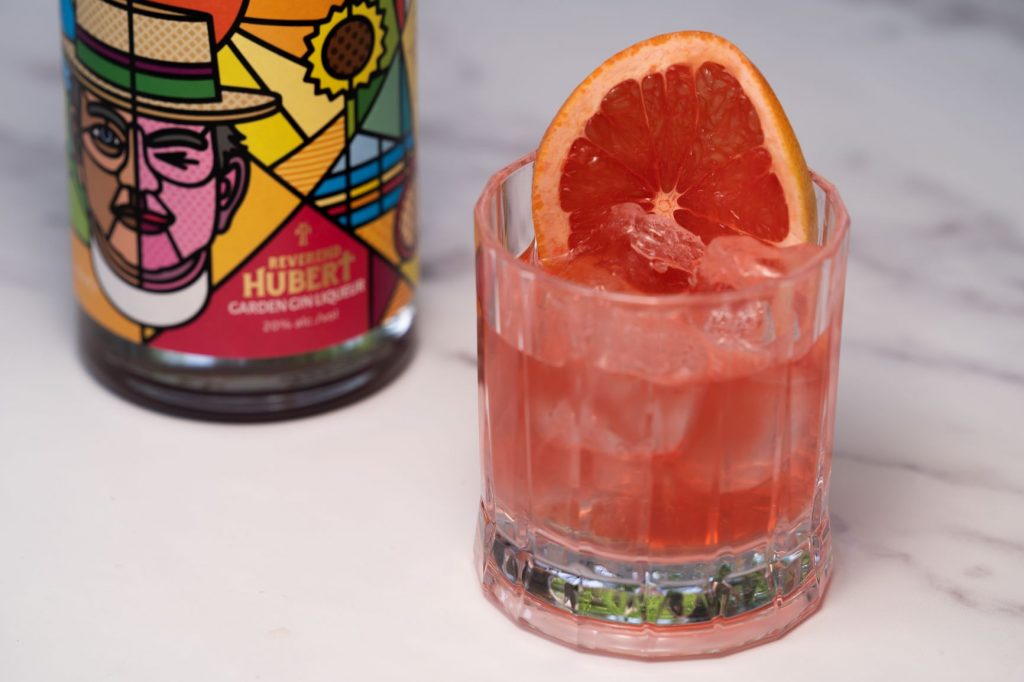 This new summer version, Reverend Hubert Garden Gin Liqueur, Wadsack describes as a “logical replacement to Pimm’s.” The recipe starts with a premium gin made to their specifications “heavy on coriander and liquorice – it tastes weird on its own.” It’s then steeped with Slovak plums, cranberry, pomegranate, and rhubarb. Rather than using fresh rhubarb, the flavour is too volatile, they make a concentrated distillate which Wadsack describes as “Kryptonite, you have to wear gloves when working with it.” A little goes a long way. All the colours and flavours are natural, and it’s bottled at 20% ABV.

Once the recipe was perfected, Wadsack and Lester handed it over to Ed Wood at Wood Bros distillery in the Cotswolds who he described as “very safe pair hands. He knows the science.”

Wadsack recommends drinking Reverend Hubert Garden Gin Liqueur with Hibiscus Tonic water from Merchant Heart, topped with soda water and a sprig of mint. Or serving it with ginger ale, an extra shot of gin garnished with mint and borage. But he’s also been having a lot of fun experimenting with it in cocktails. It makes a cracking Bourbon Smash and a sublime Bramble: “If Dick Bradsell were still alive, he would have used it instead of creme de mure” he said.

So what’s next for Wadsack? He’d like to expand the Rev Hubert brand into non-alcoholic things, like gravadlax, salmon cured with gin. But he’d really like to fly again. “I miss the flying terribly gets under your skin in a way sex does. I look outside even on an overcast day like today, I’d love to fly in that.”