Henry Jeffreys
No Comments on Cocktail of the Week: The Tequila Sunrise

It’s Mexican week here at Master of Malt, so we’re celebrating the joys of Patrón Tequila in a cocktail that dates back to the 1930s but owes its modern incarnation to 1970s California. It’s the mighty Tequila Sunrise.

What came first, the song or the cocktail? Well that’s an easy one, it’s the cocktail. ‘Tequila Sunrise’ by the Eagles came out in 1973 whereas the Tequila Sunrise cocktail has been kicking about in one form or other since the 1930s. Originally it was far closer to a Margarita or Paloma being made with lime juice and fizzy water, and it got its trademark reddish haze from crème de cassis rather than grenadine.

The Tequila Sunrise as we know it is far more recent. It was probably invented in the early 1970s by two bartenders Bobby Lozoff and Billy Rice at the Trident, a bar in Sausalito near San Francisco. It could have just been another cocktail that achieved a modicum of local fame before disappearing into oblivion, but for a chance meeting with an up-and-coming young beat combo known as the Rolling Stones. Mick Jagger tried the cocktail, loved it and the band and its entourage took it up as their drink du jour. In his autobiography Life (well worth a read, it’s brilliant), Keith Richards referred to Stones’ 1972 tour of America as “cocaine and Tequila Sunrise tour”. How’s that for a serving suggestion?

With publicity like this, how could the cocktail fail? It quickly became one of the best known cocktails in the world. The Tequila Sunrise’s heyday was the ‘70s and ‘80s. There was even a baffling thriller named after it starring Mel Gibson, Michele Pfeiffer and Kurt Russell that came out in 1988.

How to make a Tequila Sunrise

It’s not a difficult drink to make but I am sure that readers like me have had some pretty revolting versions. As always you need top quality ingredients starting with the Tequila. I’m using the delightful Patrón Silver Tequila made with 100% Blue Weber Agave. Next, you must use freshly-squeezed orange juice, NOT juice made from concentrate. Then there’s the grenadine. You can buy grenadine but it tastes better if you make it yourself from pomegranate juice (recipe below).

The basic Tequila Sunrise is nice but it can be improved with some judicious fiddling.  Adding a little lime and/or grapefruit juice freshens it up beautifully and takes it back into Margarita/ Paloma territory. And while we are going there why not go old school and use cassis to get that pretty sunrise effect, or perhaps Campari or Aperol? 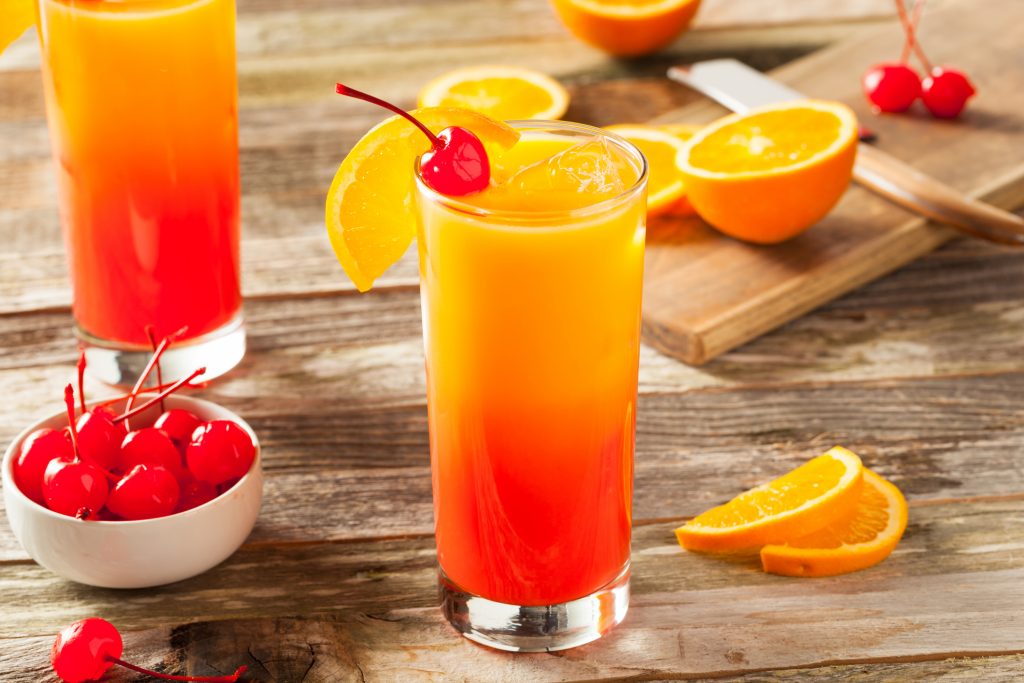 Right got your ingredients in place? Stick on Exile on Main Street, and let’s make a Tequila Sunrise!

Fill a cocktail shaker with ice, add the orange juice and Tequila. Shake and strain into a highball glass filled with ice cubes. Slowly pour the grenadine down the side of the glass to get that red haze. Garnish with an orange slice or a maraschino cherry, or both, rock n’ roll!

* Pomegranate juice (make sure it is pure pomegranate juice and not a drink containing pomegranate and sugar) is already sweet so you don’t need to add as much sugar as to water. A ratio of two parts juice to three parts sugar is ideal. Pour the pomegranate juice into a saucepan and gently heat, don’t boil, add the sugar and slowly and stir until it dissolves. Remove from the heat, pour into a sterilised jar (heated in the oven or with boiling water) and it should last in the fridge for months.