Henry Jeffreys
No Comments on Cocktail of the Week: The Adonis

As part of our Dryish January coverage, we’ve got a delicious cocktail with around half the alcohol but all the flavour of a traditional spirit-forward drink. A blend of sherry and sweet vermouth, it’s called the Adonis!

One of the joys of cocktails is also one of the main drawbacks: they are just so damned drinkable. Traditional spirit-forward cocktails are essentially ways of making high strength alcohol go down easily through the magic of chilling and sweetening. You have to sip a glass of rye, whereas a Manhattan is gone before you know it. A cocktail is a booze delivery system; perfect for when you want that jolt of alcohol.

But what about when you don’t? Happily, there is an answer, sherry. A good aged sherry, whether it’s a Fino, Amontillado, Palo Cortado, Oloroso or PX, will have much of the complexity of whisky. Both get their flavours from barrel ageing and, indeed, many whiskies are aged in ex-sherry casks so they actually taste of sherry.

Combine your sherry with a decent bottle of vermouth, especially one from the sherry region, and you have a recipe for extreme cocktail deliciousness but with less than half of the alcohol. You can make a great Dry Martini substitute by stirring one part Fino with one part dry vermouth with ice and strain into a coupe with a dash of orange bitters. This is known as a Bamboo.

Strong name, not so strong drink

But today, we’re making something more like a Manhattan called the Adonis. The recipe comes from a book called Schofield’s Fine and Classic Cocktails. It’s written by two brothers from Manchester, Joe and Daniel Schofield. Between them, they have won many many awards, worked in cocktail bars all over the world, including the American Bar at the Savoy, and collaborated with another pair of brothers, Asterley Bros, on a vermouth. Now, all that learning and experience can be found in one place. The book contains advice on making cocktails as well as classic and modern recipes.

The Adonis is named not after the figure from Greek mythology nor the Labour peer and educational reformer, Lord Adonis, but after a musical. Adonis was a long-running Broadway show in the late 19th century. It’s part of the long line of cocktails named after shows like the Rob Roy, and the Pink Lady. Sadly this habit of naming cocktails after musicals seems to have died out. One can almost imagine a Miss Saigon or an Oliver! though I wouldn’t fancy a Les Miserables. 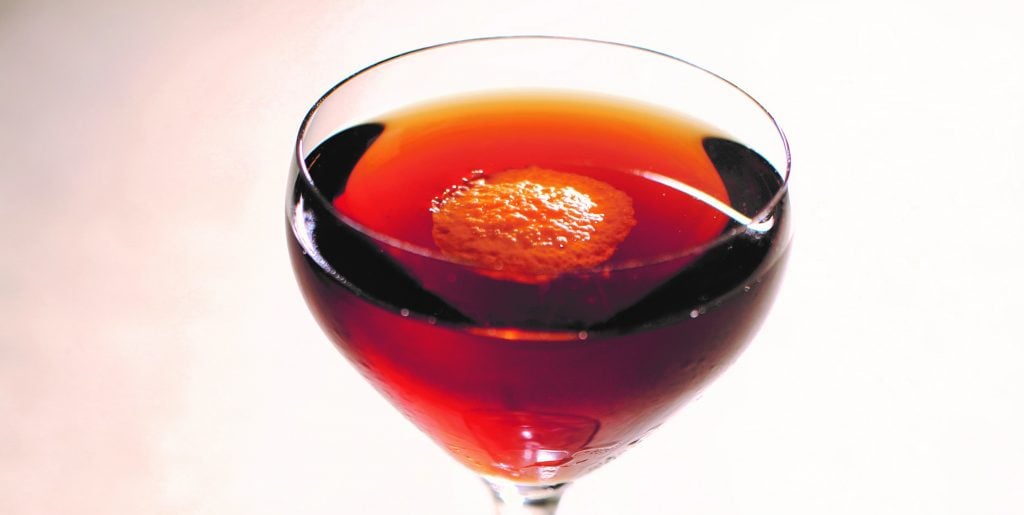 The Adonis, not as strong as you’d expect from the name

How to make the Adonis

Traditionally the Adonis is made with Fino sherry but the Schofield brothers have suggested using an Oloroso instead to make it richer. The Alfonso from Gonzalez Byass offers amazing richness and power for the money. The Schofields recommend their collaborative vermouth (well, they would, wouldn’t they?) but I have defied them and kept it 100% Jerez with La Copa, also from Gonzalez Byass.

The other non-trad element is sugar syrup; the brothers write: “sugar is a great flavour carrier and works well here, enhancing the relatively subtle sherry and vermouth. You won’t find this extra touch of sweetness in traditional versions of the drink, but we like how it underscores all the flavour notes”. If you like a fresher drink, feel free to leave out the sugar syrup. Or, even better, if you have some PX sherry knocking around, then add a little of that instead.

The result is something with all the depth of flavour of a Manhattan or Rob Roy, but with much less alcohol. A classic two parts rye to one part vermouth Manhattan will be around 35% ABV; the sherry version weighs in at less than 17% ABV. And it’s cheaper too. Your doctor and bank manager will be pleased.

Add all the ingredients into a mixing glass or shaker with ice, and give it a good stir. Strain into a coupette and garnish with an orange coin.

Master of Malt @MasterOfMalt
2 hours ago
Daftmill alert! We've got some of the Daftmill 2010 - Summer Batch Release here at MoM Towers, and we're holding a ballot, so you could have the chance to buy a bottle. Sign up now to be in the running.
https://t.co/KWLAWrXMeX
View on Twitter
1
5

Master of Malt @MasterOfMalt
15 hours ago
When something gets to its 74th iteration, you know it's got to be good – that's why the cask strength sherry bomb that is @AberlourVC A’Bunadh Batch 74 is our New Arrival this week!

Top ten no and low ABV drinks for Dry January