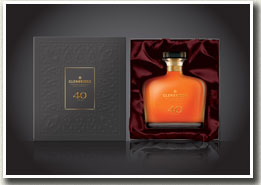 So, a couple of Tuesdays ago, I had possibly one of the most random evenings of my life. And I’m not talking about the end of the evening, where Myself, Joel Harrison (one half of caskstrength.net), Dr. Whisky, and Pierre from off of that there Connosr ended up in a basement Sherry bar late in the evening arguing the finer points of the various Port Ellen releases over Manzanilla and nibbles. No. I’m talking about the launch of Aldi’s 40 year old whisky.

Now, it’s probably best I don’t go too far into exactly how I, one of the UK’s largest whisky retailers, managed to secure an invite to the launch of another retailer’s whisky (let’s just say it involved the lads from Edinburgh Whisky Blog, and a bit of bribery / ‘couldn’t be arsed to come to London-ness’.

If I’m honest, the main draw of the evening for me wasn’t the fact that Aldi were launching a 40yo whisky, it was that the evening was being hosted by everyone’s favourite / least favourite (delete as applicable) whisky critic Jim Murray. Having spoken to Jim on a number of occasions, and read his bible every year with a mixture of anticipation, and foreboding, I couldn’t pass up the chance to meet the chap in the flesh.

So – the evening began in the (really rather nice) surroundings of Kettner’s restaurant in Soho, one of the oldest restaurants in London, as I was enthusiastically informed by the PR girls. We were popped into a room upstairs with only 7 or 8 seats, and introduced to Jim. I was personally rather surprised to see so few Journalist types at such a big launch (3 ‘mainstream’ Journo’s and 3 of us ‘whisky types’), but the presence of these two colossi rather made up for that: 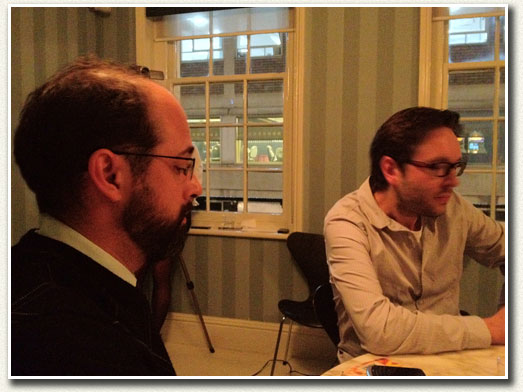 The Doctor and Monsieur Thiebaut. Contemplative

We began the evening with a talk from Jim about the way in which he approaches each tasting session, which is basically to cleanse his palate with Coffee. Cue some absolutely fantastic questions from Fiona Beckett about exactly what type of coffee, the countries he favours, the brewing apparatus and temperature used – to which Jim’s answer was (reading between the lines) “doesn’t really matter. Just coffee.”. We even went as far as to retire to another room so that the smell of the coffee wouldn’t affect the tasting. I’ll give him this, Jim is definitely thorough.

During the pre-battle coffee session, I had a chance to quiz Jim on perhaps the most fiercely contested issue (at least from his side) of recent times. That of Sulphur. Now, I’ve got a feeling that I may be somewhat insensitive when it comes to Sulphur, but (aside from a few late ‘70s Bunnahabhains which I’ve tried which just taste like bad egg custard) I don’t really mind it all that much. I can detect it with absolutely no problem, but it’s a long way away from a whisky-spoiler for me personally. I’ve even grown to look forward to the somewhat ‘gunpowdery’ character of some of the older Japanese stuff that we get from time to time, when Marcin stops destroying my bitters stock for long enough to actually bring some into the UK. Jim however, can’t stand the stuff. The merest hint of sulphur results in a whisky being scored in the late 60’s if it’s lucky.

So – I posed the question that I’d been waiting for literally years for: “So, Jim – do you really not like any whisky that contains even the merest hint of Sulphur? Surely there must be one or two that you’ve come across over the years that had other redeeming qualities?”, the answer? “Let me put it this way – do you know why they make pot stills out of copper?”. Fair enough, so. Referring to my notes at the end of the evening, I’ll show you exactly what I had written down: 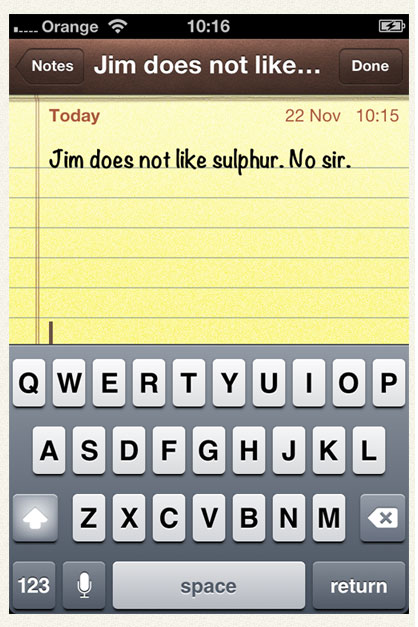 So, onto the main event of the evening, the tasting.

We were talked through the two whiskies that were on offer, the Glen Marnoch 24 Year Old, and the Glen Bridge 40 Year Old. Jim’s technique of warming the whisky prior to nosing and tasting caught me a bit off-guard if I’m honest (there was a good 2 or 3 minutes of hand-warming and breast-cupping prior to tasting) and I’m not really sure if I ‘got’ it. Jim even went as far as to say that when he’s doing his ‘big tasting sessions’ he has a bowl of warm water in front of him, in which he floats tasting glasses to pre-warm the whisky. All the heat served to do (for me personally) was release a load of volatility into the glass, but each to their own I suppose.

My tasting notes on the Glen Marnoch 24 Year Old read as follows: 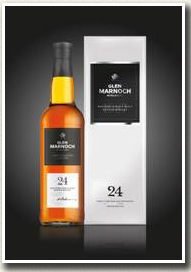 Palate: Lean, slightly bitter, not a huge deal of depth. An enormous hit of almost Saccharine sweetness before the rye spice develops into a slightly acrid note?

Overall: Not impressive, at any price.

And my notes for the Glenbridge 40 Year Old: 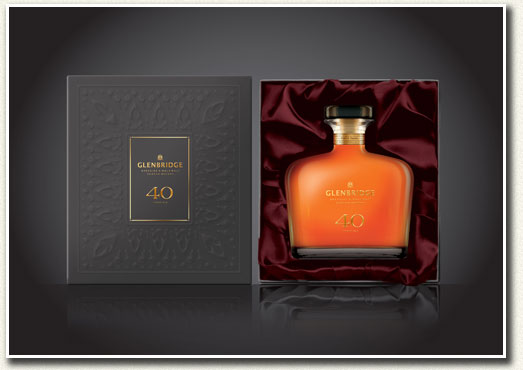 Finish: Touch of peppermint, the cask definitely makes itself known – maybe slightly over the hill, but all in all a pretty good finish.

Overall: A ‘good’ whisky. There’s one true test of whether a whisky is ‘good enough’, and that’s whether or not you’d reach for another glass. This is, and I did.

After the tasting, and in true game-show style, we were asked to guess the price of the two whiskies. I think my guesses, from memory were £55 for the 24yo, and £150 for the 40yo (and these prices would have been fiercely competitive). There were some genuinely astonished faces when it was revealed that the whiskies were to retail at £29.99 and £49.99 respectively.

Now, without wishing to start any mudslinging, lawsuits, or punch-ups, I would be very surprised if these two whiskies (the 40yo especially) weren’t loss-leaders. On the 40yo, the bottle and box alone must be £6-8 worth, the duty’s £7.77, and the VAT’s £8.33. That leaves about £23 to buy the whisky, have it bottled, have it shipped out to the stores, and pay the staff to sell it (not to mention the rates, electricity bills, PR…). This doesn’t seem feasible to me. Now it may well be that the broker that Aldi are using are supplying them the whisky at the £20-mark, but if they are doing so, it absolutely isn’t sustainable, it’ll be a one-off favour (as evidenced perhaps by the fact that there are only 3,000 bottles of each whisky available across Aldi’s 450 stores).

I’ve seen various reactions to the prices so far, ranging from “we’ll all be pretty lucky if we get hold of one” (caskstrength.net) to “it’s disrespectful to the folk who made it 40 years ago” (Stephen Marshall, Global Brand Ambassador for Dewars).

So – how does this make me feel personally? The fact that the somewhat exclusive world of older whisky is going to be opened up to those who otherwise may not get the chance to sample such venerable drams can only be a good thing, regardless of who it is that’s doing it, or what their motive is providing the whiskies are good.

The 24yo is, in my opinion, a deeply bad whisky, and anyone who manages to pick up a bottle of this will be gravely disappointed, and what’s more, potentially put off good whisky for years to come. This is sad.

The 40yo, on the other hand is really pretty bloomin’ good, and at £50 is an absolute steal. My sincere hope is that people will buy this and try it, as opposed to buy it, pop it on the shelf, and point to it for the next 20 years and say “That’s 40 years old, that whisky is”. In reality, I’m not sure how much of it will get drunk, but we can live in hope.

So with 450 Aldi stores set to release the whisky on the 1st of December, and only six bottles available per store, I’m going to make a prediction here, dear reader. You’re probably not going to get one. “Oh, but that’s unfair Ben – I really want some good value, high quality 40 year old Whisky”. Well my friends – I think I may have a way around your conundrum. Please find here a link to our superb selection of 40 Year Old Whiskies starting from the (sustainable) price of only £118.80. My pick of the bunch? Definitely our very own 40 Year Old Speyside at the price of £139.95. Okay, so it’s not quite Aldi prices, but it’s pretty low, and the whisky’s frankly astonishing.

And the result of the reason for going to the thing in the first place (the evening with Jim Murray)? I found him to be a very personable, really quite humble (in spite of his frankly astonishing achievements in respect of his whisky bible) chap, with some very strong opinions about certain aspects of the industry and journalism (some of which I share, some of which I don’t). 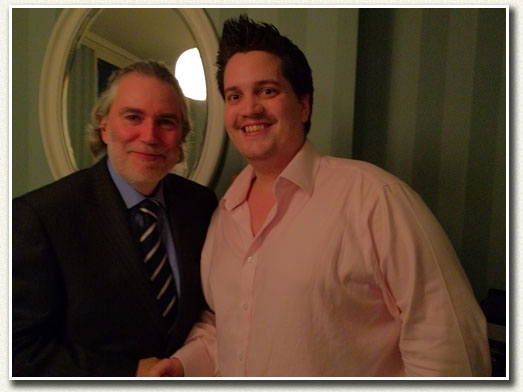 55yo Whisky Liqueur – The World’s Oldest