Adnams Release Their First Ever Whiskies!

Jake Mountain
No Comments on Adnams Release Their First Ever Whiskies! 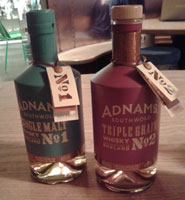 When asked if I fancied a trip to Southwold I didn’t have to do a lot of thinking. A chance to visit a lovely coastal town, get some fresh, sea air in my lungs, escape the madness of the festive season AND visit the fantastic Adnams distillery to taste two brand new English whiskies?!

Um, yes. I think I can probably manage that, at a push. So off I went to Waveney to meet up with Jonathan Adnams, Chairman and fourth-generation brewer, and Head Distiller John McCarthy for a bit of a shimmy around the distillery and to taste two new, unique English whiskies prior to their release.

The first ever Adnams whiskies. Ever. 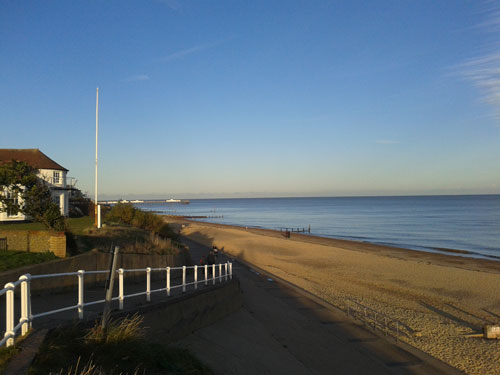 Two and a half years ago, we (read Ben) visited the Copper House distillery, as it’s called, to take a look around their fascinating operation and sample the still maturing, not-yet-whiskies in the brewery cellar. Taken from two of just twenty initial casks laid down almost exactly 3 year ago, he sampled part of what would become the two whiskies Adnams have just released today. 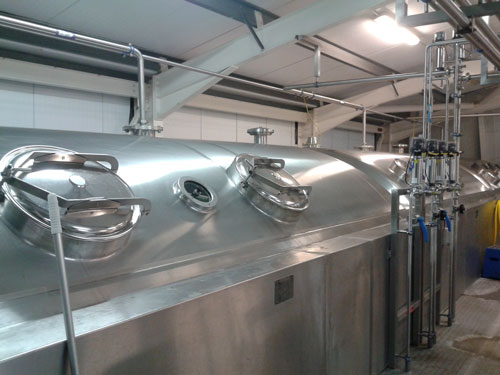 If you would like to know a little more about the distillery setup (it’s unique: fermentation vessels instead of traditional washbacks, an energy efficient ‘beer stripping column’ instead of a traditional wash still etc.), there’s some more info to be found on our first Adams blog post. I’m going to concentrate on the new whiskies with a couple of updates too towards the end. 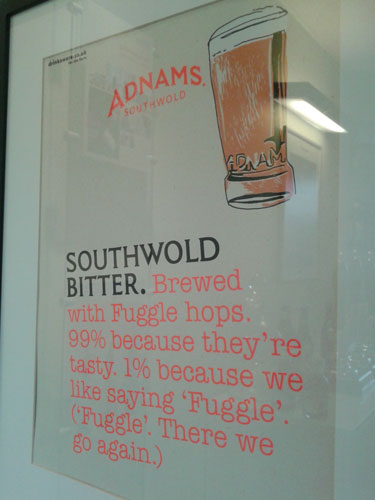 I found this in reception. We like this. Lots.

So, onto the whiskies! They were both matured in virgin oak, the intention being, from the very beginning, to produce an interesting and enjoyable whisky that they could release at three years and one day old (the age at which it can legally be bottled as whisky). They’re also both non-chill filtered, as all Adnams’ spirits now are, including the vodkas.

The single malt is aged in virgin French oak, whilst the ‘triple grain’ (barley, wheat and oats) is matured in virgin American oak casks, both receiving a medium-full toast (but untoasted cask heads). They’re very much siblings, but like siblings whilst there are clear similarities, there are overt differences too – as there also is with their hoppy cousin Spirit of Broadside (an ‘eau de vie de-biere’ matured in heavily toasted Russian oak, which will soon be a 2 year old spirit itself). 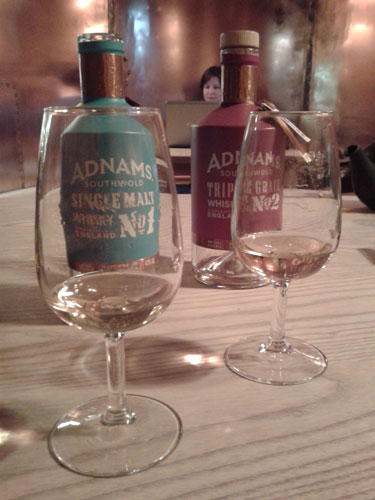 Some of my tasting notes are quite specific here. Specific about sweeties; types of sweeties and bits of specific types of sweeties. it’s quite possible that you need a PhD in sweeties or need to be some sort of world-leading expert on sweeties to understand them, but I hope not! 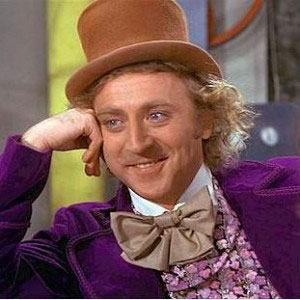 Oh, you know this picture is used in memes? You must be really in tune with the world. 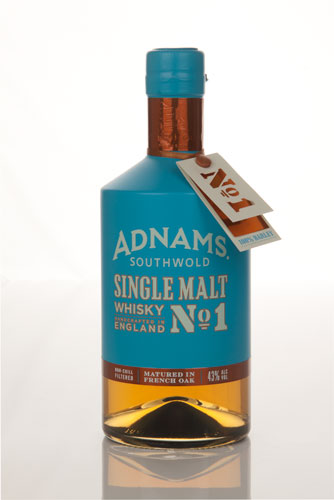 Finish: More sweeties, a little spicy caramel and the cracked outsides of Smarties (but not the chocolate insides), fruitiness too. 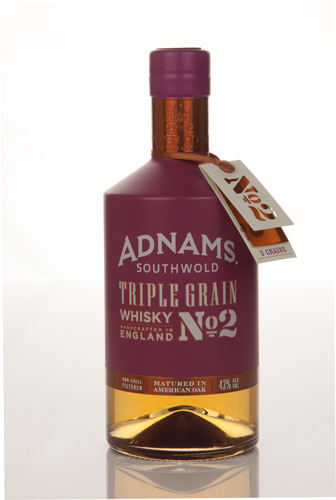 Nose: This one lures you in with approachable toasty oak, white peach blossom, some spicy grain, the bubblegum in the background this time. Smarties (chocolate and all!) as well as 50% cocoa dark chocolate. The coconut centre of Bounty bars, that’s it! Nice. A little lychee, orange Revels (just the inside bit, mind), sugar that’s just catching. A touch of lime.

Palate: White pepper and spices, orange and a hint of powdered chocolate.

Finish: Quite comforting and almost beer like (I could easily be projecting that) with a little rich honey and Bounty bar (yes, including the chocolate now!).

These are two unusual, tasty, young whiskies. They’re also limited editions, produced from a combined total of just 20 barrels. The reasons for this are partly to do with storage (they didn’t have their whisky dunnage back then, which they have now also outgrown) and partly to do with the fact they had no way of knowing that the last three years would see them become the highly successful and globally recognised distillers that they are today.

Just to clarify – that is exactly what they are. Adnams have been making some of our favourite beers for 141 years, and have only been distilling for 3, but recently took home the IWSC Trophy for their grain-to-glass Adnams Copper House Distilled Gin. Impressive stuff. 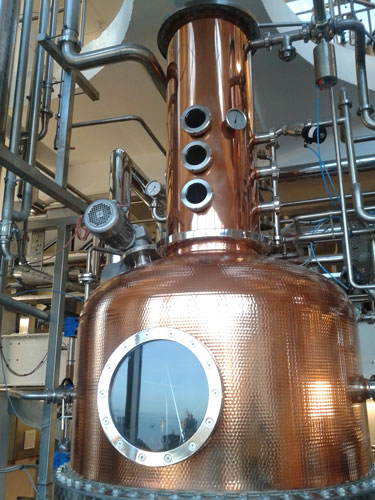 Carl’s an adaptable guy, you know. 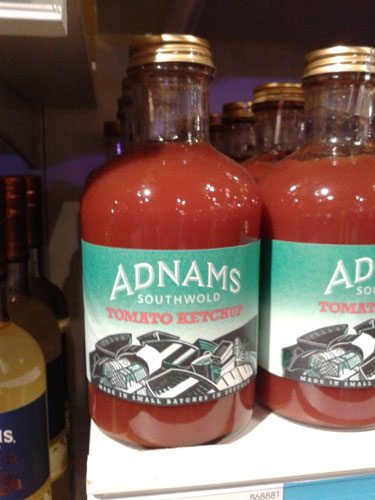 Okay, maybe not *that* adaptable.

No, the ketchup isn’t distilled (as far as I know…), it’s from the Southwold branch of Adnams Cellar & Kitchen Stores, where a special launch party was held last night. 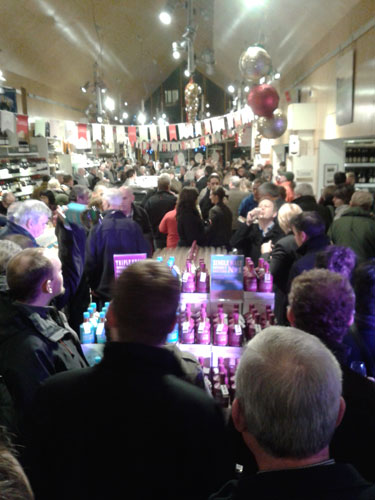 No, that’s alright. I didn’t want to move anyway. 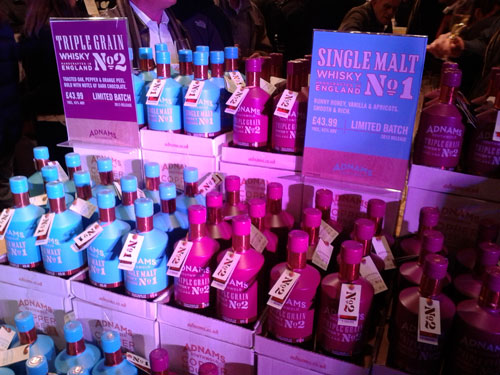 In the coming months there’s plenty more to look forward to, with an Adnams Triple Sec due for release around May 2014, followed by an apple eau de vie in August. In terms of whisky, once the limited editions have sold out, there will be no more until November 2014. (This is due to a gap in production brought about by the storage issues mentioned above, something that should be a forgotten problem by 2016.) Finally, and excitingly, there’s also a Rye whisky in the works, due for release in 2015.

The distillery is now producing around 60,000 litres of whisky a year, which is about capacity taking into account the need to also use their Carl still for their other spirits, especially their highly popular gins. That is, unless they get another Carl. Although, if they do get a second still, I for one hope they nickname the new one Lenny. 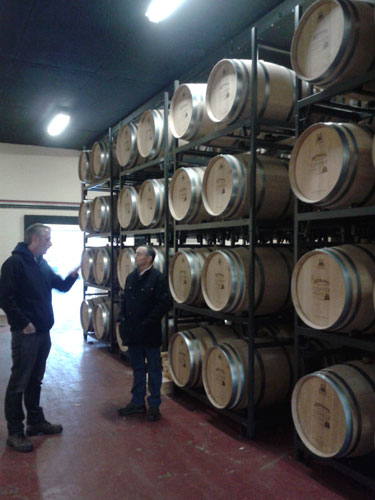 John and Jonathan show me around the Adnams Whisky Dunnage. 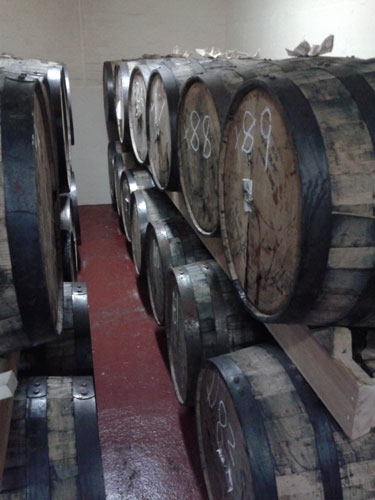 Up until now, all of of Adnams’ aged releases have used virgin oak, which readily lends its influence to the spirits at younger ages. An entirely conscious and very expensive decision made early on (used Bourbon casks cost around £70-£80, whilst the new oak ones cost over £500!). They do also, however, now have 89 Bourbon barrels full of maturing whisky. Jonathan explained that there is no set plan for these as yet – very much a case of ‘it’ll be ready when it’s ready’. 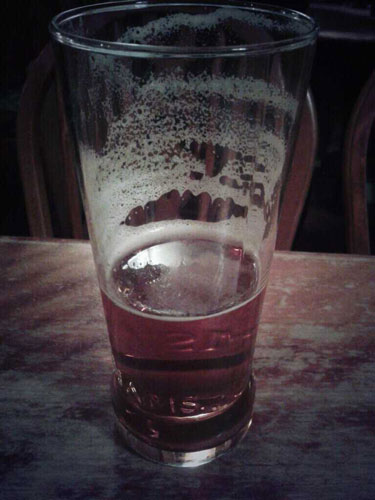 Well, couldn’t go to the home of Adnams without trying a couple of ales, could I?
In The Lord Nelson, if you were wondering.

Master of Malt @MasterOfMalt
9 hours ago
Whip up a Strawberry Shrub #cocktail with Piston Gin! Shake your gin with lemon juice and ice, strain into a glass, add crushed ice and a drizzle of berry cordial, then garnish with fresh berries.

Master of Malt @MasterOfMalt
13 hours ago
Made in the Amazon rainforest with a host of native botanicals, Canaïma Gin is deliciously sharp and fruity – and the brand supports reforestation!

For Christmas this year…