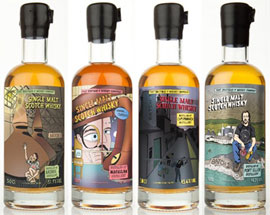 Those of you who inhabit the twittersphere may have noticed that we’ve copped a bit of flak recently from the hardcore whisky community out there. The reason? Well – we keep releasing products (steady yourself dear reader) other than whisky.

Gin, Absinthe, Summer Fruit Cups and the like are all well and good, but, well, they’re not whisky. So – in a twin-pronged attack designed to 1) make my life easier whenever I meet ‘whisky people’, and 2) do something almost unspeakably cool – we’re launching a whole brand-spanking new independent bottling label.

The genesis of this label came about for a reasonably simple reason. Previously, we here at MoM had no method to put out ‘single malts’ from named distilleries. As odd and indeed unfeasible as this sounds – it’s true. We’ve got our Single Cask Range, for natural cask strength single cask releases. We’ve got our Secret Bottlings Series for those secret drams where we’re not allowed to reveal the sources, but if we wanted to release a single malt in its truest and most common sense (a blend of casks from one distillery)? Not so much.

There are many instances in the past where we’ve found ourselves with the opportunity to buy a parcel of great quality stock, but without the opportunity to sell it on to you lovely people. As ever, the quality of the whiskies within the bottles is absolutely paramount. We’ll only ever bottle something that we’re completely happy with – but the number of opportunities to bring exceptional whiskies to market increases hugely when we’re not constrained by only bottling single casks.

So – let me introduce you to the newest additions to our whisky stable: A richly sherried Macallan, a punchy little Ardbeg, a wonderfully complex Caperdonich, and (Fanfare please) a Port Ellen. All bottled by ‘That Boutique-y Whisky Company’*.

The first thing you’ll notice about the bottles is that none of them carry any age statements. There’s a pretty simple reason for this – we’ve got absolutely no idea what age each of the batches are going to be until we get the opportunity to purchase the stock, and having a range with age statements that could conceivably bounce around (even within individual distilleries) by as much as 30 years between batches doesn’t make much sense. We’ve also used a pragmatic approach to the preparation of the whiskies contained within each batch. For example – the Macallan in this first batch contains a bulk of reasonably old whisky, but it’s had a portion of much younger, more heavily sherried Macallan added to it in order to give it a bit of a lift. This has led to what we think is a superb flavour profile, but would give a somewhat misleading age statement (as I’m sure you’re all aware – it’s the youngest whisky in a single malt (or indeed blend) which dictates the official ‘age statement’).

The second thing you’ll notice is the rather fantastic hand-illustrated labels. These labels portray scenes inspired by the wonderful, whimsical, and sometimes downright daft stories and legends generated by the distilleries themselves over their many centuries of production. All the bottles are individually numbered, so whilst we don’t want to use the ‘c’ word (not that c-word – the other one) – we’ll probably find that these become somewhat ‘sought-after’ over the course of the next few years. 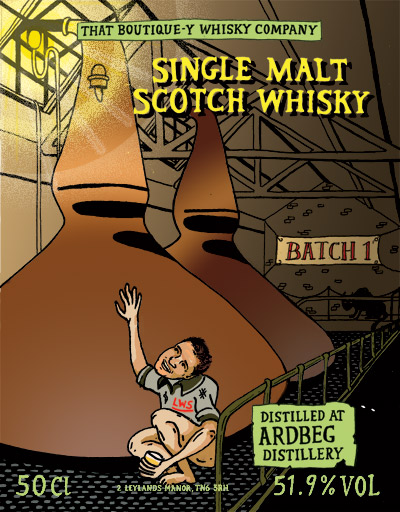 The label for the Ardbeg bottle portrays perhaps the world’s best-known Ardbeg collector – Geert Bero reaching up, entranced, to the source of the Ardbeg Spirit Still’s power – its spirit purifier. This unique device allows some of the heavier compounds produced during distillation to fall back down into the still and be recycled – producing a softer, more floral spirit.

Nose: Big salty peat chased by twirling vanilla and espresso. Hot on the heels are oranges and lemons with leather and malty cereal notes bringing up the rear.

Palate: A dazzling flavour of acacia honey on peat smoked oatcakes with slices of lemon and orange placed on top.

Finish: On the finish we have classic Ardbeg: sea salted caramel, tidal waves of smoke and black coffee. 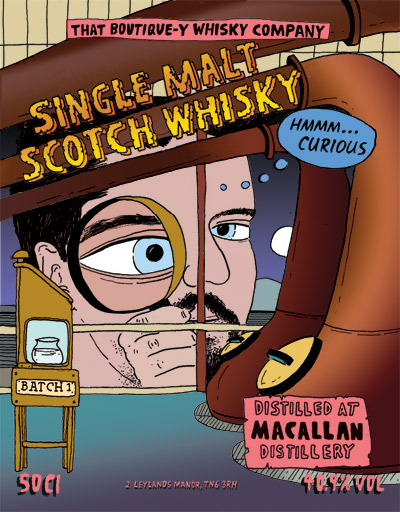 The label for this classic Macallan features a suspiciously familiar-looking giant peering through the windows of Macallan’s still-room, at the ‘curiously small’ stills contained therein.

Nose: Christmas cake leading to powerful, almost calvados-like apple, then there is a wealth of dried grape-based fruits, developing into notes of apple tart sprinkled with cinnamon. Finally baked apple and a rich sherry aroma settle in.

Palate: A really soft body that blossoms in the mouth – with notes of stewing sultanas and prunes with the sweet but slightly acidic touch of Bramley apple.

Finish: A rush of baked apple scattered with demerara sugar and a big chunk of toffee followed by lingering vanilla essence.

Overall: Really well developed notes of dried fruit and apple on the nose leading to a beautifully soft mouth-feel, followed by an assertive finish. This Macallan demonstrates great balance; each flavour is bold, but at no point compromises the structure of whisky. 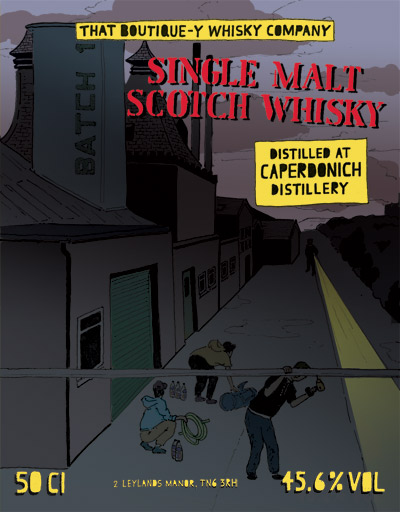 ‘ello ‘ello ‘ello – what’s going on here then? Well – legend has it there was a pipe containing whisky which ran from the Caperdonich distillery to its next-door neighbour and sister distillery, Glen Grant. In fact this is merely an urban legend: The pipe contained nothing more delicious than recycled water. Nevertheless we thought the myth was enchanting enough to recreate a scene of night-time miscreancy (a ‘donich caper if you will).

Palate: A creamy mouth-feel with rhubarb slathered in custard, followed by salt and pepper.

Overall: An immensely aromatic whisky which is almost overpowering at first before succulent estery flavours emerge with sweeter notes of custard and cream. 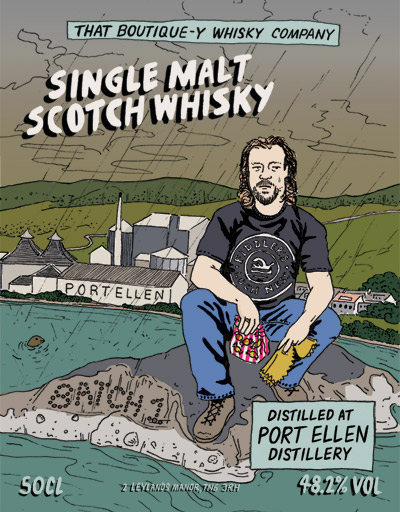 Perhaps the most iconic distillery in the world – Port Ellen. The label features a shot of the outside of one of the remaining warehouses – the site of the now legendary ‘Port Ellen Picnic’ organised by the arguably even more legendary Jon Beach – proprietor of the Fiddler’s Whisky Bar in Drumnadrochit. It’s Jon that we see here on the label, holding a Chamois Leather and a bag of Sherbet Lemons (both classic Port Ellen Tasting notes).

Palate: Immensely soft and delicate with smoke and lemon leading the way, followed by marshmallow and gentle brine.

Finish: A small wave of salt and peat leading to a spectacularly long finish of mellow candied fruits, with a lingering hint of Chamois Leather.

Overall: Such a gentle whisky – yet it hasn’t lost its peaty bite that pinches at the beginning of each sip before mellowing gloriously.

So – there we go. You can expect to see many additions to That Boutique-y whisky company’s range over the coming few months – each with its own hand-designed label.

Right-ho then. Better go and make another Gin I suppose.

* to answer the inevitable question – we’re not putting the Master of Malt name anywhere on the label, because we’d quite like at least a few other retailers to have the opportunity to stock these without having our branding plastered all over them J